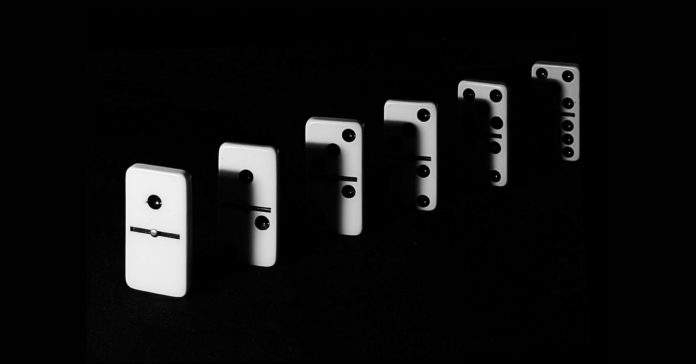 Everyone has probably played with dominoes. At some point in your childhood, chances are that you tried this game: Line up a bunch of dominoes in a row and then knock one over. Soon the rest of the dominoes topple in a chain reaction. I’m not sure why this is fun, but it is.

But how about something even cooler? What if you have a small domino knocking over a bigger domino? This is indeed possible. But is it possible to ramp up the domino size so much that a huge domino could tip over and crush a car? This was the goal in a recent episode of MythBusters Jr., where I am the science consultant.

Physics research has shown that a domino can knock over another one that is 1.5 times taller. OK, this is what makes physics so cool. We don’t just study protons and black holes. Physicists also write papers about dominoes. Check out this paper on arXiv.org. Also, there is this much older paper (from 1983) in which someone described this taller domino crash as a way to demonstrate a nuclear chain reaction (without actually blowing stuff up).

Also, there is this very nice video showing a domino chain reaction starting with a super, super tiny domino and leading to a 13th domino that is 1 meter tall.

Notice the claim that the 29th domino would be as tall as the Empire State Building (381 meters tall). Is that true? Let’s look at the math of increasing sizes. Suppose we start with a domino that is 1 meter tall. How big will the next one be? It will be 1.5 multiplied by 1 meter to give a height of 1.5 meters. What about the next one? Again, we multiply by 1.5 to get a height of 2.25 meters. This phenomenon is called a geometric sequence, where each successive number in a list is found by multiplying by a constant.

Since multiplication can be tedious after a while, let’s make a computer program to calculate the height of the 29th domino assuming the starting domino is 5 millimeters tall. Wait! Don’t panic. Just because I said “computer program” doesn’t mean this is going to be crazy complicated. Computers are our friends (for now), and you should learn to use them. Now is a great time to start.

Check out this code for a geometric series. You can click the Play button to run the code and then click the “pencil” to go back and edit the code. Yes, you can edit the code if you like (and you should).

From the output of this program you can see that the 29th domino would be more than 400 meters tall—even taller than the Empire State Building. Yup. Things can get pretty big fairly quickly with a geometric series. Let me go over the important parts of this very short program.

Now for a test. See if you can modify the code to see how tall the 29th domino would be if the multiplicative factor was 1.4 instead of 1.5. What if you want to calculate the size of the 100th domino? Try it. If you change the code and run it—congratulations. You are now a computer programmer.

What about the dominoes in MythBusters Jr.? There are two major differences. First, they started with an actual domino. According to this site on dominoes, the standard domino is 1 and 7/8th inches tall (15/16″ wide and 1/4″ thick). The second difference is that all the measurements are in Imperial units (inches and pounds and stuff) instead of metric units. It’s not a big deal, but I just like using metric units (like most of the world). OK, we will do it both ways.

Here is a similar program that calculates the height of dominoes needed to get one big enough to possibly crush a car. This code is a bit more complicated, but you can look at it if you like. From this, I get the following graph of domino height vs. domino number.

Here you can see that the 12th domino would have a height of about 4.12 meters. But what about the mass (and the weight—yes, weight is different than mass)? Let’s assume that each domino has the same density, where density is defined as the mass per unit volume of a material. Since the 12th domino is 86 times taller than the original domino, wouldn’t the mass also be 86 times greater? Nope. It’s even more massive than that.

Let’s just plot this mass of the 12 dominoes. I am going to use metric—but don’t worry, I will convert to pounds for you too.

But wait! If you’re thinking this domino chain reaction is as simple as a few lines of Python code, you are forgetting something. Someone has to actually build these things. Oh sure, I could probably make the first 5 dominoes—but what about those last few? Can you just make them out of wood? That’s possible, but it would have to be wood with the same density as the original domino. The other option is to build a metal frame and then fill the domino with stuff to make sure the mass is correct. But be careful, you also need to keep the center of mass in the center of the domino. It’s a tough build—that’s for sure.

OK, let me leave you with one homework question: How many chain-reaction dominoes would you need such that the last domino could fall over and crush an aircraft carrier? How much space would you need to make this happen? The good news is, I doubt anyone will ever build that domino.

How Super Computers are shaping the Future of Humanity

GizmoCrazed - January 18, 2017 0
How Super Computers are shaping the Future of Humanity Source - WhoIsHostingThis?

R.I.P., Opportunity Rover: the Hardest-Working Robot in the Solar System

This Is How Smartphone Market Will Look Like in Next 5...