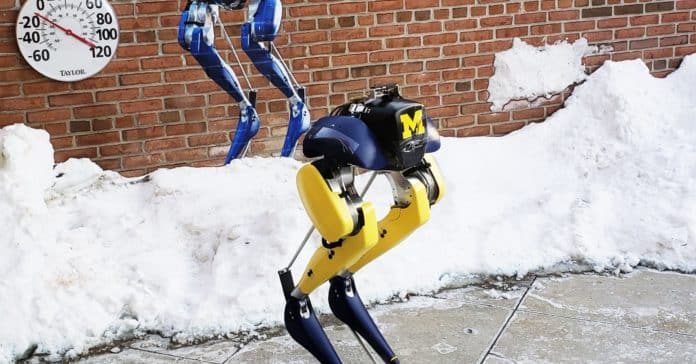 This is not a story about how the polar vortex is bad—bad for the human body, bad for public transportation, bad for virtually everything in its path. This is a story about how one being among us is actually taking advantage of the historic cold snap: Cassie the bipedal robot. While humans suffer through the chill, this trunkless pair of ostrich-like legs is braving the frozen grounds of the University of Michigan, for the good of science.

“When we saw the announcement for the polar vortex, we started making plans to see how long we could operate in that kind of weather,” says roboticist Jessy Grizzle. “We were going to tie a scarf on her just so it looked cute, but we decided people would think that was keeping her warm and affecting the experiment, so we didn’t.”

Scarves aside, this is vital research for a future in which robots tackle not just polar vortices but any number of other brutal environments. Because when you or I go out in -50 degree weather, the concern is that frostbite will set in pretty much immediately. Robots, of course, don’t have to worry about their tissue freezing, but they do have to worry that their components might not be engineered to withstand the cold.

The most obvious concern is the toll on their batteries: The colder it gets, the slower the chemical reaction that ultimately powers machines, meaning the batteries drain more quickly. You see that in gadgets like phones, as well as in electric cars. But Cassie? Weirdly, no, not even in subzero temperatures.

“We thought the walking would be limited by the duration of the battery outdoors,” Grizzle says. “It turns out it doesn’t seem that that was the case.” Cassie managed a total of an hour and a half of operation out in the cold, with battery power to spare. Why it fared so well, Grizzle isn’t sure.

But the remote-controlled Cassie had other problems, which is perhaps not surprising given that it’s a research platform meant for the comfort of labs, not the ravages of polar vortices. Twenty minutes into the robot’s meanderings, something went haywire with the electronics.

“We couldn’t quite tell because the power shut down and the robot just fell to the ground,” says Grizzle. “So we took Cassie back into the lab and took some caps apart and reconnected the wires.” No fall for a robot worth hundreds of thousands of dollars is a good fall, but the weather only made matters worse here. “She cracked the protective cover on the battery because the plastic became brittle at this temperature, so it shattered almost like glass. So we kind of taped it back together.” Good as almost new, Cassie went back out and walked for another hour straight.

She was sounding a bit funny, though: Her actuators were squeaking. These electric motors are complicated, after all—precisely honed metal whirring at high speeds to propel the robot. But other than the noise, nothing with the locomotion was out of the ordinary. “Otherwise, she seemed fine,” Grizzle says.

Cassie’s cold-weather jaunt was a rare opportunity to push those legs to one kind of extreme. As robots like Cassie edge closer to walking among us, they have to learn to adapt to the real world—not just by withstanding plunging temperatures but by adapting themselves to walk on snow or ice.

“Walking in the snow, you know you have to take higher steps and more of a vertical up and down action,” Grizzle says. “Otherwise you end up dragging your foot through the snow, so you have to change the style of gait.”

Roboticists usually make these adjustments manually, coding a robot to walk a certain way in particular conditions. But the goal is to get Cassie and other bipeds to automatically detect when, say, they’ve transitioned from the wood slats of a boardwalk onto sand. And there’s no better way to get the machines ready than to subject them to punishing conditions. Last year, for example, Grizzle’s lab had Cassie traipse through flames. (Very Game of Thrones, by the way, all the fire and now ice.)

“We all want to use robots in conditions where people could be at risk,” Grizzle says. “If we can have Cassie walking in inclement weather, she could then, with her mapping system, help identify anyone caught out in the cold.”

Better Cassie than you or me, after all.