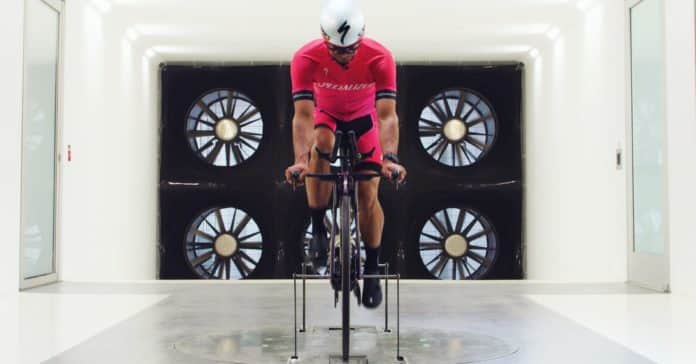 I straddle my bike, clip into my pedals, and take a slow, deep breath. What I’m about to do won’t take long, but it’s going to hurt and I know it. Really, it’s all I can think about.

My bike is attached to a stationary trainer that controls how hard I must pedal to turn the cranks. Controlling the trainer is Evelyn Stevens, an Olympic cyclist who, in 2016, set a world record in one of her sport’s most celebrated—and most masochistic—events: the hour record.

The hour is widely considered to be cycling’s purest record, albeit an unusual one: Instead of requiring them to traverse a set distance, this event allots cyclists a set time of 60 minutes to pedal as many laps as they can around a velodrome. And whereas other competitive pursuits typically pit multiple athletes against one another, the hour is a solo affair. The race, if you can call it that, is against the clock.

“The whole point is to push your body and your mind to a place they’ve never been before,” says Stevens, who recently visited WIRED’s offices in San Francisco to give me a taste of what it’s like to pedal one’s ever-living brains out. That’s what the bike and trainer are for: to see how long I can maintain the power output of a world-class hour-record cyclist.

Athletically speaking, I’m not a world-class anything—but I’m no slouch, either: I’ve been a runner all my life, raced triathlons in college, and have completed multiple marathons. Still, as I begin pedaling, I can’t help thinking how unprepared I am for the task at hand. Not just physically, but mentally.

Stevens spent years preparing her brain and body for a go at the hour record. She worked on cultivating mindfulness with a sports psychologist. She floated for hours inside sensory deprivation tanks, to practice untethering her thoughts from the passage of time. She trained without music, and, more importantly, without biometric feedback: The Union Cycliste Internationale, the governing body of the cycling world, mandates that hour-record athletes fly by feel, without knowledge of metrics like heart rate, speed, cadence, or power output. The point of Stevens’ mental training was to practice decoupling her attention from everything but the present moment. To focus her attention not on the pain, her thirst, or how long she had ridden, but individual pedal strokes. “My mantra was pull, pull, push. Pull, pull, push. Pull, pull, push,” she says.

Despite her preparation, Stevens’ hour attempt nearly broke her. During minutes 50 through 55, “I was physically in the most painful place I had ever been,” she says. She remembers sounds fading away, her vision going dark, and her thoughts turning to all the wrong things. “You want oxygen, you want water, your body is screaming: Stop, stop, stop.” Around the 55th minute, the idea of letting down her coach brought her back. “I just thought, oh gosh, he’d be so disappointed. His family, who sacrificed so much of their time with him so he could coach me, would be so disappointed!” The guilt returned her attention to her breath, to her mantra, to the state of mind she needed to traverse a then-unprecedented 47.98 km—29.81 miles—in 60 minutes flat.

A few minutes into my warmup, my shirt already sopping with sweat, it occurs to me: I don’t have a mantra. Though if I did, it would probably be something like “don’t hurt yourself.” Or rather, because the pain component of this little stunt is non-negotiable, “don’t vomit.”

To stand a shot at the hour record, an athlete must maintain for 60 minutes a power output that most people would struggle to hold for 60 seconds. Stevens averaged just over 300 watts for the duration of her attempt. British cyclist Bradley Wiggins, who, in 2015, pedaled 54.526 kilometers (33.881 miles) to set the current men’s record, is estimated to have averaged 440 watts. If you’ve ever paid attention to your numbers during spin class, those figures will no doubt astound you. If spinning’s not your thing, imagine this: 440 watts is the energy it takes a 150-pound person to climb a flight of stairs in about 5.5 seconds. Now imagine climbing 655 flights at that pace. That’s an hour.

To sustain that kind of power output for an hour takes more than just intense physical training. It also requires serious physiological gifts. Arguably the greatest gift of elite cyclists is an innately high capacity for pulling oxygen out of the air and delivering it to their tissues. Sport scientists call this measurement VO2 max, or maximal oxygen uptake, and express it in milliliters of oxygen per kilogram of body weight per minute. The average person has a VO2 max in the 30s or 40s. Stevens’ VO2 max? “Seventy-two, seventy-three,” says sport scientist Neal Henderson, who coached Stevens to her hour record. That number is astonishing. Most well-trained athletes score in the 50s or low 60s. “Women in the 70s is like men in the 80s,” Henderson says. “There’s a handful in the world.”

VO2 max plays such an important role in cycling performance that on rare occasions, a person with anomalously high maximal oxygen uptake will go decades without fully realizing their athletic potential, only to stumble upon it relatively late in life. Stevens was such a person. At 25, she was working full time on Wall Street when, on a visit to California in the fall of 2007, her older sister encouraged her to try cycling. She loved it. Less than a year later she raced Vermont’s Green Mountain women’s race as an amateur and finished four minutes faster than the professionals. In 2009 she quit her job in finance and went pro. Six months later she placed second in the US National Time Trial Championships. In 2010 she placed first. In 2011, she did it again. In 2012, she represented the US in the Olympics.

“I got to a point where I wanted something new, something different, something challenging,” she says. She found that something in the hour record.

To pursue the record in earnest, Stevens needed more than her freakish strength and preternatural aerobic abilities. She also needed a high-performance ride. She decided on a modified version of Specialized’s Shiv. Like many modern time-trial and triathlon bikes, the carbon-fiber frame’s bladelike shape is optimized to slice the air with as little resistance from the wind as possible. Her wheels, too, were designed to reduce drag, as was her helmet: a smooth bubble of foam and plastic with a menacing rearward taper reminiscent of the xenomorph from Alien.

Fitting Stevens to her bike involved long hours in Specialized’s bespoke, human-sized wind tunnel. In 2014, the UCI changed the rules for the hour by allowing riders to replace their traditional drop handlebars with drag-reducing “aero bars.” Cyclists could now lean far forward by resting their forearms atop their handlebars, minimizing the area exposed to wind resistance as they ride. But the aero position has its drawbacks. Leaning too far forward saps your power; incline too far back, and you’re fighting wind resistance. Finding a cyclist’s goldilocks posture is tough. Finding the pose they can actually stay in is even harder: The optimal aero position is usually too uncomfortable to maintain for an hour, and usually results in shorter distances than a less aggressive tuck that riders can hold for the full 60 minutes. The aero position, after all, is only aero when you’re in it.

Back in WIRED’s offices, with Stevens controlling my stationary trainer, I don’t have to worry about steering my bike, or pay attention to the position of my body. All I have to do is pedal. But when my warmup ends and Stevens begins increasing the wattage on the trainer in 50 watt increments, my mind quickly turns to the searing in my quads. At 250 watts she asks how it feels. “Hard,” I tell her between gasps. I’m trying to maintain my composure, but my body’s already in overdrive.

We graduate to 300 watts, roughly the power Stevens maintained for her hour record. I try to play it cool, sustain the effort. The original plan was to spend 30 seconds at each wattage, but I barely manage 15 before Stevens notices me struggling and intervenes. “This looks like kind of an uncomfortable level,” she says, smiling. An understatement. If we don’t ramp up now, I’ll never get to experience Wiggins’ 440 watts. She increases my resistance directly to 400 watts, then jumps right to 440. “So remember, he did this for 60 minutes,” she says. “What do you think, Robbie—can you do it for an hour?”

Afterwards I am utterly wiped, and my legs are sore for the next several days. I’m astonished to learn that cyclists will occasionally make two hour-record attempts more or less in sequence. Coincidentally, this is precisely what Vittoria Bussi does the day before Stevens visits WIRED’s offices: On her second attempt in as many days, the Italian cyclist set a new UCI women’s hour record, riding 48.007 kilometers (29.83 miles), beating Stevens’ best by 27 meters.

It’s anyone’s guess how long Bussi’s record will stand. Stevens held the title for two and a half years, but Henderson, her coach, thinks that, under current UCI rules, the right woman, astride the right bike, circling the ideal track on a very good day, could best Bussi’s performance by two whole kilometers, breaking the 50 kilometer barrier for women. Under similarly optimal conditions, he says, the right man might eke out 57.

Henderson bases those estimates on hard measurements: Rider weight. Power output. Wind resistance. The elevation of the track and the density of the air above it. “His approach is much more scientific than mine,” says Stevens, who retired from cycling shortly after her go at the hour. “I feel like nothing is impossible. It only becomes possible.”

A Giant Iceberg Grounded Itself Near a Greenland Town

GizmoCrazed - July 17, 2018 0
When an iceberg breaks off from a glacier, it can drift for thousands of miles, traveling freely across the open ocean. But last week,...

New glasses use mini-laser to project images directly onto retina