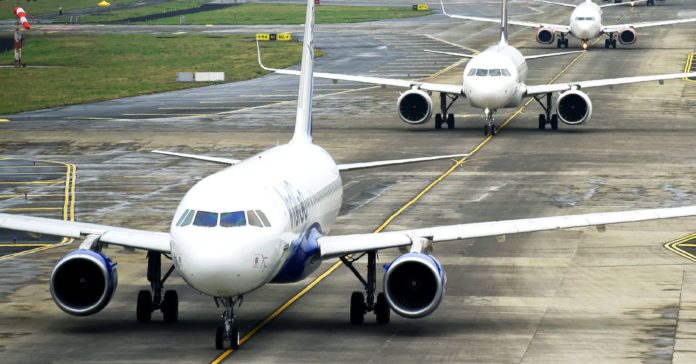 Friday morning began with delays at New York’s LaGuardia Airport. That’s not unusual—New York’s airports are famously balky. But this time, the cause wasn’t something prosaic, like a blizzard. It was staffing. Because of the federal government shutdown, the airport didn’t have enough Transportation Security Administration agents and air traffic controllers; things slowed to a ground stop.

Then it started to spread—Newark, Philadelphia, even the key hub of Atlanta all began to wind down. And that’s terrifying. Airports are nodes on a global network, and the science that guides how that network behaves means that if one node has a problem, that problem will spread. The international air travel network exists on something of a knife-edge. It doesn’t take much to knock it out of optimal flow.

Basically, the delay problem is one of “connected resources“; planes land and have to get turned around to perform other flights, and some of the passengers on them are getting onto other flights, too. If you’ve ever flown, you know all that, but what it means in practice is that small mistakes or delays at one airport get magnified as they move down the line, propagating and sometimes intensifying. “The systems operating these queues are very close to capacity,” says Hamsa Balakrishnan, an aerospace engineer at MIT who studies the air transport network. “Both LaGuardia and Newark had wind-related delays today. With full staffing you might have been able to manage, but with a decrease in staffing as well you have delays, which then end up spreading to other airports as well, because of connectivity.”

Typically you might expect that the biggest airports in the world—the ones with the most flights in and out, say, or that move the most people—would have the biggest effect on overall movement across the network. But in fact, an airport’s “delay propagation multiplier” varies depending on all kinds of things, from how an airport is scheduled to its overall capacity, and even the weather. By one calculation, a minute of delay causes an average of 30 seconds of slowdown elsewhere in the network. But some airports are more resilient than others. The time it takes to get from one to the other has an effect. It’s so complicated that it daunts even the most intrepid network modelers.

Airlines try to account for all this by building slack into the schedule. They calculate the amount of time a given flight should take—the “scheduled block time”—and the amount of time the plane should have to spend on the ground, the “scheduled turnaround time.” But then they have a choice. “They insert buffer time in their schedules and ground operations,” says Bo Zou, a transportation engineer at the University of Illinois. “They still encounter delays, and a newly formed delay for one flight will propagate to the second and third flights. Part of it will be absorbed by the buffer, but not all of it.” Build too small a buffer, and the delays propagate further. Build too large a buffer and you’re not using your fleet efficiently, and losing money. “One side is efficiency, the other is robustness,” Zou says.

And it changes all the time, depending on changing conditions—some are predictable, like winter storms, and some are not, like government shutdowns and informal sick-outs. That’s called a “dynamical complex network.” It has to adapt, constantly.

Because if it doesn’t? According to one study, flight delays cost the US economy over $30 billion a year. It’s not just lost time or flight expenses; it’s whatever the people on those flights were planning on doing when they arrived. “A prolonged shutdown, or even slow down, would likely affect all kinds of unforeseen things,” says Luís Bettancourt, a network scientist at the University of Chicago. “The reliability of time­-sensitive logistics will degrade, and the hub character of some of these cities will have to be bypassed, at least temporarily. A prolonged slow down would be most disastrous to large cities, their influence, and their economies.”

Having shut down the shutdown, the government can now get its TSA agents and air traffic controllers back on station. That’ll build some resilience back into the airports just in time for a big-ass snowstorm due to hit the midwest next week. But the overall health of the air travel network will still be precarious.

That’s why researchers are working on accumulating more and more data on how it all works (or doesn’t). If humans can’t schedule all these flights in an efficient and robust way, maybe an algorithm can. Balakrishnan has even cofounded a startup that’s trying to make it happen. “There are so many moving pieces that it’s hard for a human being to come up with all possible solutions,” she says. “But that’s something we know how to get computers to do.” If you enjoy flying on an intractable and incomprehensible network now, wait until it’s run by an intractable, incomprehensible robot.

The Universe Is Not a Simulation, but We Can Now Simulate...

GizmoCrazed - June 16, 2018 0
In the early 2000s, a small community of coder-cosmologists set out to simulate the 14-billion-year history of the universe on a supercomputer. They aimed...

Video: The driver of the autonomous Uber was distracted before fatal...

How Supercomputers Can Help Fix Our Wildfire Problem

The Weather Channel Flooded Charleston to Make You Care About Climate...