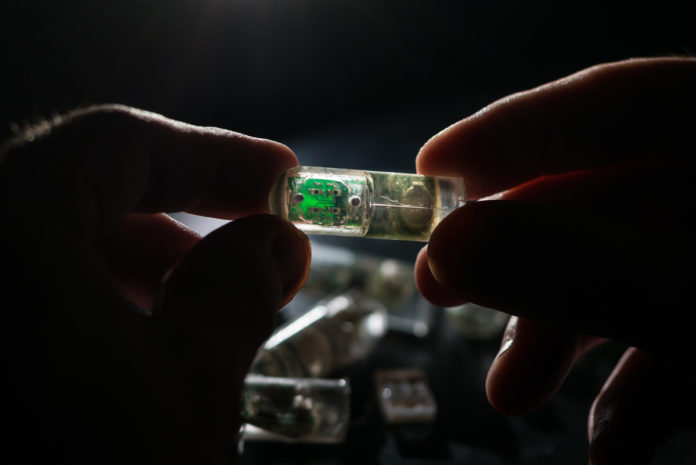 Treating the human gut has always been difficult ­— the tools used to measure its health are imprecise and usually highly invasive.

In a capsule endoscopy, for example, doctors take snapshots with ingestible cameras, but the devices don’t measure chemical composition, a more revealing barometer of gut health. Stool tests are limited in what they can detect, and surgical biopsies are disruptive.

Several teams are working on biosensor capsules that are swallowed. Unlike camera pills that merely take images, the capsules carry genetically engineered bacteria programmed to detect biological signals in the gut, such as inflammation. The data can be sent to smartphones or other devices to relay information in real time.

A paper published in May in Science described a biosensor capsule, nearly as long as one AAA battery, that successfully detected gastric bleeding in pigs. Lead author Mark Mimee, a postdoc at MIT, says he plans to shrink the capsule for an easier swallow. In addition, Mimee is developing sensors to measure a broad range of gut chemical signals to detect the presence of diseases such as cancer and liver disease. Human trials remain several years away.

Biosensors could also potentially be used to heal the gut by neutralizing toxins or balancing the microbiome, says the paper’s senior author Timothy Lu, a biological and electrical engineer at MIT.

Gastroenterologists know that gut gases tell a tale of intestinal health, but they also are hard to measure, and typically require invasive methods. In 2018, a team of researchers in Australia organized the first human trials of an ingestible sensor that measures gas production from inside the intestines. In one study, for example, published in September in Alimentary Pharmacology and Therapeutics, the capsule accurately measured hydrogen production in real time during food fermentation in the guts of 12 people. A larger human trial is planned.

Stephanie Hansel, a gastroenterologist at Mayo Clinic in Rochester, Minnesota, likes what she sees in the burgeoning field. She regularly treats people with Crohn’s, a debilitating disease that causes inflammation in the digestive tract. Testing for it involves both a capsule endoscopy and a colonoscopy, in which a camera on a flexible tube is passed through the rectum and into the intestine.

“If a less-invasive test could offer the same or better information, patients and [medical] providers would be thrilled,” says Hansel.

The Weather Channel Flooded Charleston to Make You Care About Climate...

GizmoCrazed - April 12, 2019 0
Not enough people care enough about climate change. It's too remote, too removed from everyday life. Even those who acknowledge its enormity often don’t...

Here's what real science says about the role of CO2 as...