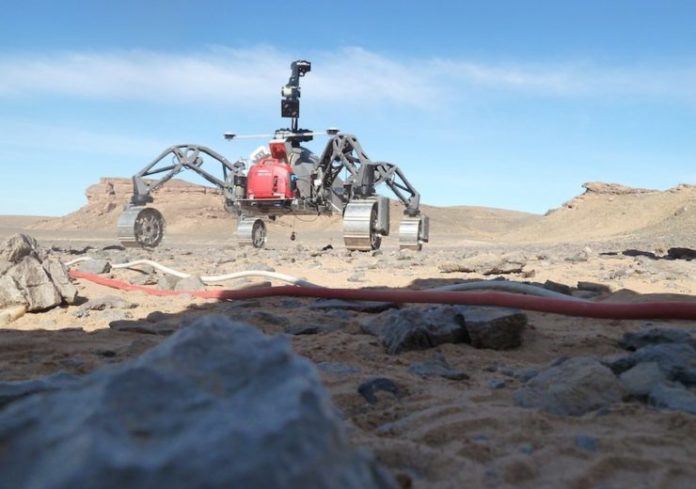 The Future of Martian Bots

Mars has been home to robots since the 1990s. Rolling over the rocky terrain, martian robots have endured dust storms, radiation and the hardships of life on the Red Planet. New software from the UK could allow these robots to drive themselves around the rocky martian terrain and enable them to explore farther than ever before.

It currently takes about eight minutes (each way) for commands and communication to travel to or from Mars, so robots guided by humans on Earth can only travel a little more than a hundred feet (or a few dozen meters) per day. But this new software aims to enable future rovers to decide where they go and how to get there on their own, without the need for direct commands from Earth. Essentially, this software would give a martian rover self-driving capabilities.

Cutting out the need for time-intensive commands to travel to and from Mars for every move, this advancement would free up martian robots to travel over half a mile (1 km) per day. By dramatically expanding the area that a rover covers every day, this software would also dramatically expand the amount of data the rover collects. This would greatly improve the research capabilities of future missions and it could even lead to more frequent scientific findings.

“Mars is a very difficult planet to land safely on, so it’s essential to maximize the discoveries from each successful touchdown,” said Catherine Mealing-Jones, Director of Growth at the UK Space Agency, in a statement. “New autonomous robot technology like this will help to further unlock Mars’ mysteries and I’m delighted that the UK is a key player in this cutting-edge field.”

In testing, the self-driving software was mounted on a rover known as “Sherpa,” provided by the German Robotics Innovation Center DFKI. Sherpa was allowed to roam around the Ibn Battuta Test Centre, located in Morocco. It’s a popular site for testing martian rovers, as the local terrain is similar to the red and rocky surface of Mars.

The system is made up of a number of different technologies. In testing, researchers monitored the software’s autonomy framework, which enables a craft to make decisions without human input; data fusion which gathers data from different sources to create information like maps; “plug and play” sensors which allow the rover to see and understand the martian world around it; and an operating system that enables the rover to maintain basic functionality.

In addition to enabling the rover to traverse the martian landscape without human intervention, this software could also improve scientific capabilities. For example, using an autonomy framework, a rover could identify and then investigate points of interest that a human may have missed. So, where human attention and exploration fall short, this software could pick up the pieces.