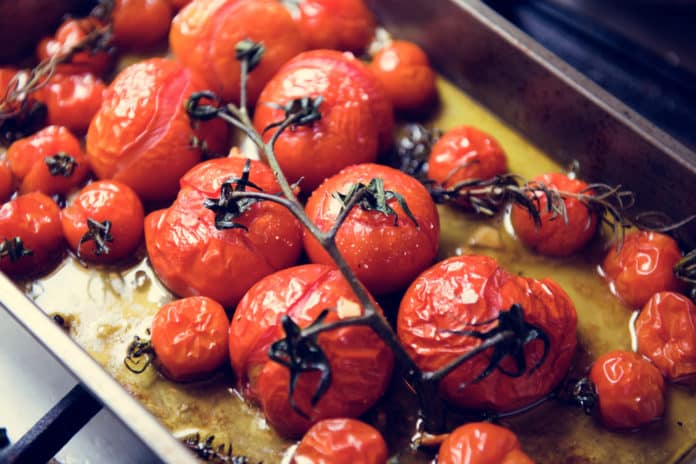 The current hottest tomato in the world is, of course, none of them, because tomatoes don’t make capsaicin, the chemical compound that gives hot peppers their kick. But, a group of researchers say that the bland red fruits (yes, they are technically fruits) could conceivably be genetically engineered to begin pumping out the scorching compound, due to tomatoes’ close evolutionary relationship with peppers.

The two diverged around 19 million years ago, not that long, evolutionarily speaking, and the recent sequencing of the tomato genome revealed that they actually still possess the genetic framework to produce capsaicin. The relevant genes aren’t normally active, but with new genetic engineering techniques, researchers from Brazil and Ireland say that tomatoes could be tweaked to make the spicy compound once again.

Ah, the possibilities. Bruschetta with a kick. Pasta sauce that tingles. Fiery pizzas and eye-watering salads. The culinary potential of a hot tomato tempts the palate.

But, say the researchers in a paper published in Trends in Plant Science, the real reason for convincing tomatoes to get their fire on are more economical. Tomatoes are something of a workhorse crop. They grow bountifully and easily, and there’s a commercial and technical infrastructure surrounding them that makes tomatoes a safe option for agriculture. Peppers, on the other hand, are a bit more finicky. They don’t grow as readily, are more easily beset by pests and diseases and their capsaicin yields are highly dependent on the environment — that is to say, they lack the reliability that large-scale agriculture requires. Pepper yields average about three tons per hectare; tomatoes can crack 100 tons per hectare.

And capsaicin is in demand for more than just livening up bland dishes. It’s used in pepper spray and as a topical painkiller, and the varied commercial uses mean that a more dependable means of acquiring capsaicin would be advantageous. There’s no efficient way of mass-producing capsaicin in a chemical plant, so natural factories like peppers, and perhaps tomatoes, are the best option.

The researchers outline two methods by which this genetic manipulation could take place. Genes from a kind of bacteria that infects plants and has the ability to regulate their gene expression could be tweaked and inserted into a viral vector to reactivate the capsaicin pathway in tomatoes, or more conventional genetic engineering like the gene-editing tool CRISPR could be used to accomplish the same thing. There are still questions to be explored as to the efficacy of both techniques, but the researchers say they are fairly confident that any technical wrinkles could be smoothed over with further testing.

Tomatoes could be potentially altered in a few other ways to produce useful compounds, the researchers note as an aside. Lycopene, a compound found in tomatoes, could be reformulated during a tomato’s development with the addition of a few extra genes from other species. These subtle genetic reprogrammings could produce both bixin, a common color additive in both food and cosmetics, and beta carotene, an antioxidant.

Whether or not these genetic additions would affect tomato yield or quality is still unknown as well. The authors say in a statement that they are currently working on gradually deciphering how various genetic changes to tomatoes affect their ability to make capsaicin, with the goal of discovering the complete pathway. That would make hot tomatoes a real scientific possibility.

All that would be left to discuss is whether we want them or not.