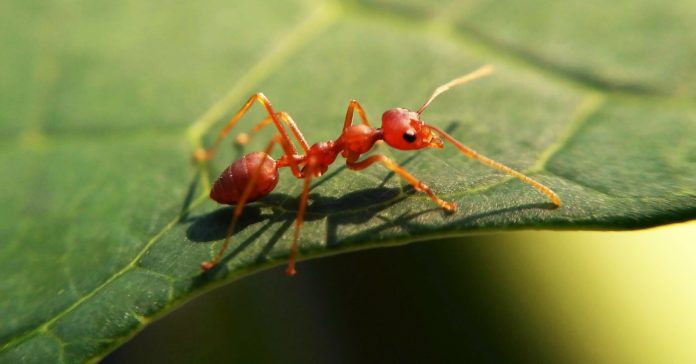 The red imported fire ant is one of the world’s most invasive species. Its sting delivers a burning poison that kills living tissue. Together groups of ants devour deer fawns, baby birds, reptiles, and almost any other source of protein they can get their mandibles on. They form acres of crisscrossing tunnels with thousands of cooperative workers. And their territory has steadily been spreading.

The fire ant’s story is in some ways the opposite of what the insect world as a whole is experiencing. Measuring bug populations is an imperfect science—they’re small, mobile, and hidden. But they are undoubtedly shrinking, due to habitat destruction, climate change, and other human-driven trends. A German study found a 75 percent decline in insect biomass between 1989 and 2017. Another German study found that the butterfly population decreased from 117 species in 1840 to 71 species in 2013. And a 2014 Science review found that of the invertebrate species that are actively being monitored, the majority have decreased by almost half.

But for the fire ant, this mass die-off is a blessing. They are experts at filling in the ecological gaps where other organisms have disappeared. That can mean colonizing areas where other insects have slowly died away, or blossoming in the aftermath of a big disaster, like a flood, or expanding their turf after a smaller upset, like a lot of typical human landscaping. “Humans are a fire ant’s best friend,” says Walter Tschinkel, a biology professor at Florida State University and author of The Fire Ants. “In the south, if you have a lawn, you have created a lovely habitat for fire ants.”

Fans of warm temperatures, the ants build their homes around sprinklers and irrigation channels that allow them to set up outposts in dry climates. With human-driven climate change not only heating up the world but exacerbating hurricanes and wildfires, fire ants are primed to reap their rewards. They are steadily expanding their territory northward and, in the US, westward.

“Fire ants are a symptom of a global problem,” says Craig Allen, leader of the US Geological Survey in Nebraska. He refers to it as “biotic homogenization.” It’s a term for what happens when an invasive species outperforms locals and takes over their resources. In the long run, the outcome is less genetic diversity, and fewer evolutionary strategies for species to succeed. Which leads, over time, to weaker ecosystems and more extinctions.

The red imported fire ant evolved on the floodplains of central South America, but people have hauled the ants all over the world on wooden shipping pallets. Once they arrived in the US—in Alabama, sometime in the 1930s or early ’40s–they developed another superpower. Prior to their spread in the US, they were known to organize in colonies with a single queen. If another mound arose in their vicinity, they attacked these rival ants. As a result, colonies were spaced relatively far apart, with about 40 mounds per acre. But sometime around 1973, something shifted.

A group of USDA scientists came across an area near Gulfport, Mississippi with an unusual number of fire ant mounds in close vicinity, with many more fertile queens than the usual single mama ant. Over time, scientists began to realized the significance of these findings, that the red imported fire ant was fundamentally different from other ants. Though some ant species have multiple queens per colony and others have just one, no other species uses both reproductive strategies. Fire ant colonies with multiple queens are denser—400 to 500 mounds an acre, instead of 40—and take more of a toll on the species around them. They’re also much harder to kill with an insecticide, since the poison has to lop off the heads of several queens instead of just one.

Fire ants are perhaps most notorious for forming floating balls of horror that can coast through hurricanes. After Hurricane Harvey, the ants formed rafts of workers that link together using hooks on their limbs. If flood victims accidentally run into these mobile colonies, the ants attack, turning a dangerous situation into a potentially deadly one. One person wrote on Twitter that he “Had a golf ball size group wash up on my foot during flooding near Austin.”

An estimated 14 million people are stung every year, with some of those incidents leading to hospitalizations. About half of people are at least somewhat allergic to fire ant stings, and roughly one percent of people are at risk of having a dangerous full-body reaction. The cost of a world where Solenopsis invicta thrives doesn’t end with the medical bills. They cause at least $6.7 billion in annual damages to not only people but houses, electrical and telephone lines, and agriculture.

That figure only captures the costs we can easily estimate. The ants are also adept at taking down baby birds and reptiles, including quail, alligators, lizards, and turtles—in particular, the threatened gopher tortoise, which digs burrows that more than 360 other species use for shelter. Once one of these baby animals pokes a hole in its shell to begin hatching, the ants can swarm inside their shells.

As this ant continues its plunder, the outlook for these other species (and our own ability to walk fearlessly across a lawn) is bleak. But some species seem to be defying the odds and evolving fire-ant resistance. The fence lizard, common in the Eastern US, is known to freeze in response to a threat. That’s terrible if your enemy is the fire ant, which can swarm, bite, and ultimately kill such a target. In areas where fire ants thrive, however, fence lizards appeared to have learned to bolt instead, according to a recent study in the journal Global Change Biology.

Yet fire ants continue to conquer new territory, confounding scientists’ estimates of their likely spread time and again. “If you look back over time, it’s a lesson in humility,” says Allen. With warming temperatures, nothing’s stopping the red imported fire ant any time soon.

GizmoCrazed - January 10, 2012 1
iPad 3 rumors have been on the top of the rumor mill these days with rumours of leaked iPad 3 parts circulating all over the...

This Is How Uranium Emit Radiation