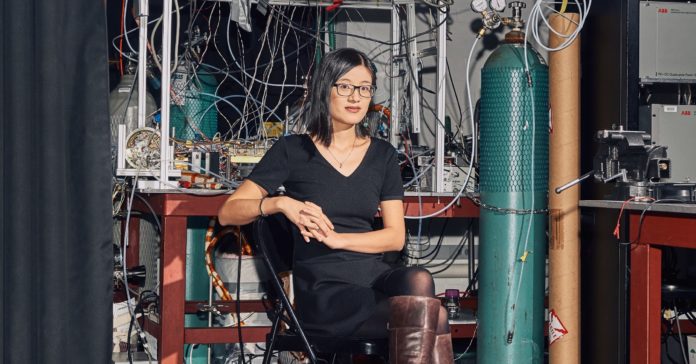 To help cure the planet’s ailments, Zhen Dai suggests antacid. In powdered form, calcium carbonate—often used to relieve upset stomachs—can reflect light; by peppering the sky with the shiny white particles, the Harvard researcher thinks it might be possible to block just enough sunlight to achieve some temperature control here on Earth. Dai’s work calls for a custom-­designed test balloon that, pending an independent committee’s green light, is set to release up to a kilogram of calcium carbonate 12 miles above the US, in what will be the first solar geoengineering experiment in the lower atmosphere. Small onboard propellers will stir the payload into the air.

Optical bench with the gas flow setup and control system.

Though this one’s highly localized, expansive sun-dimming schemes carry risks. Crops may shrivel, and developing countries might disproportionately suffer the side effects. Dai has spent her career thinking about the environment—she has helped purify water in Haiti and once designed a machine to scoop up oil after spills. Global warming, she asserts, requires the pursuit of every available option. “Solar geoengineering could give us some flexibility. It’s not so different from anything else we’ve done in the world,” she says, suggesting that ancient irrigation was environmental modification too.

Preparation, she emphasizes, is key: The sky can’t be sprinkled with just anything. Heavy metals are too toxic; chlorine could deplete the ozone. Solar geoengineers often propose aerosols containing sulfur, the acrid substance that cools the planet following massive volcanic eruptions. Dai says that calcium carbonate, the primary ingredient in snail shells and limestone, could cause less harm—and even reverse some of the damage done to the atmosphere.

As for where to launch the powder, Dai and her colleagues have run dozens of altitudes and latitudes through computer simulations. Higher altitudes—as many as 15 miles up, where there aren’t any clouds—require fewer chemicals to produce the same effect. But there’s a trade-off: The more elevated the dust, the more difficult it is to contain. And virtual models can’t account for everything, so Dai spent three years doing real-life tests, injecting gases like hydrogen chloride and chlorine nitrate into a quartz chamber called a flow tube, hundreds of times over, to see how the ozone might react to her faux flurry.

Dai insists that her particular method of geoengineering is a Band-Aid; it should not distract from the development of more sustainable fixes to climate change. Still, she’s committed to troubleshooting the backup plan, should the need for chemical sun blockers ever arise. Her version, if you like, of throwing shade.

GizmoCrazed - February 21, 2019 0
For security reasons, I can’t tell you exactly where Clay Bolt rediscovered Wallace’s giant bee. But I can tell you this. With a wingspan...