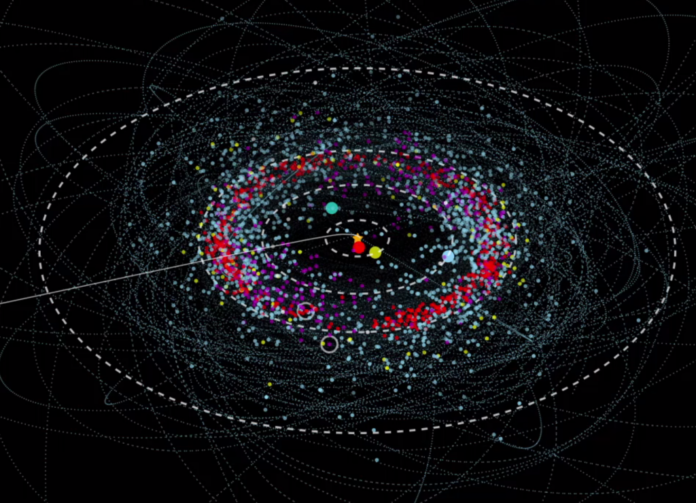 Snapshot of the solar system, highlighting the various populations in the Kuiper Belt (colors). That whole outer zone is unexplored…but not for long. (Credit: Wes Fraser, National Research Council of Canada)

Novelists have “It was a dark and stormy night.” For planetary scientists, the equivalent cliche is, “We expect to be surprised.” The story of every new space mission seems to begin that way. No matter how intensely researchers study some solar-system object, no matter how they muster the best resources available on Earth, they are inevitably caught off-guard when they get to study it up close for the first time. And no matter how worn and familiar that cliche may sound, it also rings true every time. Nature’s creativity surpasses human imagination, time after time.

Even by those standards, the flight of the New Horizons probe past Ultima Thule tonight is something special. In the words of Alan Stern, the mission’s principle investigator and spiritual leader, “We’ve never, in the history of spaceflight, gone to a target we know less about.” It’s a type of object never seen up close before, a small (30 kilometers wide) member of the Kuiper Belt. Even more exciting, it belongs to the so-called “cold classical” region of the Kuiper Belt, meaning that it probably has remained largely unchanged for more than 4 billion years, frozen in deep storage 6.5 billion kilometers from the Sun.

Will it look battered from ancient collisions? Will it be covered with organic molecules from the early solar system? Will it resemble Pluto’s moons, or look like a fresh comet, or like something else entirely? Nobody knows.

There are only a handful of previous moments in space exploration that had comparable feelings of plunging into the unknown. One is the Galileo probe’s encounter with Gaspra in 1991, the first time a spacecraft visited an asteroid. Until then, asteroids had been mere dots of light in even the grandest telescopes; the very term “asteroid” refers to their featureless, star-like appearance. Astronomers had many inferences about what asteroids must look like up close, but all of our mental pictures were colored by science fiction and fantasy art. 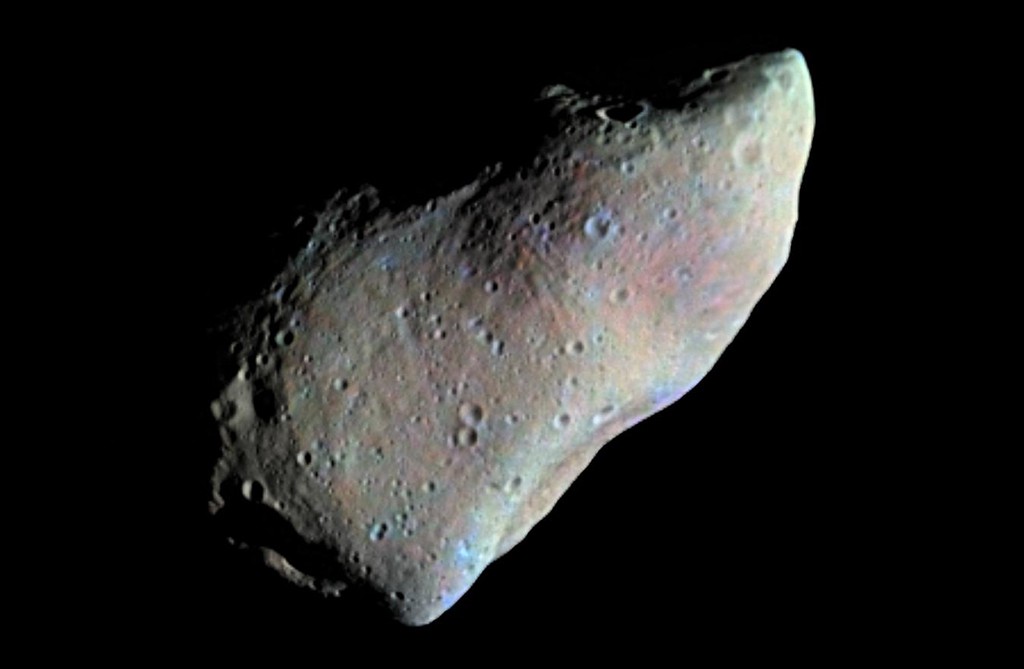 Then science intruded. I remember seeing the first images of Gaspra and laughing. The rough expectation was that it would look like a battered potato. It looked more like a shark, pointy and oddly smooth, blanketed with dust for reasons that are still not fully understood. Now we have seen 12 other asteroids (13 if you count Ceres as an asteroid rather than as a dwarf planet). OSIRIS-REx is currently exploring Bennu while Hayabusa2 is examining Ryugu. These two little top-shaped asteroid are nothing at all like Gaspra. Asteroids turn out to be diverse, complex, fascinating — surprising.

The Gaspra flyby came 5 years after another journey into the unknown, when an international fleet set off to visit Halley’s Comet in 1986, during one of its legendary once-in-a-lifetime passes through the inner solar system. The Soviets, Japanese, and Europeans all zeroed in on Halley to get the first-ever close look at the nucleus of a comet. (Cash-strapped NASA sadly did not participate in this historic moment.) 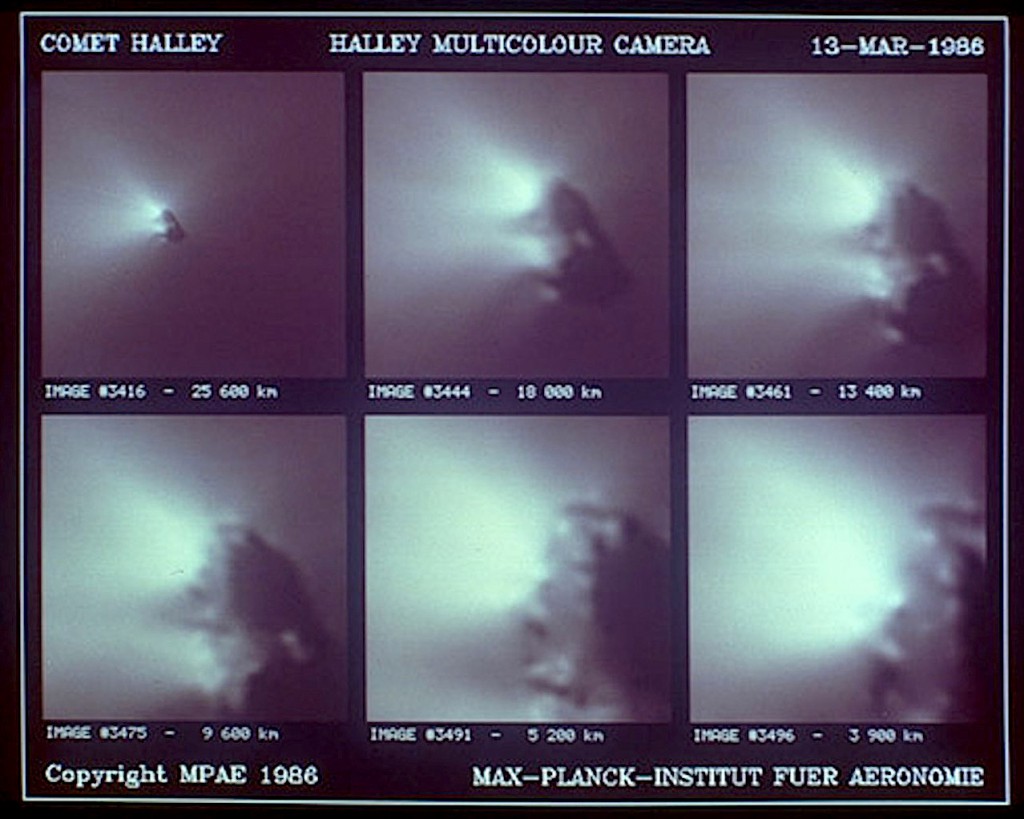 Just before encounter, the European Space Agency’s Giotto probe was struck by a piece of dust weighing about one gram — large enough to knock the spacecraft off-kilter and nearly end the mission. Flight controllers regained contact with the probe just in time and guided it to within 600 kilometers of the cold heart of Halley’s Comet. Rather than being a “dirty snowball,” as astronomers expected, Giotto revealed it to be more of an icy dirtball, dominated by non-ice components. And as the startling images showed, Halley’s spectacular tail begins as a series of irregular patchy geysers, with an explosive beauty all their own.

Earlier still, the twin Voyager probes began the greatest string of first-looks in all of space history. Before Voyagers 1 and 2, the moons of Jupiter and Saturn were little known, and the moons of Uranus and Neptune were completely terra incognita. Then came the scientific surprises: the volcanoes of Io, the methane fog of Titan, the bizarre cliffs and patchwork terrain of Uranus’s Miranda, the nitrogen geysers of Neptune’s Triton.

Like every good reconnaissance mission, Voyager inspired whole volumes of new questions. Prime among them, What was going on beneath the thick orange haze on Titan? It remained a mystery until 2005, when the European Space Agency’s Huygens probe (send in conjunction with NASA’s Cassini mission to Saturn) landed on the surface to take a look. It was the first view from the surface of a moon other than our own, the first landing on an object in the outer solar system.

I was reporting from Garching, Germany, when the first images and data came in from Huygens. Aerial views taken by the probe on the way down showed a landscape of branching riverbeds and dark features that resembled shorelines. The images were bafflingly familiar. It looked remarkably like New Jersey seen from the air. Then came the views from the surface, where Huygens touched down on a squishy surface littered with rounded rocks under an orange sky. 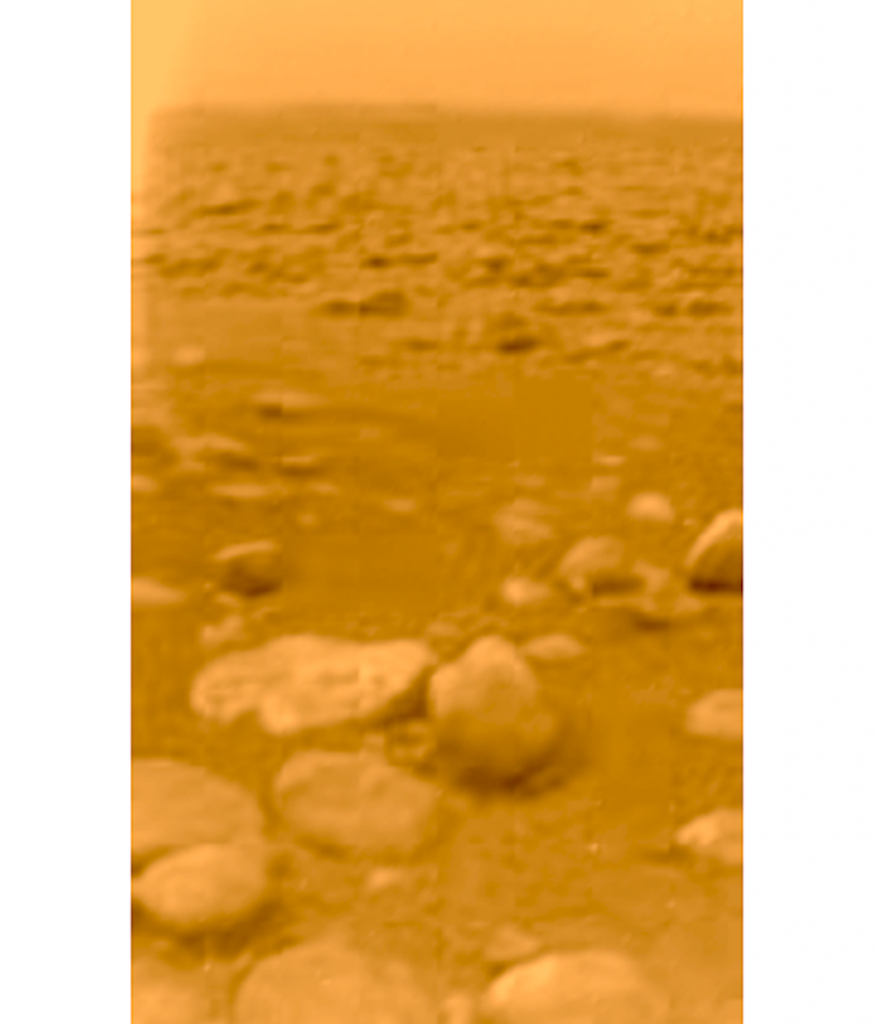 First view from the surface of Titan, returned by the Huygens lander on January 14, 2005. (Credit: ESA/NASA)

Nothing on Titan is as it seems, however. The rocks on the surface are made of water ice. The hazy clouds of petrochemical smog, a miasma of hydrocarbons. The river beds really were riverbeds, but the liquid that flowed in them was cold methane and ethane, which falls as rain and collects in lakes near Titan’s poles. At every step, Nature manages to confound, delight, challenge, and surprise even the more prepared researchers.

Now it is Ultima Thule’s turn. Right now we know almost nothing of its composition, its shape, even its orientation and rotation period. All we know is that a few dozen common elements, left to their own devices for billions of years, manipulated by the inexorable influences of gravity and radiation, have surely cooked up a landscape unlike any humans have seen before. Scientists await the results from New Horizons with the anticipation that comes not from ignorance, but from incomplete enlightenment. It’s an important distinction, one that Michele Bannister of Queen’s University Belfast makes deftly. 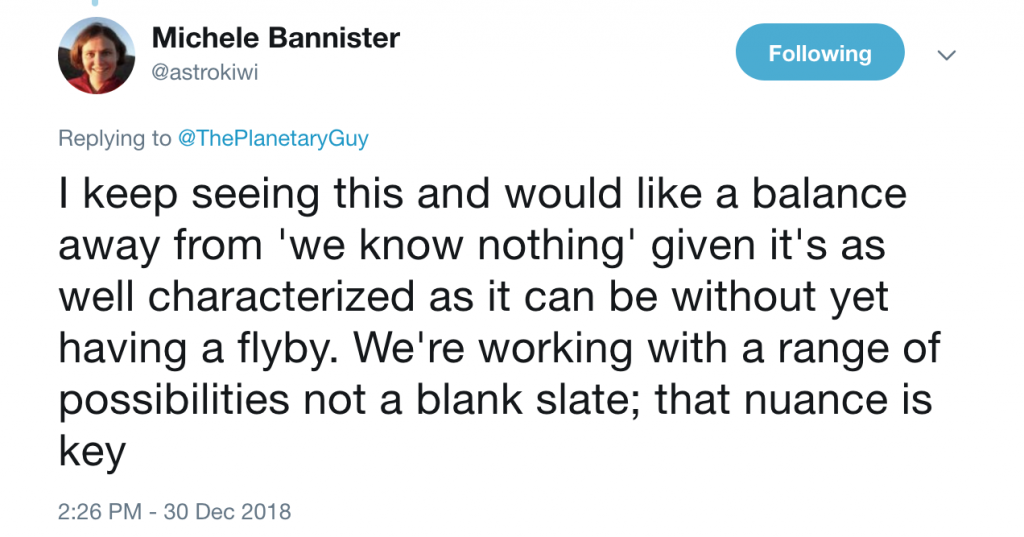 We are venturing into the unknown in the best possible way: Our minds primed with knowledge yet open to new wonders, every surprise treated as an invitation to grasp a bit more about our place in the vast order of the cosmos.