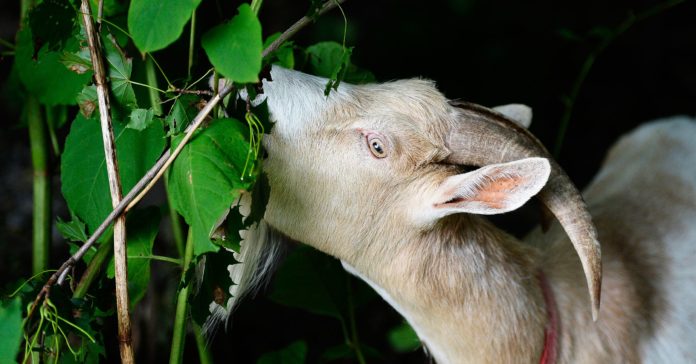 Nestled in the foothills of California’s Sierra Nevada Mountains is the quaint Gold Rush town of Nevada City. Surrounded by unkempt brush, the old, highly flammable city is in danger: With California’s wildfires raging with unprecedented ferocity in recent years, one spark could doom Nevada City to the same fate that neighboring Paradise met in November.

But not if the goats get there first. Realizing its predicament, Nevada City has launched a crowdfunding campaign to pay goats (or, more accurately, their herders) to clear brush at the edges of town. It’s called, yes, Goat Fund Me. And it’s part of an ungulate awakening: All across the state, business is booming for herders as panicked homeowners and towns reckon with the wildfire menace.

There is no single explanation for why California’s wildfire problem has gotten so bad. Climate change is one—less rain in the fall means dryer brush, which in turn coincides with seasonal winds that fan massive blazes. More cities encroaching on wildlands is another.

Yet a third factor—the one most pertinent to the interests of goats—is the fact that California has been really, really bad about clearing the brush that turns into tinder. For comparison, the southeastern US, an area only five times bigger than California, did prescribed burns on 5.5 million acres last year, 100 times more than the Golden State. Prescribed burns are expensive, and a huge chunk of California’s fire money goes to battling ever-larger blazes.

Goats, though? A herd’s work is relatively cheap, around $1,000 an acre (200 goats can tear through an acre a day). “I realized money was an issue,” says Nevada City vice mayor Reinette Senum, who launched Goat Fund Me. “We can go out and pursue grants but that takes months, and we don’t have months.” The best time for the goats to do their thing is in the winter, before new growth blooms during the rains of spring. That and the ranchers already have their goats rented out for the rest of the year.

The first step is to identify the most prone areas with the help of the fire chief, then reach out to residents there to tell them that there might soon be a special scent in the air. “You’ve got to let neighbors know: For a couple days you might get a smell,” Senum says. “Your dogs might be disturbed because they’re smelling goats and may want to go after them.”

To be clear, the goats don’t work alone. They have human handlers and their own muscle in the form of a big white dog. “They’re fiercely protective,” says Brad Fowler, owner of vegetation management company The Goat Works, which is working with the city. “In California we’ve got mountain lions and coyotes and, recently, wolves. The dogs, just by their presence and their bark, discourage predators to go somewhere else.”

The operation doesn’t simply amount to letting goats loose on a property. “Basically we have a mobile ranch,” Fowler says. “We’re taking a ranch, essentially with all the infrastructure that’s included in that, to every place we go.” The team sets up solar-powered electric fences to keep the goats penned in a particular area. If possible, they hunt down local creeks or ponds, but they may also truck in their own water.

But for the most part, once they’re in place, the goats are self-starters. They’re highly efficient vegetation managers, since they convert a plant’s solar energy into protein and poop, which nourishes the ecosystem, whereas human crews have to cart off what they clear. They’ll eat most plants from the shoulder up, so dead grasses and such. (If you want to really clear grass, sheep are your best bet.) Nevada City has a particular problem with out-of-control blackberry bushes, whose thorns are no problem for the goats. “They’ve got really nimble lips,” says Fowler. “It’s funny to watch them. They’ll hold the branch with their lips and reach in and bite it off with their back teeth.”

Being goats, though, they don’t necessarily abide by human notions of containment. “A bad day would be, you get a call that all your animals are two miles away from where they’re supposed to be,” says Fowler. “The good news is when that happens, people don’t get as upset about it as they would if, say, your bulldozer got loose and ran over a bunch of houses. As long as they stay out of traffic, I’m OK.”

On their own, goats only do part of the job; they’re more of an advance party. They get in there and strip out the brush enough for human crews to come in with chainsaws to cart away the bigger branches and such. Of particular convenience is the fact that goats will happily eat poison oak. “They’re cute little things, but it’s only one little piece,” says Senum. “Who doesn’t love a goat?

Still, the firefighting ruminant business is booming in California, beyond Nevada City. “It seems like everybody kind of woke up with these big fires,” says Fowler. “And I tell you what, there’s a huge opportunity. If somebody wants to get into the business, now would be a good time.”