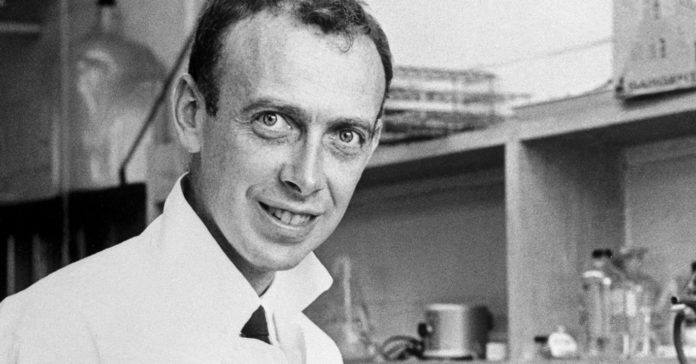 Scientific pedigrees are like any genealogical tree: when shaken, they can reveal family secrets. Most often, academic connections are divulged informally; potential employers want to know who you published with and who they can call to get a personal reference. But sometimes they reveal much more.

My career began as a research assistant in the laboratory of Susan Gottesman at the National Cancer Institute in Bethesda, MD. A pioneering microbiologist, Gottesman is best known for her foundational work in bacterial gene regulation. Early in her own career, however, Gottesman was an undergraduate research assistant in the lab of James Watson, the famed co-discoverer of the double-helix structure of DNA. In effect—through his direct connection to Gottesman and because Watson’s work helped establish my fields of study—James Watson can be considered my academic ancestor.

While Watson has always been a curious character, it wasn’t until 2007 that his personality caught up to his mythology. That year he made comments about, among other things, the dim prospects for the continent of Africa and its descendants, a fate he attributed to inferior intelligence. Shortly afterwards, he issued an apology, telling the Associated Press, “There is no scientific basis for such a belief.” But earlier this month, he doubled down on this sentiment during the PBS documentary American Masters: Decoding Watson. His comments led Cold Spring Harbor Laboratory, the renowned research institution that Watson has been long associated with, to strip him of his honorarys and titles.

That one person separates me, an African-American computational biologist, from James Watson—Nobel Laureate and mouthpiece of racist opinions—presents a quandary. For years, I have reveled in the powers of DNA, yet one of the people most associated with its discovery has made abhorrent comments about my race. The dilemma raises several questions: How does it feel to be a black scientist who owes much to James Watson in general, and in my case, is linked to his specific pedigree? Is it much ado about nothing, or might the black scientist occupy a special place in modern conversations about scientific racism?

Ironically, I was introduced to the scientific legacy of James Watson by my mother, an African-American woman raised in west Baltimore in the 1940s and 50s, the granddaughter of a woman born in North Carolina near the time of emancipation. That my mother would have been a scientist under different circumstances is a good guess, and I inherited her love of mathematics and adoration for scientists. Her copy of Watson’s The Double Helix shared the same bookshelf with the works of James Baldwin and Toni Morrison. She spoke glowingly of the DNA structure discovery and emphasized that teamwork and perseverance can solve some of the world’s biggest problems. I mostly listened. I applied that belief to my graduate work in evolutionary biology, a field that was transformed by genomics (an outcome that Watson predicted with impressive prescience).

James Watson is a DNA enthusiast. Not only is this stance understandable, it isn’t controversial, and many people who are not scientific racists are also DNA enthusiasts. (I might even be described as such.) The question of whether the biological basis of complex life is about genes or the environment is partly an empirical one. And (spoiler alert) thus far we know that genes can authoritatively craft the raw material of many morphological, behavioral, and disease-associated traits. Other explanations for the basis of life are at least as eminent, and not necessarily in conflict with the centrality of DNA—history, contexts, and environments turn the knobs on how genes are built, how they do their job, and how traits manifest in a dynamic world.

These are fascinating and important questions that James Watson might be interested in. The problem is that his controversial claims about black people do not grapple with those questions. Watson is not in the news for being interested in the genes associated with educational attainment. He is not radioactive for suggesting that the color you paint your toddler’s bedroom won’t make them more creative adults. Watson was stripped of his titles not for talking about group differences, but because his comments displayed a reckless misuse of science.

The furor over Watson has spawned a reactionary backlash. His critics have raised rhetorical questions of whether what James Watson says actually matters to anyone. Others have suggested that he’s been treated unfairly, hinting that the fuss is just virtue signaling, the illiberal left at it again. But they all miss the mark.

Yes, the racist comments hurt people. Yes, they affect the way many of us see ourselves and interact with our peers. And yes, this even applies to those of us who have been called “exceptional,” usually because we’ve existed in professions with few other black bodies.

Black exceptionalism is a popular and complicated idea. It asserts that a monolithic “average” black identity exists, and that by transcending this average, one is exceptional. While the idea isn’t welded to black achievement, it is related. Successful members of the black community who somehow avoided the regression to the (black) mean are presented as paragons, exceptional ones of their kind. There are backhanded compliments, and then there is black exceptionalism—a racist idea lightly dressed in a pat-on-the-back.

Some of us, in a naïve or perfunctory manner, wear black exceptionalism as a badge of honor, even under the guise of progress: “I will show them what we are capable of.” Good intentions be damned, because to adopt this stance is to walk directly into a pernicious trap. The most effective racist ideas rarely deny the existence of exceptional members of the outgroup to which undesirable features are attributed.

On the contrary, the most destructive ideas embrace high-performing members for statistical cover. In order to argue that the mean performance of an outgroup is lower for a desirable trait, there should be some high performers. High-performing black people are essential for racism like James Watson’s, and even he might predict a statistical and genetic exceptional negro, because they can’t all be incompetent.

The problem with this argument isn’t only that it avoids critical discussions about the possible sources of group differences, but also that it uses the notion of the exceptional individual to justify racist ideas towards others in the outgroup. In general, armchair appeals to statistics often conceal negative feelings that people already have that have been forged in the fires of fear and bias, not in science.

In the end, the privilege of working in areas where one’s genetic ancestors were historically unwelcome is the product of centuries of sacrifices that built a stage for our genes to act on. Many of us have observed analogous examples within our own lives: friends who were smarter than we are but went to the wrong school or were derailed by family trauma. Neighbors who put their love of algebra aside, opting to focus on the sprinter speed that they felt more valued for. Bright young women openly discouraged from pursuing higher education. This isn’t hyperbolic, storytelling fluff. These are actual lives. And they define the environments in which our genes, whatever their composition, are expressed.

In reflecting on scientific racism this way, being black and an academic descendent of James Watson leads me to a new, radical conclusion. Black scientists are in the best position to understand what is so broken about the ideas of Watson and his army. We exist because our environments gave us, and not our ancestors, the opportunity to flourish. And while history has provided enough data to support this point, we can punctuate it with a poignant thought experiment.

Imagine an alternate reality in which James Watson was identical except for possessing physical traits associated with being phenotypically black. In this world, Watson—with equal talent, but raised black, in Chicago, in the 1930s—would have almost certainly read about Linus Pauling or Rosalind Franklin’s eventual discovery of the double helix structure of DNA, and dreamed of a world that gave him the chance to do the same.

GizmoCrazed - April 12, 2019 0
If you’re lucky enough to get to travel abroad, you know it’s getting easier and easier to use our phones and other gadgets to...

Which public US universities graduate the most funded founders?

This Is the World’s Toughest Job With No Salary, Benefits or...