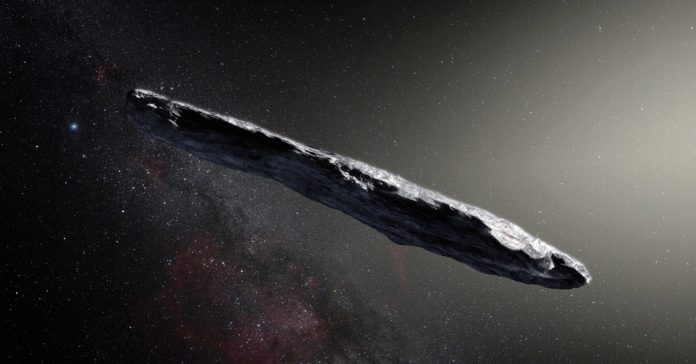 When you wish upon a star (or an asteroid or a comet) you are wishing on plasma, ice, dust, rock, on an object that exists, for real, so far away and moving so fast that no living human will likely ever have direct contact with it. (Well, generally.) But you’re also wishing on a metaphor.

Is it possible that ‘Oumuamua, the nominally cigar-shaped, somewhat mysterious visitor that a Hawaiian telescope spotted leaving our solar system in 2017, might be neither comet nor asteroid but an alien spacecraft? Not a rock whirling through the uncaring void but the fossilized wreck of a magnificent, light-powered starship?

Its slingshotting trajectory around the sun tells astronomers that ‘Oumuamua is not from around here. Comets tend to come from the Oort Cloud, distant but still orbiting the sun, and asteroids mostly come from a belt between Mars and Jupiter. ‘Oumuamua couldn’t have come from either place; it’s the first interstellar object humans have seen so close to home. Its behavior and composition may have lessons to teach about the formation of planets and how things travel among them. Whatever ‘Oumuamua really is, even if it’s not aliens, is pretty amazing. So why do people hope it’s aliens too? That’s the metaphor part—that in addition to being a scientific marvel, ‘Oumuamua might be a harbinger of a grander, numinous universe.

Before it showed up, scientists thought interstellar objects were vanishingly rare. As the great philosopher Douglas Adams once wrote, you just won’t believe how vastly hugely mindbogglingly big space is. Even if we humans Are Not Alone, that bigness makes running into someone else out there (as Adams might also say) highly improbable. But the fact that ‘Oumuamua crashed our ecliptic party suggests that interstellar objects are pretty common, on the order of stopping by once every 30 years or so. That’s wild. Measurements of ‘Oumuamua’s brightness and reflectivity suggest an elongated shape like a cigar, which some researchers think is the result of getting knocked out of some other solar system while stretched by the gravity of a Jupiter-like gas giant.

The questions about ‘Oumuamua, though, are even more exciting. If it is an asteroid, why is it in a weird, comet-like orbit? If it’s a comet, why doesn’t it have a tail—why isn’t it outgassing like comets do? Why is a cigar-shaped unidentified object accelerating in a way that doesn’t seem quite natural? That’s the kind of question that sends the minds of UFO hopefuls racing at ludicrous speed. The cigar-shaped spacecraft is a classic design in science fiction, after all—Rama, the Doomsday Machine, the Heptapod Shells, the Nauvoo/Behemoth/Medina Station, Zentradi warships, the Infinity. (Could I go on? Yes. Yes, I could.)

This isn’t just UFO subreddit agitation. Real live physicists with advanced science degrees are on board (with the alien idea, not actually on board a spacecraft). “One possibility is that ‘Oumuamua is a lightsail, floating in interstellar space as debris from an advanced technological equipment,” wrote the Harvard astrophysicists Shmuel Bialy and Abraham Loeb for the journal Astrophysical Review Letters last year. “Alternatively, a more exotic scenario is that ‘Oumuamua may be a fully operational probe sent intentionally to Earth vicinity by an alien civilization.”

Few scientists rushed to defend Bialy’s and Loeb’s hypothesis. As an astronomer from another Ivy League school—Cornell’s Carl Sagan—once put it, extraordinary claims require extraordinary evidence. And no one is flying to ‘Oumuamua anytime soon to find out. It has left the building, where “building” equals solar system.

Loeb, one hastens to point out, has a targ in this hunt. He is chair of the advisory committee for Breakthrough Starshot, a program to build a solar sail-powered spacecraft like the one Loeb thinks ‘Oumuamua could be, funded by the Kremlin-backed venture capitalist Yuri Milner. But that doesn’t mean Loeb is wrong. “Imagine if cavemen had been shown the smartphone you’re using to record me. What would they have thought about this special rock?” Loeb told the Israeli newspaper Haaretz this week. “Now imagine that ‘Oumuamua is the iPhone, and we are the cavemen. Imagine scientists who are considered the visionaries of reason among the cavemen looking at the device and saying, ‘No, it’s just a rock. A special rock, but a rock. Where do you come off claiming it’s not a rock?’”

(‘Oumuamua is a rock, almost for sure.)

Look, it’s not that scientists don’t want to find aliens. They really, really do. There’s a whole specialty in it. The SETI Institute—Search for Extra-Terrestrial Intelligence—is a $20 million-a-year non-profit. The latest issue of Astrobiology, for example, has a long article laying out the structure and goals of NASA’s “Ocean Worlds” program, a decades-long agenda for sending probes to the watery depths of the moons Callisto, Enceladus, Europa, Ganymede, and Titan (and maybe elsewhere in the solar system) to “characterize their oceans, evaluate their habitability, search for life, and ultimately understand any life we find.” In that same issue, a team of researchers also attempts to model what would happen to life on a rocky planet like ours in orbit around a touchy, low-mass star with a habit of flaring radiation, and another group exposes a tough Earthling bacteria species called Sphingomonas desiccabilis to simulated Martian brine to see if it could survive—something you’d prefer not to happen if the bacteria contaminates a Mars-bound probe. Nobody wants a NASA robot to carry a conquering invasive species to Mars, as it would tend to throw off the search for actual Martians. It’s a popular field, in part because lots of people—myself included—would like it to succeed.

Yet, alas, it has not. In the absence of that peer-reviewed success, the civilian world looks elsewhere. And it’s often in the places of greatest uncertainty where people can begin to see the supernatural, the paranormal. “A UFO is, by definition, unidentified,” says Susan Lepselter, an anthropologist at Indiana University and author of The Resonance of Unseen Things: Poetics, Power, Captivity, and UFOs in the American Uncanny. Tracked by astronomers, scanned with all kinds of remote sensing technology, written up in journals— ‘Oumuamua was anything but unidentified. It was, however, anomalous. The science on ‘Oumuamua left just enough room for speculation, especially by respected Harvard researchers with tenure.

The idea that ‘Oumuamua was an alien spaceship went memetic as fast as information could spread, due in no small part to articles in the popular press that restated Bialy’s and Loeb’s claims. (Hi!) The “it’s aliens” explanation feeds a specific appetite, whether it’s ‘Oumuamua or the reports earlier this month of fast repeating bursts of radio signals from interstellar space. “We simultaneously hope for aliens and dread them, and this is true in both scientific and vernacular cultures,” Lepselter says. “It’s a pretty universal experience to engage with questions of what is out there, what is beyond the human, beyond the ordinary.” Since the Atomic Age, aliens have come to personify Earth’s vulnerability in the minds of Americans. “They’re always about a technology that is advanced in some way that either might rescue us or destroy us.”

‘Oumuamua was an object but also a metaphor—propelled by gravity, the solar wind, and wishes. “And then suddenly it’s gone, and you can’t observe it anymore, at least meaningfully,” Lepselter says. “What’s left is interpretation.”