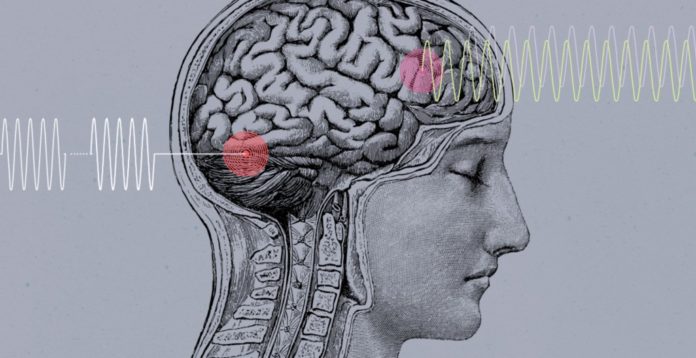 Focused beams of ultrasound can reach deep into the brain to deliver drugs or gene therapies to targeted areas with millimeter precision. (Credit: Knowable Magazine)

Most parents’ first glimpse of their children comes in ultrasound images taken months before birth. But ultrasound could soon offer much more than prenatal portraits. In the past few years, researchers have opened a new door for ultrasound, developing techniques that harness the familiar, safe and noninvasive sound waves to control genes, alter brain function and deliver drugs to targets with millimeter precision.

The advance of what’s being termed sonogenetics offers a new twist on one of biology’s biggest recent successes. For about a decade, biologists have been able to control genes and nerve cells by activating light-sensitive proteins with laser light. The technique, known as optogenetics, has transformed the field of neuroscience, and its use is spreading to many other branches of biology. With light, researchers can now control the firing patterns of individual nerve cells, turn on specific regulatory genes in particular cells to see how this affects development, and do many other things. But optogenetics faces a critical shortcoming: Light doesn’t penetrate very far into living tissue, so its applications are mostly limited to tiny, transparent animals, cell cultures in petri dishes and where optical fibers can be surgically implanted into deeper tissue.

Ultrasound waves, in contrast, penetrate deep into tissues — hence their use for fetal imaging. They also can be focused almost as precisely as laser beams. At that millimeter-sized focus, ultrasound pulses can gently warm or physically jiggle cells. (More intense pulses can heat cells enough to kill them, an effect long used to destroy rogue regions of the brain to treat disorders such as essential tremor, a Parkinson’s-like disease.)

As researchers develop cellular switches that are sensitive to temperature or vibration, they are gaining control over cellular processes beyond the reach of optogenetics. “This has the potential to provide the core capability of optogenetics, but now you can do it noninvasively in deep tissues,” says Mikhail Shapiro, a chemical engineer at the California Institute of Technology in Pasadena. 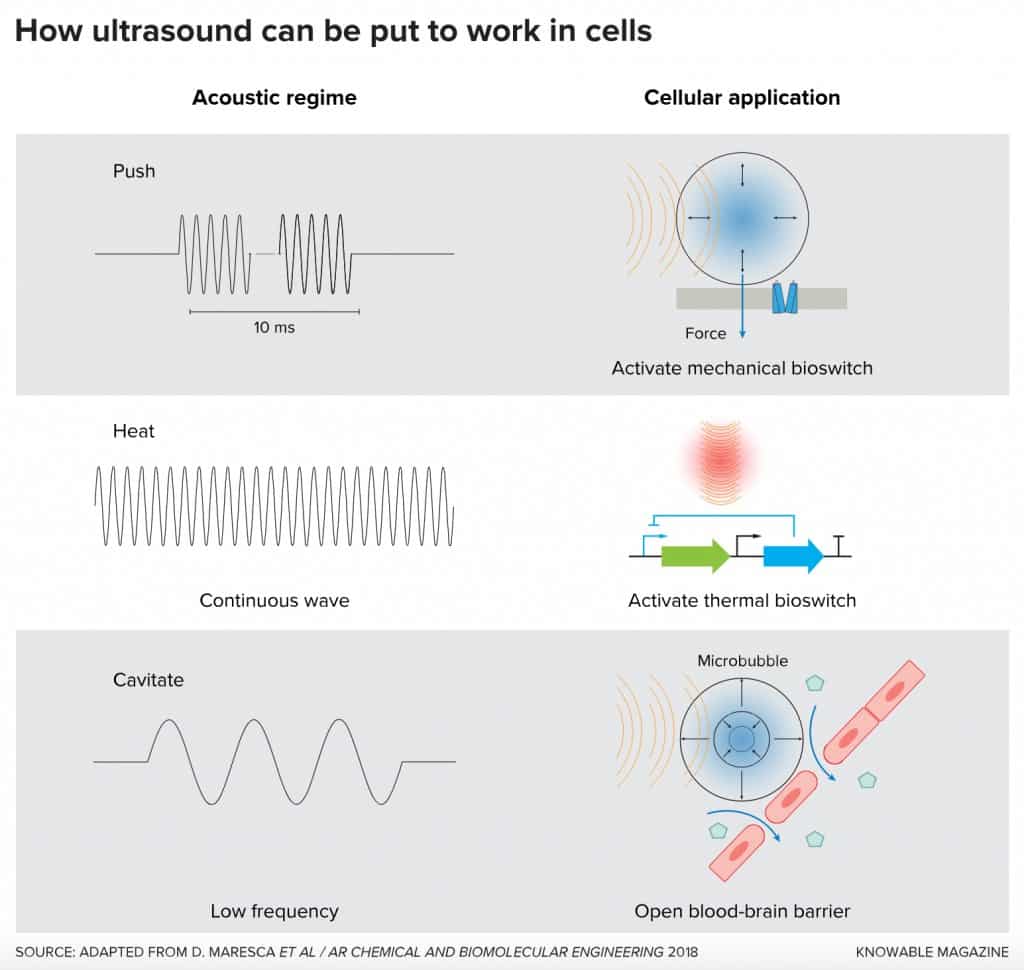 Researchers can use focused ultrasound waves to control cells by pushing motion-sensitive molecular switches (top), by heating temperature-sensitive ones (middle), or by causing microbubbles in blood to swell and collapse (bottom), stretching the walls of surrounding blood vessels and allowing small molecules to pass through.

For example, Shapiro is developing temperature-sensitive switches to control gene function. Most cells naturally have switches of this sort, but those typically aren’t powerful enough for research use: gentle warming turns up gene activity only about tenfold, which can be difficult to detect amid all the processes going on in a living organism. But Shapiro’s team found two proteins — one from a bacterium, the other from a virus — that had a 300-fold effect on gene activity over a 3-degree shift in temperature. After some genetic tweaking, he tuned these proteins to respond at different temperatures ranging from 32°C to 46°C. “As a result, now we have a whole library of thermal bioswitches, so you can pick the temperature you want them to operate at,” he says.

So far, his team has used genetic engineering to insert the temperature switches into bacteria. Other researchers are beginning to put them in mammalian cells, too.

Still others are developing genetic switches that are activated by ultrasound-induced vibrations, rather than heating, with a report last year on the technique’s use in cancer immunotherapies. Eventually, it could also be used to explore the function of genes by selectively turning them on or off in particular cells to see what happens.

Researchers have also found that the right sort of focused ultrasound pulses can somehow excite or inhibit nerve cells directly, even without specially engineered switches. The effect is not as precise as the switches, but can be sufficient for some studies.

Squeezing Past the Blood-brain Barrier

Ultrasound may also find use as a tool to insert genes into specific brain cells called neurons. Ordinarily, cells in intact, living brains are difficult to genetically engineer, because the cells lining blood vessels in the brain seal tightly against one another to keep pathogens and large molecules from entering the brain. This blood-brain barrier keeps out the viruses typically used by genetic engineers to introduce new genes.

Nearly two decades ago, Kullervo Hynynen, a medical biophysicist now at the Sunnybrook Research Institute in Toronto, showed that focused ultrasound could gently stretch those tight junctions and open the blood-brain barrier. It did so by agitating tiny microbubbles that are often injected in the bloodstream to improve visibility on ultrasound scans. His team and others have used the method to deliver chemotherapy drugs to specific parts of the brain while sparing the rest.

Now Shapiro and his colleagues have used the same technique to slip gene-toting viruses into targeted brain regions. Once through the blood-brain barrier, these viruses can permanently add new genetic switches to those brain cells. The switches can be activated by molecules small enough to cross the barrier on their own.

“We do this brief ultrasound treatment, get the genes into that part of the brain, and then whenever we want to control the neurons at that location in the brain, we just give a pill that turns these neurons on and off,” says Shapiro. His team has used the technique to block the formation of fear memories in mice by selectively inactivating neurons in the hippocampus, a key region for memory that is implicated in anxiety disorders and Alzheimer’s disease.

A third approach uses ultrasound to control brain activity by triggering the release of drugs in specific regions. One particularly promising example involves the anesthetic propofol. Raag Airan, a radiologist at Stanford University, and his colleagues bind propofol to oily droplets in the blood, which sends the drug around the body. A pulse of focused ultrasound releases the propofol in a specific area. Detached from the droplets, the drug is now in a form small enough to cross the blood-brain barrier on its own and temporarily knock out the function of brain cells at that site. 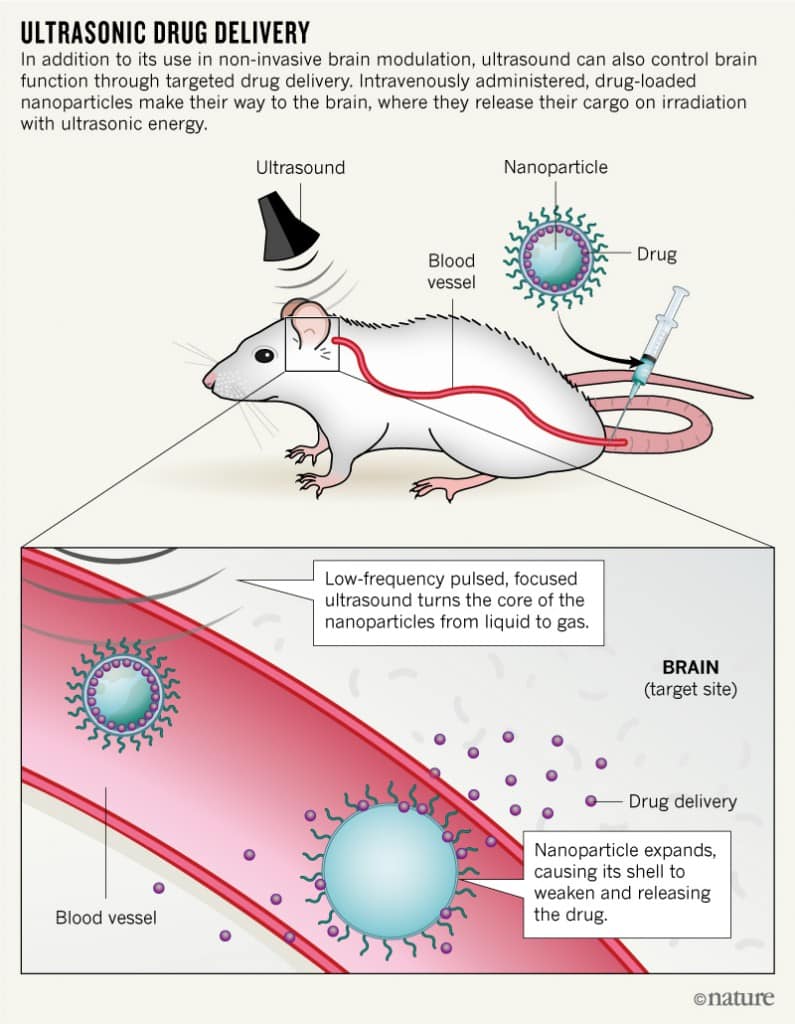 One example of how ultrasound can be used deliver drugs to a precise target in a rat brain. (Credit: E. Landhuis/Nature 2017)

Besides its use as a research tool, the technique should prove useful for neurosurgeons planning to destroy a particular brain region — to treat seizures, for example — but who want to make sure that the ablation will not have severe side effects. The focused release of propofol should let surgeons preview the effect of their proposed surgery. “The plan is to release this drug only in that specific region and use that to see whether this is the site we want to remove,” says Charles Caskey, a biomedical engineer at Vanderbilt University Medical School in Nashville, Tennessee, who collaborates with Airan’s team.

So far, most of these uses of sonogenetics are still in the proof-of-concept stage, where researchers are verifying that they work and building an arsenal of trusted techniques. Only then will actual clinical and research applications become possible. However, if the techniques pan out, both researchers and medical workers could soon have powerful, new, noninvasive tools at their disposal. If the recent burgeoning of optogenetics is any guide, that’s likely to be a very good thing.

This article originally appeared in Knowable Magazine, an independent journalistic endeavor from Annual Reviews. Sign up for the newsletter.

Five Technologies That Blur The Line Between Human and Machine

Hassan Aftab - January 31, 2016 0
The most renowned and influential leaders related to business and state got together this past week in Switzerland. They convened for the sole purpose...

Big Tech Isn’t the Problem With Homelessness. It’s All of Us

How Much Data Is Generated Every Minute? [INFOGRAPHIC]