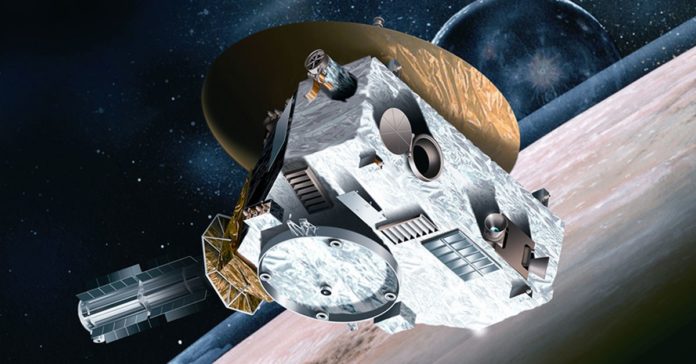 NASA just released the best images yet of Ultima Thule, the most distant world ever visited by a spacecraft. You’ll want to grab your 3D glasses if you’ve got ’em—we’re going stereoscopic.

On New Years’ Eve, following a 13-year trip to deep space, NASA’s New Horizons spacecraft made a close pass of Ultima Thule, a small, icy world drifting 4 billion miles from the sun in the unexplored “third zone” of our solar system. The probe zipped by at upwards of 31,000 miles per hour, about the same speed it was going when it passed Pluto in 2015. But Pluto is 100 times the size of Ultima, which measures just 20 miles long. So New Horizons had days to capture photographs and spectrographic readings of the former planet, but for this smaller cosmic quarry, it only had a matter of minutes. New Horizons’ visit was brief, but momentous: The mission’s success makes Ultima Thule by far the most distant object ever to be imaged up close.

At first, Ultima Thule appeared as a bowling-pin-shaped blur. A day later, the pin resolved into a snowman-shaped world with two distinct lobes.

New Horizons’ initial observations of Ultima Thule have been trickling back to Earth since the dawn of the new year. The transmission time between the edge of the solar system and our planet is a little more than six hours, and the download rate is just 500 bits per second, so the lowest-resolution imagery arrived first: New Years’ Day brought but a few tantalizing pixels, and Ultima Thule appeared as a bowling-pin-shaped blur. A day later, things improved dramatically: Color imagery confirmed Ultima Thule is red but dark, like potting soil, and the pin resolved into a snowman-shaped world with two distinct lobes. “What you’re seeing is the first ‘contact binary’ ever explored by spacecraft,” said New Horizons principal investigator Alan Stern. “Two completely separate objects joined together.” The New Horizons team named the larger orb “Ultima” and the smaller one “Thule.”

Enhanced color imagery of Ultima Thule, captured by New Horizons on January 1 from a distance of 85,000 miles, confirmed the object’s reddish color.

On Thursday, January 3, New Horizons mission scientists revealed their best images of Ultima Thule to date—and they’re in stereo vision! Take a good look; these are the best images we’ll get of that icy world for the next few weeks:

Stereoscopic imagery of Ultima Thule raises questions about the topography and composition of the object.

No 3D glasses? No Problem. Try looking at the image below and crossing your eyes til the images overlap—the way you would with a Magic Eye illusion:

At press conferences this week, New Horizons mission scientists discussed what these early images tell us about how Ultima Thule formed, what it’s made of, and what its weird shape could tell us about the birth of our solar system.

The mottled appearance could indicate variations in topography or composition, though it will be several weeks or even months before mission scientists know more. The neck appears significantly brighter than either of the lobes it connects—a result, perhaps, of smaller material collecting at the bottom of the steep slopes of the two smooshed together spheres.

How that smooshing happened is of great interest to the New Horizons team. Mission scientists speculate that the pair were once separate bodies that gently merged some 4.5 billion years ago, during the formation of the solar system. This coming together probably occurred at no more than a couple miles per hour—speeds so slow that “if you were in a car collision … you wouldn’t bother to fill out the insurance forms,” said Jeff Moore, head of NASA Ames’ geology and geophysics team.

If the lobes did, in fact, come together that gently, it could suggest that planets in the inner solar system formed through similar accretionary processes. Ultima Thule is not only the most distant object ever visited by a spacecraft, it is also, in all likelihood, the most primitive: Objects like it are believed to be remnants of the solar system’s formation that have been preserved in close to their original state by temperatures approaching absolute zero.

Studying Ultima Thule’s topography and composition, then, could reveal fundamental clues about the origin of the planets. But we do need to be careful about interpreting these early images, said planetary geologist Paul Schenk, a co-investigator on the New Horizons Mission. These first few photographs of Ultima Thule were all captured with the sun illuminating it head-on. Consequently, shadow and texture have been washed out. Variations in color could be due to peaks and valleys in the landscape, or differences in geology. Not until we have higher-resolution images, taken with the sun at a lower angle and supplemented by composition measurements, will the New Horizons team be able to say more definitively what Ultima is made of.

It’ll be several weeks until we hear more. Tomorrow, New Horizons will dip behind the sun, severing its communication with Earth. It will reemerge about five days later, at which point mission scientists will begin the more than year-long process of extracting data from the spacecraft. The very best images of Ultima Thule will arrive in February, after the connection has been reestablished and mission planners have decided which of the hundreds of megapixel-class images aboard the spacecraft to retrieve. It will take an additional 20 months to drain the spacecraft’s drives of the remaining images, spectra, and other data types.

The slow data transfer is the bad news. The good news: We’ll have new science on Ultima Thule on a more or less weekly basis from February through 2020. These stereoscopic images are just the beginning.