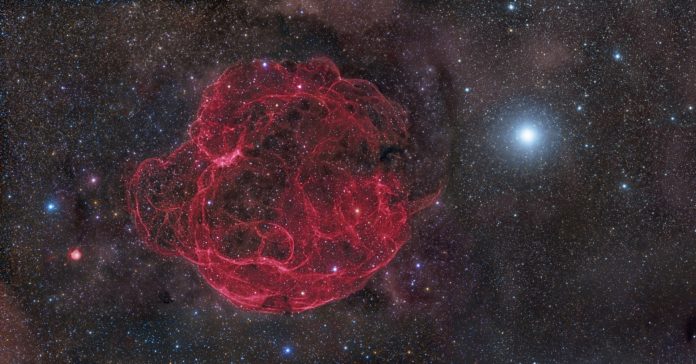 Even though Earth is floating in the void, it does not exist in a vacuum. The planet is constantly bombarded by stuff from space, including a daily deluge of micrometeorites and a shower of radiation from the sun and more-distant stars. Sometimes, things from space can maim or kill us, like the gargantuan asteroid that wiped out the dinosaurs. More often, stellar smithereens make their way to Earth and the moon and then peacefully settle, remaining for eternity, or at least until scientists dig them up.

Dark matter, if it exists, is probably in the latter category. If hypothetical weakly interacting massive particles (WIMPs) are real, their collisions with regular matter may have left fossil traces in the depths of the planet’s rock record. A team of physicists has proposed a new way to look for such fossil tracks as a way of hunting for dark matter, as I reported earlier this month.

But the search for cosmic debris on Earth has a long history. Other researchers have demonstrated that it’s possible to find fossil evidence of astrophysical particles in Earth’s crust. Some researchers are pondering how these cosmic events affect Earth — even whether they have altered the course of evolution. A new study suggests that energetic particles from an exploding star may have contributed to the extinction of a number of megafauna, including the prehistoric monster shark megalodon, which went extinct at around the same time.

“It’s an interesting coincidence,” said Adrian Melott, an astrophysicist at the University of Kansas and the author of a new paper.

When a star dies, its guts stream out into the cosmos. Among those stellar remains are isotopes, or variants, of elements like iron. One such isotope, iron-60, is rare on Earth but abundant in supernovas. In 2016 and 2017, astrophysicists traced iron-60 found on Earth’s seafloor and on the moon back to two ancient supernovasin Earth’s galactic neighborhood. One event took place roughly 2.6 million years ago, and another sometime between 6.5 million and 8.7 million years ago, researchers say.

“A lot of things would not leave a definite residue,” Melott said in an interview, but iron-60 does. “That is smoking-gun evidence of something happening.”

Given such a smoking gun, Melott turned to a question scientists have pondered since at least the 1950s: How might these supernovas affect Earth and its life? In the new paper, he describes how a supernova would produce a shower of subatomic particles called muons that could damage DNA, leading to widespread mutations in organisms, and even the extinction of species.

Muons are sort of like extra-heavy electrons. They can sail through Earth’s atmosphere with greater ease than protons and electrons. “They get to the ground, they hit you, and some of them will interact with you, and damage your DNA, Melott said. “They are in a sweet spot for affecting ground-based life.”

Melott hypothesized that a supernova around 2.6 million years ago would have increased the flow of muons streaming through the atmosphere several hundred times over. He and his coauthors estimated that cancer rates could have increased by 50 percent for an animal the size of a human. For a mammoth or a megalodon — which was the size of a school bus — the radiation dose would be even worse, Melott said.

The idea that supernovas might affect life on Earth is not completely new. The paleontologist Otto Schindewolf proposed in the 1950s that supernovas might have induced mutations in large animals. But his theory did not catch on. In 1968, the astronomers K.D. Terry and W.H. Tucker suggested that mass extinctions might have been caused by nearby exploding stars, and the hypothesis has been reanimated several times since.

Yet most theories blame the die-offs on widespread climate changes, not on direct mutations. Supernova explosions could obliterate Earth’s ozone layer, for instance, which would wreak havoc on marine plankton and coral reefs. Supernovas could also generate an excess of cosmic rays that could seed cloud formation, leading to a “cosmic-ray winter,” Henrik Svensmark of the Technical University of Denmark wrote in an email.

Svensmark’s work shows that Earth’s geological record coincides in some cases with the expected flux of supernova-related cosmic rays. And a 1995 paper by the physicists John Ellis and David Schramm concluded that catastrophic supernovas could be expected every few hundred million years, in keeping with the pace of mass extinctions.

As for Melott’s hypothesis that the single supernova 2.6 million years ago led directly to extinctions, he points to a few lines of evidence. At the Pliocene-Pleistocene boundary 2.6 million years ago, some 36 percent of marine genera went extinct, mostly in coastal waters. Larger animals would catch a higher muon dose in those regions, Melott points out.

But unlike those of iron-60 and WIMPs, the mark of muons would not remain in the fossil record, making the direct connection between muons and extinctions all but impossible to prove. “These muons would really not leave any trace,” Melott said.

Even if muon showers and iron-60 from dying stars cannot be directly linked to extinctions, their presence demonstrates a profound truth: Earth, and everything on it, is a part of the universe, not apart from it. The stars may indeed hold some answers to our fates.

Yikes, WhatsApp exploit allowed spyware to be installed with a phone...

How Adidas and Carbon are changing the sneaker supply chain

The Shape-Shifting Robot That Evolves by Falling Down