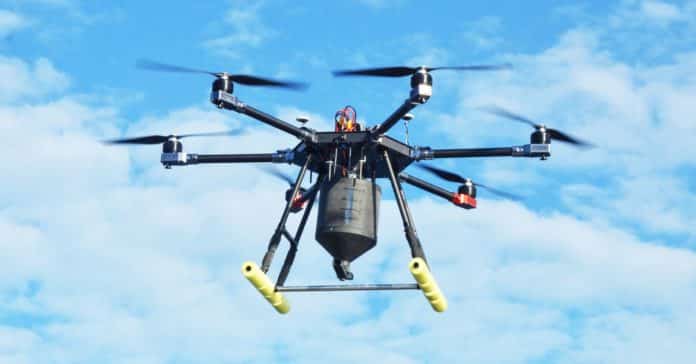 I get the feeling you don’t dislike rats enough. Because your struggles with the rodents chewing through your house pale in comparison to the problems wrought by rodents chewing through entire island ecosystems. Release just one pregnant rat on an island and soon enough the invasive predators will have decimated that pristine environment like an atom bomb. Sure, rats on their own are pretty neat, but we’ve got a nasty habit of transporting them where they don’t belong, at which point they transform into menaces.

Such is the plight of the Galapagos Island of Seymour Norte, a speck of 455 acres off the coast of Ecuador. In 2007, conservationists succeeded in ridding the island of invasive rats, but a decade later, the fiends had returned, likely by swimming from the neighboring island of Baltra.

Realizing the impending doom of Seymour Norte’s endemic species—rats eat both the eggs and hatchlings of birds, as well as reptiles like iguanas—conservationists again declared war, this time unleashing a new weapon: drones. Flying autonomously along predetermined routes, the drones have been dropping rodenticide bombs with extreme precision, down to half a meter accuracy. On Seymour Norte, officials and conservationists are once again banishing the rats, but the war against invasive species for the purity of the world’s islands has only just begun.

An island is an exceptional place, each one host to an ecosystem like no other on Earth. One common theme among islands, though, is that they’re often devoid of mammals (save for bats), which unlike birds and insects struggle to make the journey from the mainland. So when a mammal like a rat does arrive, it sends the ecosystem into chaos.

Such was the situation on Seymour Norte. Among other things it is the home of the swallow-tailed gull, the only nocturnal gull on Earth. Having evolved in isolation from rats, species like this gull don’t know how to deal with the voracious predators. Unchecked by predators of their own, the rats also eat the insects that serve as pollinators on the island, leading to cascading effects.

“You’ve got consumption of key species of cactus and a number of other plant species that provide support for nesting seabirds,” says Chad Hanson, project director for Island Conservation, which led the eradication with the government of Ecuador. “It’s this continuous impact over time that eventually leads to large-scale habitat degradation.” Another weird side effect: Coral reefs rely on nitrogen-rich bird poop as a nutrient. So when the bird population crashes, the critters in the surrounding waters also suffer.

The answer for Seymour Norte was drones—big ones. Weighing 55 pounds, the six-rotor robots carry 44-pound payloads of specially designed rodenticide pellets. Those are colored blue, which research shows doesn’t attract the attention of birds. Working from a boat offshore, operators manually launch and land the drones, but let them fly a predetermined bombing run on their own.

A helicopter could also perform this kind of mass eradication, as the Nature Conservancy has done against invasive ants from Santa Cruz Island off the coast of California. But whereas Santa Cruz is 100 square miles, Seymour Norte is less than a single square mile. That requires precision. “We don’t want to put bait where rodents don’t exist,” Hanson says. “We don’t have any interest at all in seeing bait go in the water or ponds.”

And that precision is working—the team says it is nearing eradication. Now Island Conservation is thinking about other places that might benefit from such drone tactics. “You can take a drone and pack it up and put it on a plane and you can go anywhere in the world with it,” Hanson says. A helicopter, by contrast, is nowhere near as portable nor as cheap to deploy. “That’s effectively opening up a door to a whole new suite of islands that haven’t been feasible in the past.”

Drones won’t work everywhere, of course—in some places the infestations are so widespread that only the broad reach of a helicopter can make a difference. “With the work we’re doing, drones wouldn’t be a feasible way to deliver bait because of the scale and scope of the infestations we’re looking at,” says the Nature Conservancy’s Christie Boser, lead scientist of the ant eradication program on Santa Cruz Island.

A complicating factor, though, is that this war against invasive species doesn’t work quite like a typical war, where you might win and sign a treaty and the two nations go about their business. Fighting invasive species demands constant vigilance, as the return of rats to Seymour Norte shows. It demands constant monitoring to make sure more rats don’t swim from neighboring islands and establish themselves once again. On an island like Santa Cruz, where ships bring tourists and scientists, keeping out invasive species requires strict controls to ensure ants and other unwanted creatures don’t hitch a ride.

The sad reality is that few islands are safe from human-introduced invasive species. Even a seemingly remote island that people never visit is at risk—all it takes is one pregnant rat swimming from one shipwrecked vessel to throw the ecosystem into chaos. While drones can’t fix all the ecological messes we’ve made, on at least one island, they’ve helped win a pivotal battle.

Layer1 wants to thrive in the age of the crypto crash

GizmoCrazed - December 26, 2018 0
A year ago, crypto was reaching ever new highs, and I was talking about whether ICOs would supplant the VC funding round and warning...

See Tesla’s Newest Feature: Cars That Come When You Summon Them

This Calculator Shows How Long It’s Going To Take You To...