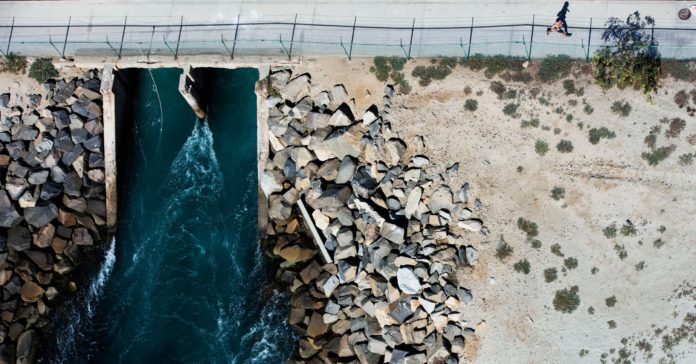 If only humans could drink seawater without dying, we wouldn’t find ourselves floundering in a water crisis. To not die, first you have to boil saltwater and collect the pure vapor, or get yourself a fancy membrane that filters out all the salt and, conveniently, sea life.

This is the controversial idea behind large-scale desalination—great big expensive facilities that turn saltwater into a liquid that won’t kill you. The classic criticism of desal is that it takes a tremendous amount of energy to process seawater, and we really shouldn’t be burning any more fossil fuels than we need to be. But a less chattered-about problem is the effect on the local environment: The primary byproduct of desal is brine, which facilities pump back out to sea. The stuff sinks to the seafloor and wreaks havoc on ecosystems, cratering oxygen levels and spiking salt content.

Unfortunately, scientists haven’t had a good idea of just how much brine the 16,000 operating desal facilities worldwide have been producing. Until now. Researchers report today that global desal brine production is 50 percent higher than previous estimates, totaling 141.5 million cubic meters a day, compared to 95 million cubic meters of actual freshwater output from the facilities. Bad news for the environment, to be sure, but things aren’t altogether dire: Desal tech is rapidly evolving, so plants are getting far more efficient, both in the brine they produce and the energy they use.

Desalination facilities typically fall into one of two categories: thermal and membrane. With thermal, you suck in seawater, heat it up to get the pure vapor, and pump the remaining brine back out to sea. With membranes, you push seawater at great pressures through a series of filters, which pull out all the salt and other contaminants.

Why? Because RO is cheaper and more efficient. Advances in membrane technology mean facilities require less and less pressure, and therefore energy, to filter seawater. As an added benefit, RO produces less brine. With thermal, 75 percent of the water you bring in might leave as brine. With RO, it’s more 50-50 freshwater to wastewater.

“It also depends on the feedwater,” or input water, says Edward Jones, coauthor on the new study and an environmental scientist at Wageningen University in the Netherlands. “Reverse osmosis is least efficient when you’re desalinating highly saline water, such as seawater. And it gets more and more efficient as feedwater salinity drops.”

This is an important consideration because not all desal facilities are processing seawater. In fact, if you take a look at the map above, you’ll see a great number of them are inland. These are processing brackish (i.e., only slightly salty) water from aquifers or rivers for drinking, or for use in industry and agriculture. They’re by nature more efficient than coastal plants that process seawater.

That’s part of the reason why coastal plants in the Middle East and Northern Africa produce an astounding proportion of the world’s desal brine. A total of 173 countries and territories run desal plants, but only four nations—Saudi Arabia, the United Arab Emirates, Kuwait, and Qatar—produce 55 percent of global desal brine, according to the new study.

The second reason for the discrepancy is that in the Middle East they’re using older, inefficient thermal plants, while the rest of the world has been shifting to RO. “These plants are very, very expensive to build, so it’s not likely they’ll be taken offline,” says Jones. “So there’s still going to be these plants operating that produce vast quantities of brine, particularly in the Middle East, where they’ve got a very established network of thermal desalination plants.”

Countries in the Middle East can afford to keep running these energy-hungry things because they’re awash in oil money but poor in water resources. But as populations grow elsewhere around the world, and climate change drives droughts, desal has become an increasingly attractive option. (Analysts forecast an annual growth rate for the industry of close to 9 percent for at least the next four years. You can see just how much desal has boomed recently in the graph below.) For instance, last year Cape Town rushed to bring temporary RO plants online so the city wouldn’t wither amid a vicious drought.

“Increasing water scarcity is the major driver,” says Manzoor Qadir, coauthor on the new study and assistant director of the United Nations University Institute for Water, Environment, and Health. “At the same time, if you look at the countries where desalination has tremendously increased, those are the countries that can afford it.”

The boom in desal brings with it a tidal wave of brine. Because this stuff is denser than typical seawater, it sinks to the seafloor and disrupts vibrant communities of life, which find themselves wanting far less salt and far more oxygen. Facilities can mitigate the environmental impact by, for example, mixing the brine with seawater before pumping it out, to dilute it. They might also take care to expel the byproduct where currents are strongest, thus dissipating the brine quicker. Inland, a plant might evaporate the water in pools and cart away the remaining salt.

But brine is more than just hypersaline water—it can be loaded with heavy metals and chemicals that keep the feedwater from gunking up the complicated and expensive facility. “The antifoulants used in the process, particularly in the pretreatment process of the source water, accumulate and discharge to the environment in concentrations that can potentially have damaging effects on the ecosystems,” says Jones. Dilution may help with the hypersalinity problem, but it doesn’t get rid of the chemical toxins.

But herein lies opportunity: The discharge can also contain precious elements like uranium. This might be enough incentive to turn desal brine from a noxious byproduct into a source of revenue. Or you might use evaporative pools inland to produce commercial road salt for deicing roads. And that could help clean up the industry, because capitalism.

“There’s definitely economic opportunities available,” says Jones. “That’s why we stress there is positive news here as well. There’s an opportunity as well as it currently being a big challenge.”

Desal, for all its faults, isn’t going anywhere. As it gets cheaper, adoption will continue to grow. Middle Eastern countries full-tilt rely on it, while other regions, like Southern California, use it to supplement traditional—and increasingly unpredictable—sources of water. A plant run by Poseidon Water, for instance, produces 10 percent of San Diego County’s water supply.

“That is enough water to serve 400,000 residents,” says Jessica Jones, spokesperson for Poseidon. “This is the only new water supply in the county that is not dependent on snowpack in the Sierras or local rainfall—truly climate-resilient.”

Except, that is, for the fact that sea levels are rising due to climate change, which threatens seaside desalination plants the world over. And ironically enough, these facilities are sucking up massive amounts of energy, thus contributing to the emissions problem. “From an impact perspective, the energy intensity is huge,” says Michael Kiparsky, director of the Wheeler Water Institute at UC Berkeley, who wasn’t involved in this study. “Even if powered by renewable energy sources such as solar or wind, you’re still using a tremendous amount of energy, which in principle could go elsewhere to displace fossil fuel consumption.”

“Desalination is not a panacea,” Kiparsky adds. In a place like California, it can be a complement to more traditional sources of water like snowpack. And while the efficiency of these plants will improve, this is still a fundamentally energy-ravenous technology. “There are theoretical limits to the energy intensity reductions that are possible for seawater desalination,” says Kiparsky. “It will never be cheap.”

This is a terrifying world we’ve built for ourselves, to be sure. But perhaps it’s not too late to clean up our act.

GizmoCrazed - July 19, 2011 0
Check out the trailer of the upcoming Dark Knight sequel, The Dark Knight Rises. The trailer comprises of scenes from the previous two films, but also has...