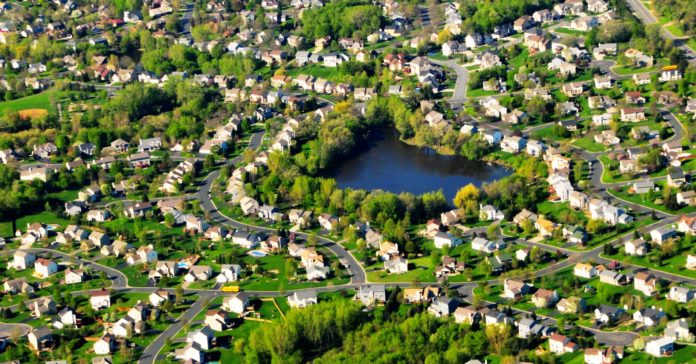 Jake Anderegg, the Utah state senator representing Salt Lake City and Provo, didn’t actually mean to fight climate change. It was sort of an accident. As in a lot of places in the US, housing in Anderegg’s district is growing scarce and more expensive. So he’s pushing a proposal that would inject money into loans for constructing more housing, especially near transit corridors. It would also make it easier to build little behind-the-main-house houses, technically “accessory dwelling units.” Denser cities and reductions in car use are both big factors in lowering emissions of greenhouse gases, so Anderegg’s proposal is pretty good if you care about such stuff.

The thing is, he kind of doesn’t. Smog above Salt Lake City? Sure, he wants to fix that. But climate change? “No, actually,” Anderegg says. “I’m a conservative Republican from northern Utah County, and I won my last election by 96 percent of the vote. It’s not really something my constituents care about.” ([Pushes up glasses, raises index finger]: Anderegg won his senate seat in 2016 unopposed; he won a 2014 re-election to the Utah House in 2014 with 82 percent of the vote.)

Point is, Anderegg wants transit-oriented development because his constituents care about air quality and life quality. If carbon should happen to get cut anyway? Hey, these things happen.

Cities across the US are rethinking their policies on homebuilding and transportation. Minneapolis lifted a longstanding, exclusionary ban on multifamily housing. San Francisco joined a few other cities in ending requirements that new developments have a minimum number of parking spaces. Policymakers from big cities in Oregon and California have proposed statewide revisions to local zoning rules, making possible denser, multifamily homes and public transit. Communities like Austin and Berkeley, typically suspicious of new development, elected city council members with YIMBY-like platforms. (Citylab had a good roundup of the 2018 action.) And now the new governor of California, Gavin Newsom, has released a budget with a $1.3 billion goose to housing construction in cities.

In most of these cases, the arguments in favor of the policies have been about economics and justice. But oh, hey, cool: They also save the planet. “One goal is to increase market-rate and low-income housing to make housing more affordable. Number two is ending exclusionary zoning,” says Scott Wiener, a California state senator who is proposing a new version of a landmark transit and housing bill as he takes over the chair of the state’s Housing Committee. “But number three is reducing carbon emissions from transportation. When we have hyperlow density zoning near job centers and public transit, we force people to commute long distances, and that undermines our climate goals.”

As is often the case with climate and emissions science, the details of how denser cities and public transit reduce emissions get more complicated the harder you squint at them. The US alone emits almost half the world’s transportation-derived carbon dioxide, and recent research suggests that low-density cities are the biggest culprits—or at least that making those places denser would yield the biggest reductions. Broadly, denser cities tend to emit less carbon, but that can vary from zip code to zip code, even block to block, based on income level and a long list of other factors. It’s all supposed to put more housing on the market (reducing its cost), make neighborhoods more walkable, connect housing to work and recreation, and reduce vehicle miles traveled. “Collectively, these actions should clearly reduce per capita greenhouse gas emissions,” says Lucy Hutyra, an earth scientist at Boston University who specializes in the urban carbon cycle. “However, the devil is in the implementation details.”

In car-dependent California, for example, transportation emissions are a prime target. A recent California Air Resources Board assessment of progress toward more integrated transport and housing to reduce emissions confirmed that Californians have actually been driving more, and that the transition to zero-emission electric vehicles will take too long to matter. So, the logic goes, if you want to reduce vehicle miles traveled, you have to put houses closer to where people work and play and give them alternate means to make those trips. “It’s not a silver bullet, but it’s a powerful argument that people intuitively get,” Wiener says. “If you’re forcing people to commute two hours a day, that’s not great for the environment in addition to causing sprawl, building in wildfire zones, and covering up farmland and open space.”

Oregon too emits most of its greenhouse gases from transportation, and state leaders expect the same kind of housing crunch in the next decade as California is experiencing now. Tina Kotek, the speaker of the Oregon House of Representatives, has proposed that Oregon cities with more than 10,000 people should no longer be allowed to prohibit multifamily homes, as they do now—meaning duplexes, triplexes, and cottage clusters in areas now zoned exclusively for single-family homes. Architects and planners call that kind of building the “missing middle,” a form between houses and apartment blocks. Oregon cities are surrounded by urban growth boundaries to limit sprawl and protect forest and open space. But they’ve also resisted densification, which means scarcity and rising costs. “The proposal to legalize new housing types within single-family zones is part of a comprehensive plan to address our statewide housing crisis by creating more affordable options within urban growth boundaries,” Kotek said through a spokesperson. “While reducing carbon emissions is not the explicit goal of this proposal; it has the additional benefit of addressing climate change.” Many problems, one solution.

Climate and YIMBY advocates alike acknowledge that carbon emissions aren’t always—or even often—top of mind for voters. In advocating for Minneapolis’ bold attempt to end single-family residential zoning, policymakers leveraged justice and equity issues to emphasize climate, and vice versa. “We tried very hard to show that the two things are interconnected, almost symbiotic in how they work from a planning and land use standpoint,” says Heather Worthington, director of long-range planning in Minneapolis.

On a range of metrics, she notes, her city is near the bottom of the US in terms of racial equity. “It’s primarily people of color who’ve lived in impoverished areas that have suffered from disinvestment, and residents who are white who’ve had access to better schools, better transit, better retail,” Worthington says. Expanding access to those urban amenities means adding transit and building homes. Smaller, less expensive places to live also offer an urban alternative to empty nesters and people who can no longer (or no longer want to) deal with a house on a lot, and when they move their old house can become someone else’s starter home. Young people seem to value a more urban lifestyle, and don’t want to drive as much. And besides, new buildings are more efficient and require less carbon for heating and cooling. Again: Many problems, one solution.

This all comes with risks. Density changes neighborhoods, and the people who live in them tend to like them the way they are. That’s reasonable. Also, density in practice has often meant gentrification, which usually involves wealthier, whiter people displacing poor people and people of color from their homes. Unconstrained new development in poorer areas makes cities less diverse and worsens racial and economic inequalities. These are serious, bad outcomes that new housing policies have to deal with—often by requiring certain levels of subsidized affordable housing and putting limits on demolitions. But to be clear, exclusionary zoning already has made all those problems worse, and resistance to letting cities have more diverse building types and more diverse people types has inspired some suspiciously strange bedfellowship, with wealthy communities defending their “neighborhood character” with sudden concerns about poverty and displacement.

Pointing out that denser housing is critical to the future of the planet has had the side effect of separating climate hawks from chicken hawks. The city of Berkeley, for example—a bastion of blue so intense it’s nearly ultraviolet—recycles, doesn’t allow nuclear weapons, is working on ways to encourage electric car ownership, and has a solar-powered parking garage downtown. Yet some of the most divisive ongoing political fights involve opposition to the construction of housing, especially in the parking lots atop the city’s subway stations. “It can expose some of the hypocrisy of those who oppose density,” Elkind says. “There are liberals or progressives who oppose climate change, but they definitely don’t want that multifamily apartment building to go up next to transit if it’s in their neighborhood.”

That’s what Wiener says he found in his initial efforts to link development and transit in California last year. The Sierra Club’s California branch was a vocal opponent, for example. This year? So far, the environmental opposition is playing wait and see. “That hypocrisy is being called out a lot more, and we’re starting to see a shift,” Wiener says. “Any environmental agenda without land use and zoning reform, and more density near transit stops, is an incomplete environmental agenda.”

Ironically, this opposition has served to spread the ideology of densification further into the suburbs and exurbs as people get pushed out of cities. They take their urbanizing politics with them. Once reliably red parts of California went blue, or at least bluish, in the midterms in part because blue voters had moved there to find housing.

Which brings us back to Salt Lake City and State Senator Anderegg. Climate wasn’t behind his housing proposal this time (or his effort to replace diesel commuter rail locomotives with electric ones). But next time? “I’ll be frank with you. My district is changing. My district is the Silicon Slopes. We’re getting a lot of [California] Bay Area workers coming here, and they’re definitely concerned about emissions and whatnot,” Anderegg says. “It isn’t there yet, especially in areas like mine here in Utah County, but we’re very cognizant of the fact that if we don’t do something about emissions and reducing our impact on the environment, from the conservative side it has a deleterious effect on economic development, on the recruitment of a quality workforce, because nobody wants to live in a cesspool of bad air.” Bipartisan agreements are everywhere, if you know where to look.

A New State of Matter Has Been Discovered…

GizmoCrazed - March 3, 2014 0
The days when solid, liquid and gas were the only three states of matter were over when newer states such as plasma and superficial...

If You Can’t Smell Anymore, The Grim Reaper Maybe Knocking On...

Man Paralysed From The Waist Down, WALKS AGAIN!