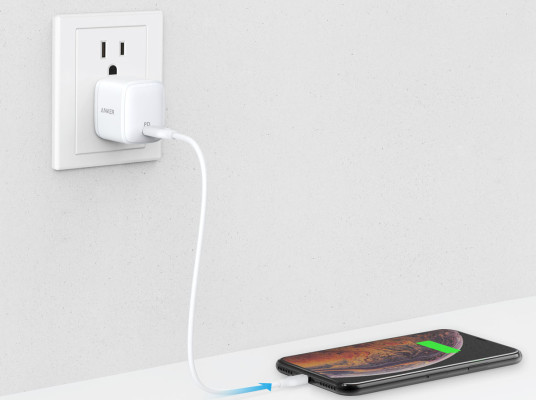 This charger needs to be in my life. It’s tiny. The new Anker PowerPort Atom PD 1 offers 30w charging in a package the size of a phone charger. It’s basically a 1.5-inch cube — if the plugs are ignored, of course. And it’s only $30.

Even with the small size, the Atom PD1 offers the same power delivery found in Apple’s much larger 30w USB-C charger: 5V @ 3A, 9V @ 3A, 15V @ 2A, 20V @ 1.5A. That’s good enough to recharge any phone, tablets including the new iPad Pro and small laptops including the new 13-inch MacBook Air.

Anker employed Gallium Nitride instead of Silicon, which allowed the company to drastically reduce the size of the components. Apparently, GaN offers increased performance with lower resistance and more efficient conductivity.

“I think that within the next 5 years, electronics companies will leave Silicon behind and will shift to GaN components,” said Steven Yang, CEO of Anker Innovations, said in a released statement. “We’ve had a great run with Silicon, but it’s time to move onto something better.”

This product has been in the works for sometime. Anker teased it in a 27w version in 2018 but I’m stoked to see the company upped the power output for its release.

The Anker PowerPort Atom PD 1 will be released in January for $30.