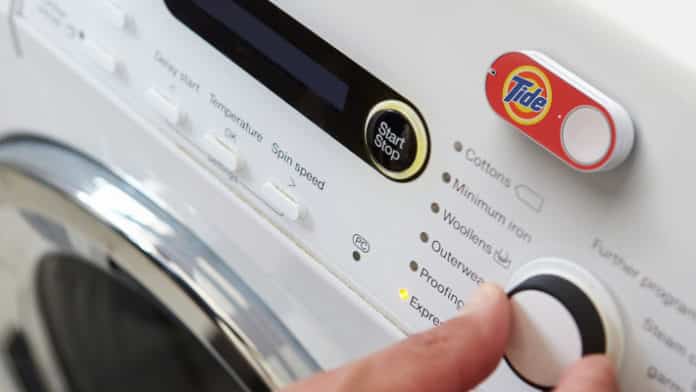 Amazon’s Dash buttons have been found to breach consumer e-commerce rules in Germany.

The push-to-order gizmos were debuted by Amazon in 2015 in an attempt by the e-commerce giant to shave friction off of the online shopping process by encouraging consumers to fill their homes with stick-on, account-linked buttons that trigger product-specific staple purchases when pressed — from washing powder to toilet roll to cat food.

Germany was among the first international markets where Amazon launched Dash, in 2016, along with the U.K. and Austria. But yesterday a higher state court in Munich ruled the system does not provide consumers with sufficient information about a purchase.

The judgement follows a legal challenge by a regional consumer watchdog, Verbraucherzentrale NRW, which objects to the terms Amazon operates with Dash.

It complains that Amazon’s terms allow the company to substitute a product of a higher price or even a different product in place of what the consumer originally selected for a Dash push purchase.

It argues consumers are also not provided with enough information on the purchase triggered when the button is pressed — which might be months after an original selection was made.

Dash buttons should carry a label stating that a paid purchase is triggered by a press, it believes.

The Munich court has now sided with the group’s view that Amazon does not provide sufficient information to Dash consumers, per Reuters.

In a press release following the ruling, Verbraucherzentrale NRW said the judges agreed Amazon should inform consumers about price and product before taking the order, rather than after the purchase as is currently the case.

It also expressed confidence the judgement leaves no room for Amazon to appeal — though the company has said it intends to do so.

Commenting on the ruling in a statement, Verbraucherzentrale NRW consumer bureau chief, Wolfgang Schuldzinski, said: “We are always open to innovation. But if innovation is to put consumers at a disadvantage and to make price comparisons more difficult, then we use all means against them, as in this case.”

Amazon did not reply to questions about how it intends to respond to the court ruling in the short term, such as whether it will withdraw the devices or change how Dash works in Germany.

Instead it emailed us the following statement, attributed to a spokesperson: “The decision is not only against innovation, it also prevents customers from making an informed choice for themselves about whether a service like Dash Button is a convenient way for them to shop. We are convinced the Dash Button and the corresponding app are in line with German legislation. Therefore, we’re going to appeal.”