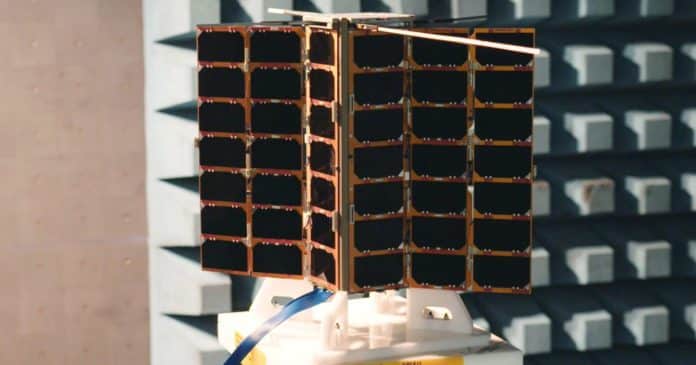 Inside Spire’s Boulder, Colorado, office, a conference-room computer beams those satellites’ knowledge from space to a screen.

These sats aren’t like the planet-observers you may be used to. In the world of remote sensing—the use of satellites to glean information about Earth—imagery has long ruled. But Spire’s smallsats don’t take pretty pictures: They use broadcasts from ships, aircraft, and other satellites to infer earthly conditions as disparate as tomorrow’s forecast and the movements of pirate vessels. The use of such small satellites to see Earth in new, nonvisual ways is set to grow in importance (and value) in the next decade—improving forecasts, making the shipping industry more efficient, and gathering invisible electromagnetic intelligence. Pictures will probably always be worth more, but these satellites are demonstrating there’s more to Earth than meets the eye. Now, Earth’s inhabitants—forecasters, miners, even experimental aviators—are trying to figure out what all this data can do for them.

Getting present weather conditions and future predictions right is tricky. Small changes—or small errors or uncertainties—can lead to wildly different outcomes. “The butterfly effect is real,” says Nick Allain, Spire’s head of “brand.” Even terrain makes a difference. “If you removed one of the Flatirons,” he says, referring to the sloping slabs of rock that poke out over Boulder, “your weather would change.”

Spire’s smallsats aim to gather more data points from across the planet to create global forecasts, not just ones focused on the US. But it’s doing that in a slightly strange way: The company’s orbiting sensors catch the signals from GPS satellites on the other side of the planet from them. Those signals have passed through a portion of the atmosphere, causing them to bend. By comparing how different frequencies bend, Spire can learn about the temperature, pressure, and humidity of the atmosphere, and feed that into its weather model. It’s a method called GPS radio occultation. Right now, the satellites collect around 1,000 GPS signals, whose tracks have criss-crossed the upper reaches of the planet, every day.

The project started with American GPS satellites, but the company added the ability to use signals from the European Union’s Galileo constellation. And with just a software update, says Allain, the satellites can suck in information from any position-and-navigation satellite, provided they get permission from the FCC. (Will Spire be using data from China’s BeiDou network? Allain can “neither confirm nor deny.”)

Much of the data that feeds into weather forecasts currently comes from NOAA. And while the agency has had, and will soon have, more radio-occultation smallsats of its own, it’s interested in learning whether it could also buy such data. It’s like how NASA now pays SpaceX for some of its launches instead of sending up all its own rockets. In 2016 NOAA awarded Spire and a company named GeoOptics, which uses the same technique, small grants to demonstrate that their data could potentially improve NOAA’s weather forecasts. The companies had until April 30, 2017.

But the pilot didn’t go as planned: Due to launch delays, GeoOptics didn’t even have any satellites in orbit before the end of the trial period. Allain says NOAA was happy with Spire’s quality (a statement I could not verify with NOAA because of the government shutdown), but that “they were somewhat displeased with the amount of the data.” Spire, too, had launch delays, so it didn’t have its full fleet of satellites in orbit and only managed to collect the desired quantity of data towards the trial’s end. (Today, the satellites collect daily the same amount they did, total, during the NOAA trial.)

Still, NOAA initiated a second round, with harder and stricter requirements. It gave second contracts to Spire and GeoOptics (which now has some actual satellites), and one to PlanetIQ (which does not, but also plans to use radio occultation).

NASA has a similar program. Spire nabbed a contract there. So, too, did a company called Planet, which operates a huge fleet of satellites that image Earth’s entire landmass every day, and DigitalGlobe, which sells imagery so high-def you could see a laptop from space.

Science agencies aren’t the only ones that see potential in the boom of private small satellites: The National Geospatial-Intelligence Agency (NGA) and the National Reconnaissance Office, your favorite spy centers, have the Commercial GEOINT Activity Program. And Spire, together with Ball Aerospace, has already handed the NGA data about ship traffic in the far north.

Which brings us to ships. Allain pulls up a display of a flat Earth, covered in colored triangles marking the boats’ locations. They cluster along coasts, diffuse across the open ocean, and sluice down inland rivers. Each represents a vessel equipped with an “AIS” beacon, which broadcasts information like who it is, where it’s going, and how fast. International law requires certain commercial vessels, passenger ships, and those carrying dangerous cargo to have the system on board. Captains are generally required to leave the device on while navigating, and before unmooring. While on-the-ground receivers can’t see these broadcasts when ships are crossing the ocean, satellites can. And Spire isn’t the only one in the business of doing so. Others, like ExactEarth and OrbComm, have already established themselves.

Nevertheless, there are problems Spire hopes it’s well-suited to solve. For instance: pirates. The first thing a pirate will do is switch off the AIS. But because Spire’s satellites will have a set of “and then it was here and then it was there” positions for any given ship, the company knows its last location to a reasonable precision. Someone can send those coordinates to a partner’s picture-taking satellite, and that sat could then spot it—potentially in the act of stealing a shipment of TVs. Also, AIS signals sometimes get garbled, especially in crowded areas like the South China Sea where the broadcasts interfere with one another. A ship’s identification might come through as “SS FUNXX12AA!~”, or a vessel might say, “I’m near Australia, okay now a little farther from Australia, but now in the arctic.”

“It didn’t teleport,” says Allain. (Or did it?) Machine learning algorithms could help sort these scrambled messages out.

The aircraft-tracking part of Spire’s operation is basically a copy-paste of the AIS system, but that program is still ramping up, with the first satellites having launched in late 2018. Still, Allain switches to a display of an Earth plastered with planes—green and red and yellow and orange icons, which look like flying fall leaves. Click on one, and it informs you of who it is and what its intentions are.

And interested parties can combine their own data with Spire’s—like the mining company that wants to know when, weather-wise, to pull their workers out of the ground, more precisely and predictively than its current method: a spotter who says, “Those clouds look dark.” Or like the (undisclosed) supersonic jet maker that’s interested in predicting when and where clouds might absorb its sonic booms, so that it can perhaps fly faster over populated areas.

For these aspirations, Spire has gotten around $140 million of investment, plus those smaller government contracts. Being the first big-big dollar recipient in a given sector does provide monopolistic advantage. “Most [venture capitalists], if they invest in a particular vertical, they would never invest in another company,” says Sumanta Pal, an analyst at consulting firm Northern Sky Research. “They would never invest in a competitor.”

But to whom much is given, much is required. And companies like Spire and Planet, which has gotten around $183 million of investment, have a lot to show for themselves. Planet takes pretty pictures, which speak more fluently for themselves. But when you have weirdo non-imagery data, the talk can be tougher. “There always seem to be more obstacles and roadblocks, and a longer time in convincing customers that your data has value,” says Dallas Kasaboski of Northern Sky.

But, at least according to the latest edition of Northern Sky’s Satellite-Based Earth Observation report, the market for the not-imagery satellite industry could jump to almost $255 million by 2027. Much of that (much more than today) will likely be from analysis and interpretation, not raw data, a shift that’s currently well underway in the more traditional satellite imagery sector. Still, these analysts project that the market will account for just 4 percent of the Earth-observation revenue eight years from now. And as those years pass, world-watching companies of all sorts will likely merge, buy one another, get bought, sell themselves, or just die. That kind of consolidation has already started, and more is probably coming. “We like to say here, ‘Not all of them will fly,‘” Kasaboski says.

But Spire’s employees are optimistic, even if they have to explain radio occultation more often than they’d like. In the corner of the conference room, a model of the company’s smallsat sits on a surface, fake solar arrays extended out from its body. Eight of the company’s satellites just launched from Russia, on December 27, 2018.

That’s kind of old hat, though. Having been through lots of launches, the company now observes them with chill. “We don’t have launch parties,” says Allain. Because of the inevitable and sometimes lengthy delays, “we’d have to buy nonperishable food.”

Nobody wants a celebration stuffed with Vienna sausages and canned peas. That’s an ambience—“Party like it’s the apocalypse,” as Allain puts it—that the office doesn’t need.