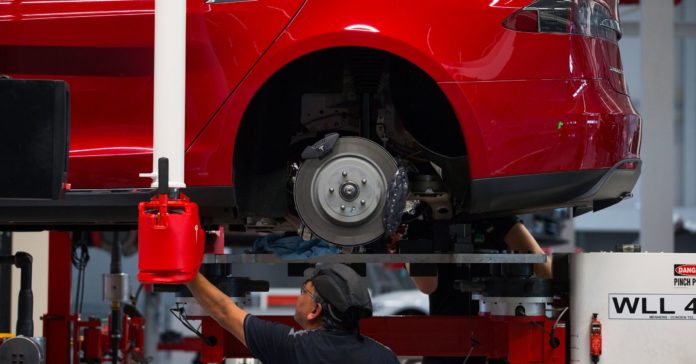 Elon Musk isn’t afraid to play around on Twitter. In a recent tweet, Musk suggested that a future Tesla would look like the flying car from Back to the Future.

Ha ha. Funny. But could it really work? What would it take to make a flying Tesla that converts from driving to flying mode with the thrust coming out of the wheels? Time for some physics.

I can think of a couple options for getting a flying Telsa off the ground. The first method would be rocket propulsion. This seems to be what Elon wants to use (a natural choice because of the connection with SpaceX). In fact, it appears he’s not even joking.

I’m not a rocket expert, but it seems like you would have to keep refueling the rockets. It would be a nice stunt, but not for everyday use.

However, there is another way to make a car fly—some type of air thruster. It doesn’t matter if you use some type of jet engine or a rotor, the physics is mostly the same. In order to hover, the flying car will take air from above the car and “throw” it down. Since air has mass, a change in velocity of this air would mean it has a change in momentum (where momentum is the product of mass and velocity). According to the momentum principle, this change in momentum requires a force—and it is this force that counteracts the gravitational force to make the car fly.

Of course, you can’t hover for free. Throwing this air down to produce lift requires energy. In order to hover, you need to keep using energy every second. The energy goes into the kinetic energy of the air which depends on both the mass and the velocity of the air. Since the car continues to throw air down, we really would like to look at the power (in Watts) needed to hover.

Here is where the size of the rotors comes into play. If you have really big rotors, you can “throw” down a bunch of air. This means the mass of the air is really high, so you don’t have to push it down with such a large velocity in order to get a force large enough to hover. The other option is to have smaller rotors with lower mass air but moving down at a much faster speed. But faster air has a consequence. It turns out that the power required to speed up the air depends on air speed raised to the third power. This is why a human-powered helicopter (yes, this is real) has such giant rotors.

In the end, the power to hover can be expressed as the following formula (based on fundamental principles).

Just to be clear, the ρ symbol represents the density of the air (around 1.2 kilograms per cubic meter) and the A is the total cross-sectional area of the rotors (or jets or whatever). I guess we are ready to make an estimation of the power required for this hovering Tesla. Perhaps we should approximate some values first. If you don’t like my estimates, you will get a chance to make your own down below.

Really, those are the only two estimates. Now for the calculation. The first thing I need to do is to use the mass of the car and the rotor size to calculate the speed of the air coming out of the tire things. After that, I can use the air speed to calculate the power.

Since python makes an awesome calculator, I am going to do this with code (and then you can change the values of stuff yourself). Just click “play” to run the code and “pencil” to edit it.

Just to be clear, that is 1.7 megawatts, which is quite a bit less than the 1.21 jigawatts (yes, it’s really gigawatts) required to make a car travel back in time.

So, if the car uses this much power to hover then how long could it stay off the ground? According to Wikipedia, the biggest Model 3 battery is 75 kWh (kilowatt-hours). Perhaps it would be better to write this as 0.075 megawatt-hours. So, if the hovering takes 1.7 MW then it could fly for 0.044 hours or 2.64 minutes. That’s not very long. But maybe that’s enough flying time to travel back in time.

GizmoCrazed - December 16, 2018 0
After the historic announcement in February 2016 hailing the discovery of gravitational waves, it didn’t take long for skeptics to emerge. The detection of these...

Here are some standouts from 500 Startups’ 22nd demo day