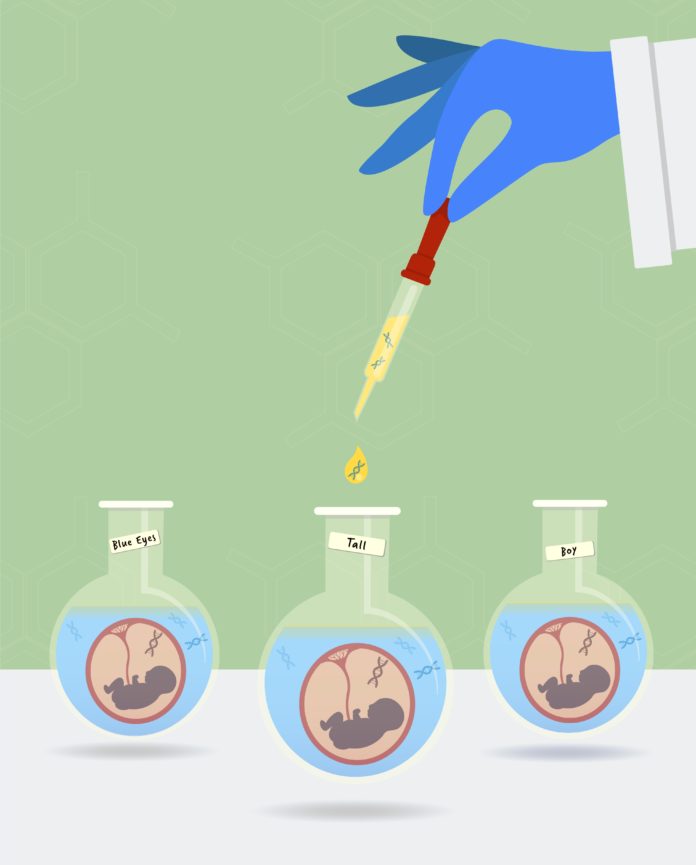 When Adam Nash was still an embryo, living in a dish in the lab, scientists tested his DNA to make sure it was free of Fanconi anemia, the rare inherited blood disease from which his sister Molly suffered. They also checked his DNA for a marker that would reveal whether he shared the same tissue type. Molly needed a donor match for stem cell therapy, and her parents were determined to find one. Adam was conceived so the stem cells in his umbilical cord could be the lifesaving treatment for his sister.

Adam Nash is considered to be the first designer baby, born in 2000 using in vitro fertilizaton with pre-implantation genetic diagnosis, a technique used to choose desired characteristics. The media covered the story with empathy for the parents’ motives but not without reminding the reader that “eye color, athletic ability, beauty, intelligence, height, stopping a propensity towards obesity, guaranteeing freedom from certain mental and physical illnesses, all of these could in the future be available to parents deciding to have a designer baby.”

The designer babies have thus been called the “future-we-should-not-want” for each new reproductive technology or intervention. But the babies never came and are nowhere close. I am not surprised.

I study the prediction of complex diseases and human traits that result from interactions between multiple genes and lifestyle factors. This research shows that geneticists cannot read the genetic code and know who will be above average in intelligence and athleticism. Such traits and diseases that result from multiple genes and lifestyle factors cannot be predicted using just DNA, and cannot be designed. Not now. And very unlikely ever.

Designer Babies Are Next

The inevitable rise of designer babies was proclaimed in 1978 after the birth of Louise Brown, the first IVF baby, as the next step toward “a brave world where parents can select their child’s gender and traits.” The same situation occurred in 1994 when a 59-year-old British woman stretched the limits of nature by giving birth to twins using donated eggs that were implanted in her womb at a fertility clinic in Italy.

The response was the same in 1999, when a fertility clinic in Fairfax, Virginia, offered sex selection of embryos to screen against diseases that only happen in boys. In 2013, when 23andMe was granted a patent for a tool that predicts the likelihood of traits in babies based on DNA of two parents, the question of patenting designer babies was raised. In 2016, when the U.K. permitted a woman to donate her healthy mitochondria to a couple using IVF to conceive a child, raising the number of parents to three, fears of unnatural children rose again. Last month, when Genomic Prediction, a New Jersey company, announced its DNA screening panel for embryos would also assess the risk for complex diseases such as Type 2 diabetes and heart disease that are caused by multiple genes, fears of engineering babies with high IQ or athletic prowess emerged.

The same issues arose on Nov. 26 when He Jiankui reported at the Second International Summit on Human Genome Editing in Hong Kong that he had successfully edited the DNA of twin baby girls born last month.

The designer baby doom scenarios have not evolved with the technology. It’s been the same story for decades. It’s the same “desirable” traits and the same assumption that parents want to select these traits if technology allowed. But no one seems to be questioning whether these traits are solely a product of our genes such that they can be selected or edited in embryos.

Wondering about designer babies was understandable in the early days, but repetition of these supposed fears now suggests lack of understanding of how DNA, and the genes they encode, work. 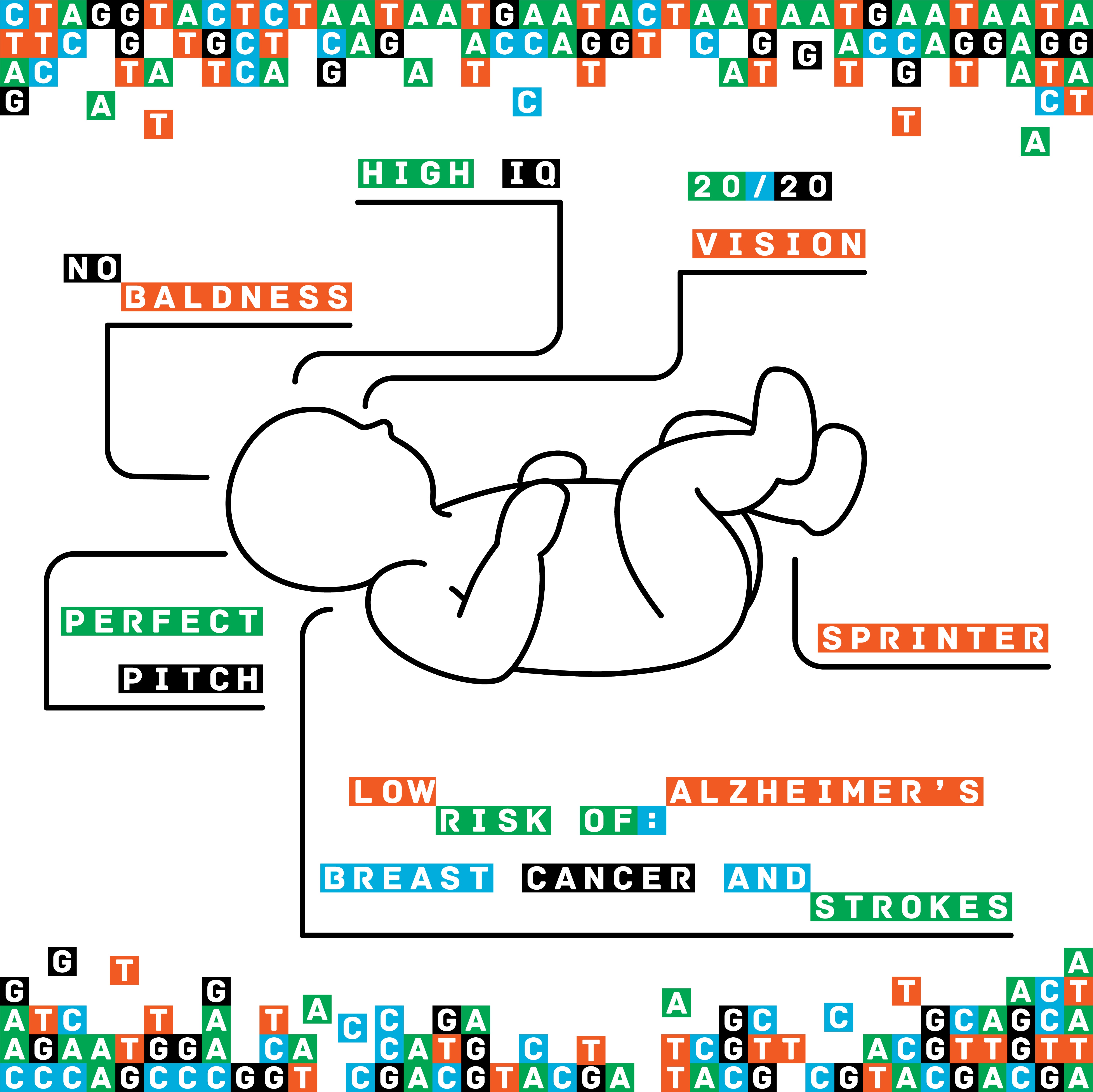 Picking the trait and writing the genetic code is a scenario that has been forecast since the birth of the first test tube baby.
olga boat/Shutterstock.com

Although there are exceptions, DNA generally differs between people in two ways: There are DNA mutations and DNA variations.

Mutations cause rare diseases like Huntington’s disease and cystic fibrosis, which are caused by a single gene. Mutations in the BRCA genes substantially increase the risk of breast and ovarian cancer. Selecting embryos that do not have these mutations removes the entire or main cause of disease – women who don’t have BRCA mutations can still develop breast cancer through other causes, like all women.

Variations are changes in the genetic code that are more common than mutations and associated with common traits and diseases. DNA variants increase the likelihood that you may have a trait or develop a disease but do not determine or cause it. Association means that in several large study populations, a DNA variant was more frequent among people with the trait than those without, often only slightly more frequent.

These variants don’t determine a trait, but increase its likelihood by interacting with other DNA variants and nongenetic influences such as upbringing, lifestyle and environment. To design such traits in embryos would require multiple DNA changes in multiple genes and orchestrating or controlling relevant environment and lifestyle influences too.

Let’s compare it to driving a car. DNA mutations are like the flat tires and the failing brakes: technical problems that make driving problematic, no matter where you drive. DNA variations are like the color and the type of car, or other features of the car that may affect the driving experience and even might create problems over time. For example, a convertible is a delight when driving on Hollywood’s Sunset Boulevard on a breezy summer evening, but cruel when crossing a high mountain pass in midwinter. Whether features of the car are an asset or a liability depends on the context and that context might change — they are never ideal all the time. 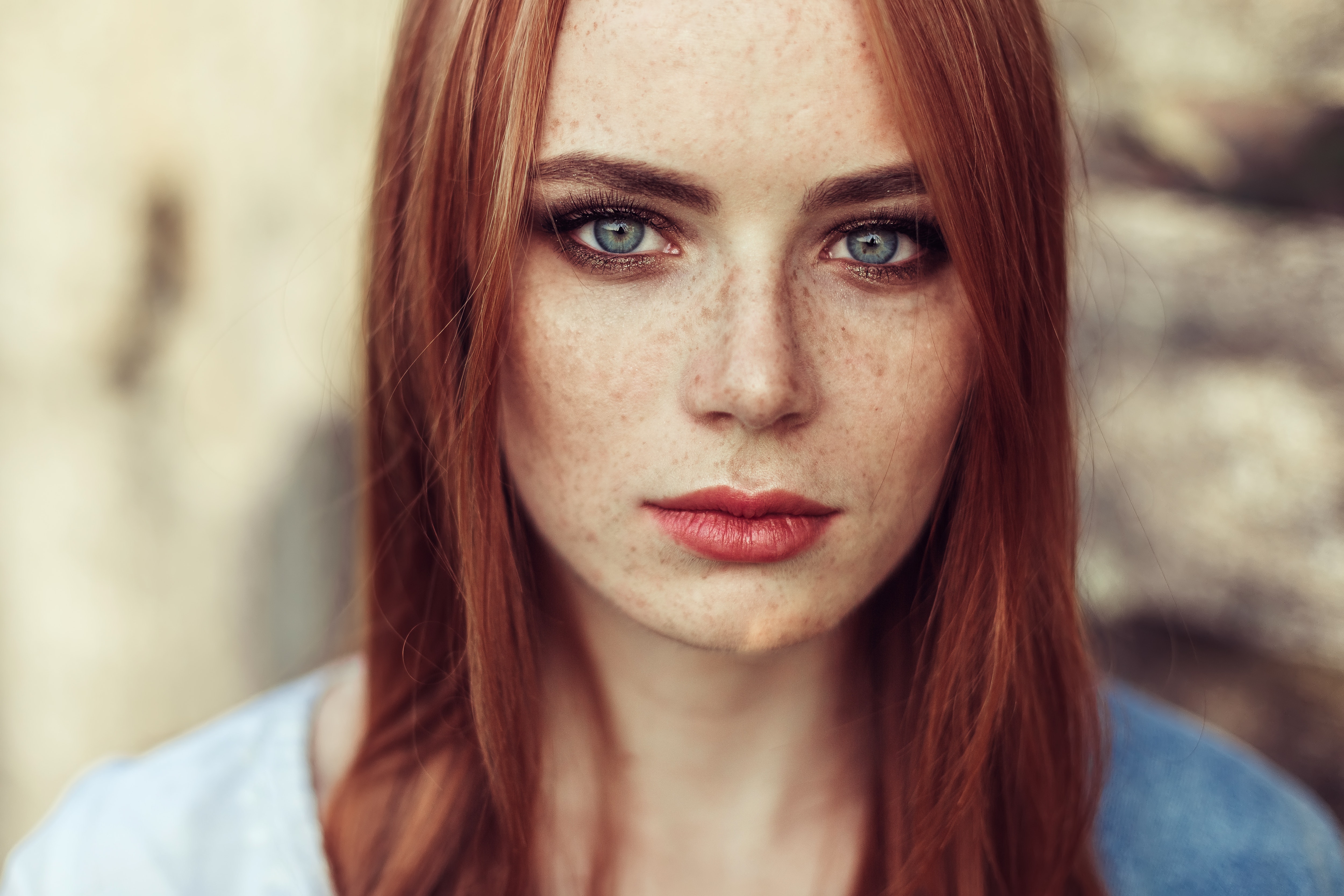 Most DNA mutations do nothing else other than cause the disease, but DNA variations may play a role in many diseases and traits. Take variations in the MC1R “red hair” gene, which not only increases the chance that your child will have red hair, but also increases their risk of skin cancer. Or variations in the OCA2 and HERC2 “eye color” genes that are also associated with the risk of various cancers, Parkinson’s and Alzheimer’s disease. To be sure, these are statistical associations, reported in the scientific literature, some may be confirmed; others may not. But the message is clear: Editing DNA variations for “desirable” traits may have adverse consequences, including many that scientists don’t know about yet.

We can see this in the analysis of He Jiankui’s gene-edited babies. By trying to make the babies resistant to HIV, He might have greatly increased susceptibility to infections by West Nile virus or influenza.

To be sure, even though complex traits such as intelligence, athletics and musicality cannot be selected or designed, there will be opportunists who will try to offer these traits, even if totally premature and unsupported by science. Like Stephen Hsu, the co-founder of Genomic Prediction who said about his offer to test embryos for polygenic risk, the risk of a disease based on multiple genes, “I think people are going to demand that. If we don’t do it, some other company will.” And also He said: “There will be someone, somewhere, who is doing this. If it’s not me, it’s someone else.” People need to be protected against this irresponsible and unethical use of DNA testing and editing.

This Casino's Microgrid Might Be the Future of Energy

GizmoCrazed - May 21, 2019 0
As the Fukushima disaster unfolded in Japan, the Blue Lake Rancheria, in Northern California, was dealing with its own crisis. Several miles inland and...

This robotic hose-dragon could jet its way into burning buildings

Three Glasses of Milk a Day Can Lead To Early Death…Wait...