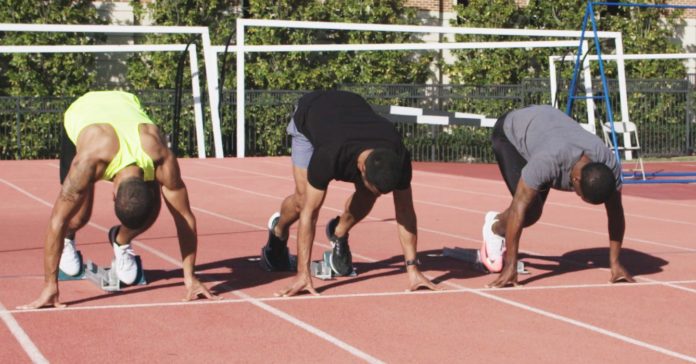 More than 130 years ago, at the first Olympic Games in Athens, Boston University law student Thomas Burke took his mark at the 100-meter dash not in a standing position, but a crouch—what was then considered an unusual starting stance.

But far more unusual, by today’s standards, was his gold-medal winning time of 12 seconds flat.

These days, talented middle schoolers post 100-meter times better than Burke’s. In March 2018, 15-year-old Briana Williams, a high school sophomore, set a world age-group record in the event with a time of 11.13 seconds. The record for boys 18-and-under is nearly a second faster still: Set in 2017 by Anthony Schwartz, the 10.15-second time would have won gold at 1980’s Summer Games.

Today, though, on the world stage, Schwartz wouldn’t even podium: In the past 30 years, only three sprinters have medaled at the Olympics with a time slower than 10 seconds. Propelled by more effective training, grippier track surfaces, faster footwear, and, yes, pharmaceuticals, competitors at every level of track and field’s premier event have steadily chipped away at the world’s best 100-meter times. Jamaican sprinter Usain Bolt holds the current world record: a sprightly 9.58 seconds.

The surprisingly persistent record progression is enough to make anyone ask: When will the fastest people on Earth cease to become any faster? And when they do, what will the fastest time ultimately be?

Depending on how you look at it, the answer to the first question could be “very soon,” or “not soon at all.” As recently as 2008, the popular perception among people who think about such things was that elite 100-meter runners were approaching the limits of possibility. Then came Bolt, who burst onto the scene at the Beijing Olympics with a record-wrecking time of 9.69 seconds—an anomalous performance, mathematicians thought, that statistical models placed two decades ahead of its time. But the following year, when Bolt broke his record by nine-hundredths of a second, he also broke, categorically, those old models. Today, revised probabilistic estimates project that his record could stand for upwards of two centuries. But who knows how that projection will measure up against reality. As applied mathematician David Sumpter has observed, Bolt singlehandedly demolished our ability to make reliable predictions about the 100-meter dash.

Which is one reason biomechanists approach the matter somewhat differently than mathematicians. They address the second question by investigating not when Bolt’s record might fall, but by how much, based on the bodies of today’s fastest sprinters.

“Once they get rolling, the force they apply becomes a motion-based mechanism, where they use their limbs to throw a punch at the ground,” says biomechanist Peter Weyand. As director of the Locomotor Performance Laboratory at Southern Methodist University in Dallas, Weyand invites many of the fastest sprinters on Earth to run in short bursts in front of high-speed, motion-tracking cameras on a bespoke, force-sensing treadmill that makes the thing you trot on at your gym look like a glorified hamster wheel.

Based on his observations, Weyand says the two biggest factors limiting the performance of elite sprinters are how much force they can apply to the ground, and how fast. At current top speeds of around 27 miles per hour, he says elite male sprinters like Usain Bolt put down roughly five times their body weight, in between .085 and 0.09 seconds.

Just for fun, I ask Weyand what kind of numbers a sprinter would need to complete the 100 meter dash in 9 seconds, on the nose. “To get to what would be required for nine flat, they would have to approach forces roughly six times their body weight, and a ground contact time of just over seven hundredths of a second,” he says. At those figures, a sprinter could, in theory, reach a maximum speed of 13.5 meters per second—a hair over 30 miles per hour. But according to Weyand, no sprinter on Earth comes anywhere close to those numbers.

That probably puts the theoretical limit for the 100 meter dash closer to 9.58 than 9.00. But Weyand, for his part, thinks athletes have plenty of room to improve. “If you put together a perfect human being, and the perfect race, I could certainly see something in the low 9.40-second range, maybe a little bit faster than that, under currently legal conditions,” he says.

Then again, who knows how those conditions could change. When Thomas Burke coiled into a crouch at the starting line for the first Olympic 100 meter dash, he did so without the speed-boosting benefits of modern nutrition, apparel, or training. He didn’t even have starting blocks. Athletes at the Olympic Games in 2120 may well scoff at the rudimentary preparations of today’s sprinters too.

iPhone Will Not Remain Safe From Malware Forever, Says Expert

GizmoCrazed - November 26, 2011 1
Fool proof security is a paradox where ever or whatever this phrase is used for and same goes for smartphones. Since the very introduction iPhone...

Atlan raises $2.5M to stop enterprises from being so bad at...