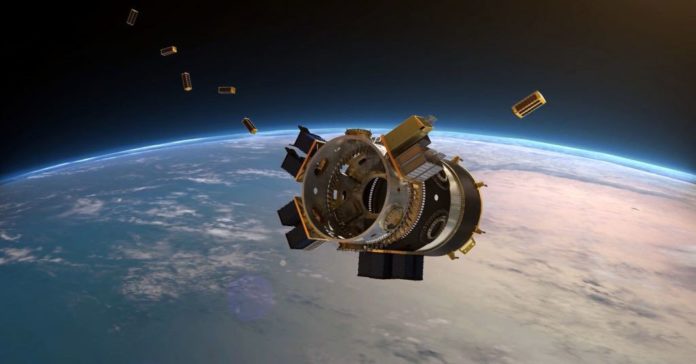 On Sunday, SpaceX plans to hoist into space the largest cosmic carpool to depart from US soil. The California-based aerospace company is flexing its ridesharing muscles in a carefully choreographed orbital ballet as its flagship rocket—the Falcon 9—prepares to launch 64 small satellites into orbit.

The mission, dubbed SSO-A, is slated to lift off a little after 10:30 am PT from the company’s west coast launch site, the second flight within a few weeks for SpaceX. What makes this flight unique is that it will deliver on a promise Elon Musk made over the summer: flying SpaceX’s souped up version of the Falcon—known as the block 5—three times. This particular booster’s maiden flight was in May, ferrying Bangladesh’s first satellite into orbit. Twelve weeks later, it flew again, lofting an Indonesian communications satellite.

For its third act, the Falcon will deposit an armada of small satellites in low-Earth orbit, including ones for Earth observation, communication, even art. The complex satellite rideshare was orchestrated by Spaceflight Industries, a company dedicated to ensuring small satellites are booked on the perfect ride to space. Smaller satellites, the kind developed by universities and research labs, have long been treated like second-class launch citizens, having to squeeze in on a resupply mission to the space station or share a ride with a larger satellite, if there’s room. As the number of satellites getting launched each year—453 last year, more than twice as many as in 2016—continues to climb, Spaceflight Industries is aiming to give the little guys more options on how to escape Earth’s surface.

Launching so many satellites at once is not easy. Each one has to deploy without hitting the rocket or one another. To address the challenge, Spaceflight built two car-sized spacecraft, dubbed the Upper Free Flyer (modeled after a part commonly used to attach payloads to the rocket) and the Lower Free Flyer (Spaceflight’s own design).

After the Falcon 9 reaches orbit, a quartet of microsatellites will separate directly from the Falcon’s upper stage, one at a time, slowly drifting away to their planned orbital parking spots. The remaining satellites will participate in their own “March of the Cubesats” as each one leaps across space, shooting out like darts from a nerf gun in a perfectly timed sequence designed to avoid potential collisions, over a five-hour period. When all travelers have been evicted, the Flyers will attempt a first: deploy drag sails to carry them down through the atmosphere where they will burn up in re-entry.

Sunday’s launch will be the second largest rideshare endeavor so far. In 2017, India launched 104 smallsats on its PSLV rocket—88 of those were for Planet, a US private imaging company. That launch was a success, but concerns remain about how to ensure the satellites don’t crash into one another and turn into a bunch of space debris. The other question is whether officials will be able to properly track the satellites after launch.

For SpaceX, resolving these issues will be key as the many-satellite launch market matures. Most rockets on the market today, like the Falcon 9 or the United Launch Alliance’s Atlas V, are far too large and expensive to send just a few tiny satellites into space. Arranging a cosmic Uberpool, as Spaceflight did, is one way to mitigate the cost. Another is through newer aerospace companies like Rocket Lab, which has developed a svelter launch vehicle specifically for small satellites.

But Rocket Lab is not SpaceX’s only competition. Virgin Orbit, a sister company to Virgin Galactic and Richard Branson’s upcoming space tourism venture, is developing a rocket called LauncherOne. It is designed to ferry satellites into low-Earth orbit using a rocket strapped to the belly of a 747. Two weeks ago, the company carried out its first captive-carry test, meaning the the plane flew with the rocket, but did not fire it. LauncherOne could carry its first payload as soon as next year. SpaceX needs this launch to be flawless to help establish itself, and not these others, as the answer to small satellite makers’ dreams.