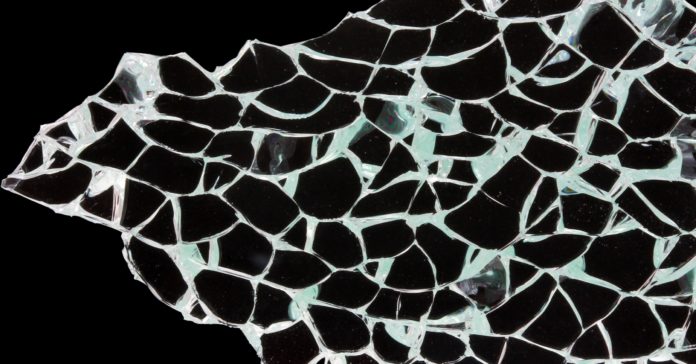 If you have a super-expensive camera that records in high speed, you should just record some stuff. Right? That’s exactly what Dan and Gav do on their YouTube channel, The Slow Mo Guys.

In their most recent video, they decided to determine the speed of breaking glass. The plan is to take a long section of flat glass and crack it on one end. After that, it’s just a matter of looking at the propagation of the crack with the high-speed camera. They also marked off 1 foot sections in the glass so that they could get some time measurements.

For their first attempt, they used a camera speed of 28,000 frames per second (I think that’s what he said). Although they didn’t find the cracking speed from this run, I am going to do it for them. Using video analysis, I can get the position of the leading edge of the crack in each frame of the video. It’s not too hard to do this. Using Tracker Video Analysis, I can set the scale of the video (using the 6 feet of visible glass) and then mark the location. Oh, don’t forget to change the frame rate in the video.

Here is the plot of the position of the leading edge of the crack as a function of time.

I should point out that I converted the distance to meters instead of feet because I’m not a barbarian (but if you are a barbarian, I’m OK with that). From this plot, you can see that we get a nice straight line. This means that the crack speed was constant—you can’t just assume that it would be. By fitting a linear function to this data I can get the speed of the crack. In this case that’s 1374 meters per second (3074 mph).

Let’s do it again. Now I will use the second clip of breaking glass (with the colored panes). In this case, they reduced the video resolution to increase the frame rate up to 78,597 frames per second. Using the same video analysis technique, I get the following plot for the position of the crack.

Notice that I get a different crack speed in this case. From this plot, the velocity of breaking glass is 732 meters per second. I think there’s a problem with my frame rate (well, it’s not MY frame rate). The recording speed doesn’t matter as much as the playback speed. The posted video plays back at 25 frames per second. But what does each frame represent in real time? If they show every frame of recorded video, it would be one divided by 78,597 seconds. I don’t think that’s what’s happening here.

Fortunately, the Slow Mo Guys show a time stamp for one of their shots. After a quick exploration (by comparing my time with their posted time) it seems I am off by a factor of 2. I suspect their playback rate is at half speed—and that’s fine (I just needed to know that). With that, I can fix my crack speed by just multiplying by 2 to get 1464 m/s. This is very close to their reported speed of 1458 m/s.

But what can we learn from this? First, it would help to have the raw video files. Second, video analysis is better than just measuring a distance and a time (but that’s fine for a quick video explanation of velocity). Finally, glass cracks REALLY FAST.

This 15 Year Old Invented A Device That Harvests Power From...

GizmoCrazed - November 3, 2015 0
Some startups have recently spent millions of bucks in order to develop huge power plants which are able to conserve energy using ocean waves....