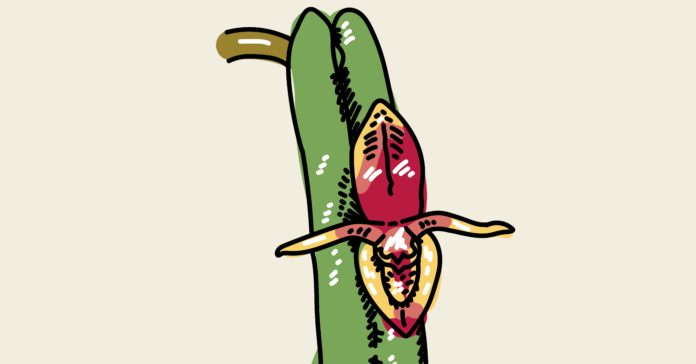 Pleurothallis portillae is one odd-looking orchid. Sporting a small nub of a flower nestled in a long, bulbous leaf that droops like a pair of string beans, it’s considered fashionably drab by collectors. But its true home is in the remote cloud forest of the Ecuadorian Andes—a region where, according to an algorithm, it’s most likely under threat of extinction.

Plants have long gotten short shrift in conservation circles. Although perhaps a fifth of the kingdom’s species are at risk, according to the UK’s Royal Botanic Gardens, Kew, identifying which ones are on the brink is a somewhat anecdotal business. Less than 10 percent of plant species have been assessed by the IUCN Red List, considered the preeminent global directory of extinction threat. Comprehensive evaluations, which take time and money, end up favoring so-called “charismatic” species, the lions and polar bears that grace glossy donation mailers. That, and the sheer number of known plant species—almost 400,000 of them, spread far across the globe in hard-to-reach places, with thousands more being discovered every year—makes the whole affair a massive, underfunded game of catch-up.

But botanists are drowning in data that could potentially help, says Anahí Espíndola, a professor of evolutionary ecology at the University of Maryland. “We wanted to find a way to speed up the process.” In a study appearing Monday in the Proceedings of the National Academy of Sciences, she and her co-authors use reams of data to predict the status of 150,000 plant species whose vulnerability is currently unknown.

Professors, curators, and citizen scientists have long gone out into the field in search of plants common and rare, returning with meticulous records of their observations that pile up in public databases. Data is available, to varying degrees, for hundreds of thousands of plants. In recent years, all that rough-and-tumble exploring has also generated millions of GPS points referring to locations where individual plants were observed. Espíndola’s team found that if they crunched the numbers available for plants already listed on the IUCN Red List—data on the species’ range, location, and traits, as well as regional climate and geographic indicators—they could build a machine learning model that could predict the status of other species.

The results indicated that between 8 and 30 percent of those unassessed plants were at risk, potentially tens of thousands of species. Even more concerning is the fact that conservation efforts might be overlooking many of those plants because of where they live. Plant protection programs tend to favor areas like Europe, where many research institutions happen to be located, or ecological marvels like Madagascar that attract hordes of botanists. Other regions, they found, like the fog-nurtured biome hugging the southern coast of the Arabian peninsula, harbored a large number of potentially threatened species that hadn’t received nearly as much attention.

IUCN ratings aren’t the end-all-be-all of conservation assessment; but they do have bearing on which areas are protected as biodiversity hotspots abroad, and are fed into databases that extractive industries use for reducing threats to endangered species as they work. “Not having plants in those analyses means that people are working with incomplete datasets,” explains Anne Frances, a botanist who coordinates Red List efforts in North America. “We’re determining key biodiversity areas without a big chunk of the biodiversity being taken into account.”

That’s especially troubling given the foundational role plants have in ecosystems. Studies have suggested plant species are less adept than animals at responding to changes in habitat and climate. And when they go extinct, their disappearance can cause cascading effects through broader ecological networks.

The challenge, Frances says, is one of time and funding. Much of the grunt work of assessing species is carried out by volunteer experts. And by necessity, current conservation strategies tend to focus on large pushes to study a single category of plant–the IUCN recently completed an inventory of the world’s cactuses, for example, and is currently working on trees–or focus on those with salient uses, like medicinal plants and the wild relatives of common food crops.

But Espíndola argues those strategies can end up shuttling resources away from plants most in need of conservation. Machine learning predictions aren’t a replacement for those on-the-ground assessments: Our humble orchid, for example, will require a closer look by botanists working in the Andes, who would tally up individuals, sum up local threats, and evaluate the genetic diversity of the wild populations. But they could be a starting point, a quick way for conservationists to identify plants that need more study. The models could also be taken up by regional conservation groups and fleshed out with more data, yielding crisper, more accurate local assessments.

Perhaps a similar model could be applied to other creatures, like fungi, kickstarting still-nascent efforts to catalogue an overlooked kingdom, says Espíndola. “There are other groups of organisms that are even less attractive than plants.”