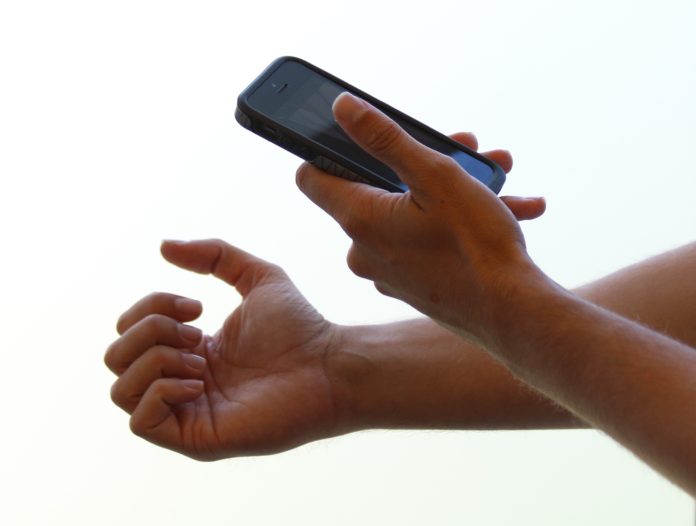 Example use of the smartphone app for noninvasive detection of anemia. (Credit: Robert Mannino)

Nearly 25 percent of the world is anemic. Now researchers have created a smartphone app that can detect the condition with a photo. The new tech could mean diagnosing and monitoring the blood disorder without a finger poke or blood draw.

“This is a way for anyone to screen themselves for anemia and all they have to do is download an app,” said Wilbur Lam, a bioengineer and pediatric hematologist at Georgia Tech and Emory University in Atlanta, who led the new research. “It doesn’t require any blood at all.”

People with anemia have low levels of hemoglobin, the molecules in red blood cells that help carry oxygen to other parts of the body. Without enough of this crucial oxygen carrier, people feel tired or weak and can sometimes become light headed or dizzy. They also appear pale. Pallor is a red flag for doctors assessing whether patients are anemic or not, but it’s not something the average person can easily distinguish. Yet everyone is at risk for anemia throughout his or her life, some more so than others.

For Robert Mannino, a graduate student in Lam’s lab, constantly monitoring hemoglobin levels is simply a fact of life.

Mannino has chronically low hemoglobin thanks to an inherited condition called thalassemia. To stay healthy, Mannino gets a blood transfusion every month. As a result, he cycles between being anemic and not anemic. Mannino is also a proficient coder, so Lam challenged him to create an app that could quantify hemoglobin levels from photos.

For the next few months, Mannino took pictures of different body parts before and after each transfusion, at which time he also gets a complete blood count. Then he developed code to analyze each pixel of every photo to find a relationship between the pictures and hemoglobin levels.

“Images that were focused on the fingernails had data that was very tightly correlated with the hemoglobin levels from his blood count,” Lam said.

Mannino then spent the rest of his graduate studies enrolling hundreds of anemia patients of different ages and ethnicities in his project. He used the patients’ blood counts and fingernail photos to refine and optimize the algorithm. Serendipitously, fingernail beds contain little pigment, making the area insensitive to skin color.

An App for Anemia

The app could detect anemia with astonishing accuracy, the researchers report today in the journal Nature Communications. The app came within 2.4 grams per deciliter of hemoglobin levels compared to complete blood count measurements and even bested physicians’ estimates during a physical exam.

As Mannino adds more data to the algorithm, the app is just getting better.

“[What] we actually published is kind of just a snapshot of its current accuracy,” said Lam, who wants to get the app into the hands of the people who need it most, like Mannino, but also pregnant women, children at risk lead for poisoning and people in low resource countries such as Kenya where cell phone infrastructure beats medical infrastructure.

“The biggest impact this can have is in the global health setting… where the current test for screening anemia is cost prohibitive or just inaccurate,” he said.