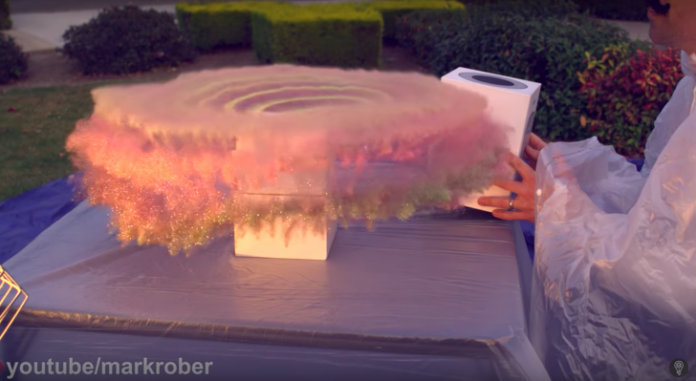 Having a package stolen off your front porch sucks. No matter what’s inside the box, it just feels… violating. Someone came into your space and took your stuff just because they could probably get away with it. And even if you go to the cops with license plates and high-res face photos, they’ll often respond with a big, apathetic shrug (particularly around Christmas when package thefts skyrocket).

After having one of his own packages nabbed, engineer/YouTuber Mark Rober decided to take things into his own hands. He built a box that… well, it’ll make any would-be thieves think twice before hitting his house again. And probably make them have to go buy a really good vacuum.

In what might be the most wonderfully over-engineered act of lighthearted retaliation to ever exist, this thing is just layer upon layer of ingenuity.

It starts with a GPS tracker that lets Mark know when the box has been moved.

As soon as it’s opened, a custom-built spinning tub flings ridiculously fine glitter in every direction, covering whoever opened it from head to toe (or, in many of the filmed cases, from car door to car door). Look for the slo-mo glittersplosion at around the four-minute mark — that alone is a work of art.

Oh, and the whole thing is being filmed (and uploaded online!) from basically every angle, thanks to a very carefully aligned rig of four hidden cameras.

And there’s more! I don’t want to spoil it, but everything down to the tiny details of the box itself were planned out to make thieves feel a little bit more silly after the glitter settles.

Now, this probably isn’t something you should try at home. Building packages that use hidden switches and circuit boards to do unexpected things when you open them seems like something that can land you on a list. But holy wow, watching it is therapeutic.

Want to go deeper? His co-builder on this project, Sean Hodgins, has a tear down video about the engineering involved.

GizmoCrazed - July 25, 2011 1
Tired of accessing Facebook using browser on your iPad ? We have found a way to get rid of it. In the recent Facebook iPhone app...