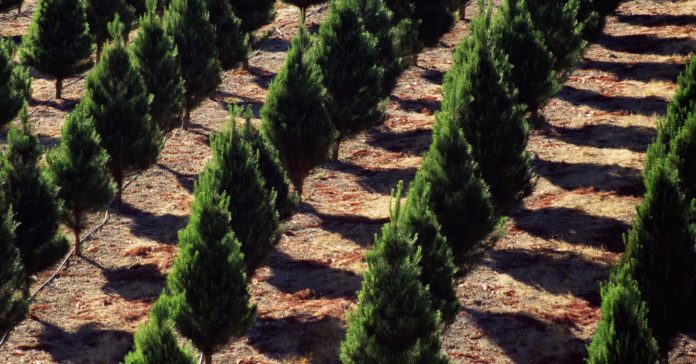 Every winter, millions of Americans descend on farms and lots across the country with the express purpose of inspecting, and ultimately choosing from, their local selection of coniferous evergreen trees. I’m talking, of course, about Christmas tree shopping—the widely practiced pastime of publicly scrutinizing spruces, pines, and firs in search of the ideal yuletide centerpiece.

Many people are practiced at picking the perfect tree. They’ll judge on things like color, size, shape, needle quality, and bushiness. But behind the annual selection of a coniferous house guest—some 30 million of them a year, in the US—is a ton of science.

To Bert Cregg, identifying exactly what makes a tree perfect is more than a holiday tradition, it’s a major part of his job. He’s a forest researcher at Michigan State University and a renowned expert on Christmas tree production. His work covers two main areas: genetics and culture techniques. “Basically, how can we identify species and seed sources that are going to lead to better Christmas trees, and how can growers manage their farms to produce better trees,” he says.

The research Cregg and his colleagues are conducting today will likely influence what type of Christmas tree you buy from your local lot a decade from now.

Consider Cregg’s cold-hardiness experiments, one of which he’s currently performing inside a chest freezer in the basement of MSU’s Plant and Soil Sciences Building. “We collect a bunch of shoots from the trees we want to study, stick them in the freezer, and program it to decrease 3 degrees Celsius every hour,” Cregg says. Every 60 minutes, he and his team retrieve some shoots—at minus 3, minus 6, minus 9, minus 12—until the freezer reaches minus 45 degrees Celsius, which is as cold as it goes. Then they incubate the samples.

A week later, they inspect the shoots to see which ones have begun to brown—a sign of damage—and at what temperature. The thinking goes that the colder a given species of tree can get before browning, the more resilient it will be in frigid climates. And the more resilient a tree is, the more likely it is to endure multiple winters and still come out looking living-room ready. “So, if we’re thinking of selecting a new species or seed source, we can screen [that species] rapidly, rather than waiting for that 1-in-20 winter to determine if a tree is hardy enough for a given location,” Cregg says.

Hardiness is but one of many coniferous characteristics Cregg studies in pursuit of increasingly perfect Christmas trees. There’s also size and color, for starters. Farmers see to both by fertilizing often; regular mulches keep trees verdant and growing at a rate of roughly one foot per year. But historically, growers overdid it. Old guidelines prescribed around 300 pounds of nitrogen fertilizer per acre—way more than the trees needed. Microbes in the soil would convert the excess nitrogen into nitrate, which would work its way past the tree’s roots, deep into the soil, and infiltrate the ground water. Cregg’s lab showed that farmers could reduce their fertilizer requirements by two-thirds if they applied it on a per-tree basis, according to the size, species, and age of their trees. The result was greener trees, less nitrogen runoff, and more money in farmers’ pockets.

There’s also things like needle retention—literally, how many needles stay stuck to the branch, and how many rain down on the presents underneath? Cregg and his colleagues assess this by plucking sprigs from a variety of fir species and displaying them in rows at a horticultural farm on campus. Once a week, a researcher will swing through, give each sprig a gentle tug along its length, and tally how many needles fall off. “We simply go through, give a pull, and we have a rating scale based on how many needles drop,” Cregg says. “We can display a Fraser fir for six weeks, and it won’t drop any needles. Noble fir, same thing. And that’s one reason people in the Northwest like noble firs.”

And then there are issues like coning, and how to deal with it. Coning as in pinecones, which, in this context, are a bad thing. “Anybody on the outside looking in would probably say: Why’s that an issue?” Cregg says. “I get it. It’s a little out there. But cones are probably the single biggest problem our growers face here in the Midwest.”

Take Fraser firs, for example. It’s the tree of choice for farmers in Michigan and North Carolina, the country’s third- and second-biggest growers of Christmas trees, respectively, behind Oregon. In nature, most firs don’t produce cones until they’re 15 years old, but on farms—most of which harvest trees no later than their tenth season—they’ll appear after only a few years. They bud in the spring and develop through the summer, robbing the trees of resources. (From an evolutionary perspective, reproduction comes first, so the trees sink their energy into producing cones.) But the cones don’t stick around. Come fall they disintegrate, showering the tree in unsightly fragments.

So in the springtime, growers pick the cones. By hand. It’s not difficult, exactly; if you time it right, a bud the size of your little finger will pop right off, with a twist. But it takes forever: An individual tree can carry hundreds of cones. On a big one you might pluck a thousand. With millions of firs growing across the US, and most of them experiencing some kind of coning, we’re talking about billions of cones.

Cregg thinks plant growth regulators, which nerf the cone-promoting hormone in firs, could help curb the problem. For the past few years, he’s been working to identify the ideal regulator, and how best to apply it. His latest approach isn’t perfect, he says, but it can reduce coning by about half. It also has the desirable side effect of keeping trees nice and dense. The main hangup: Applying growth regulators doesn’t yet make financial sense. “Biologically it works, but it’s not quite to the point of being cost effective,” Cregg says.

Perhaps the most ambitious Christmas tree science happening today is a multi-institutional endeavor called CoFirGE. Short for Collaborative Fir Germplasm Evaluation Project, CoFirGE is a nationwide effort whose goals include identifying new species of fir for Christmas trees. There are between 30 and 40 species of firs worldwide, a small handful of which are currently grown for the North American Christmas tree market. Two of today’s most popular trees—the Fraser and noble fir—both struggle with a condition called root rot. Caused by the water-mold genus Phytophthora, a tree stricken with it can die in a matter of days. It’s currently a huge problem in America’s biggest tree-growing states, but in Turkey, fir trees are resistant to root rot. So today, through the CoFirGE project, there are species of Turkish fir growing in Michigan, Pennsylvania, Connecticut, North Carolina, Washington, and Oregon, to see how adaptable they are to US climates.

All things to keep in mind, the next time you find yourself wandering the rows of evergreens at your local lot. Remember: Long before you arrived to judge the local stock on things like color, shape, and freshness, scientists like Cregg were stashing firs in freezers and pulling at pine needles, all in pursuit of a more perfect Christmas tree.