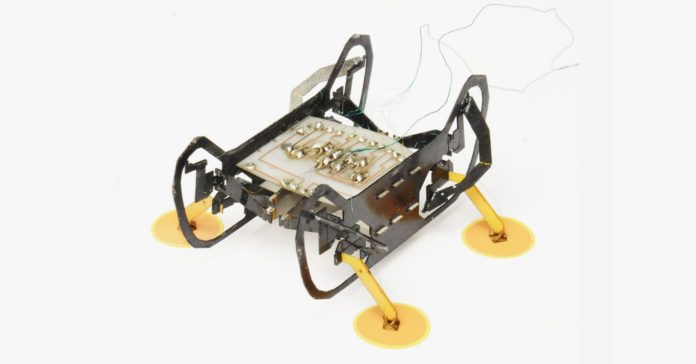 A bug’s life doesn’t seem half bad, if you can overlook the super-short lifespan or the threat of getting eaten by lizards or swatted at by humans. Flying is nice, as is being able to walk on ceilings. The versatility is enviable, which is why roboticists are on a quest to imbue machines with the power of the bug.

But to harness the powers of nature, roboticists are resorting to very un-biological means. The latest insect-inspired robot tackles the problem of walking upside down using not glue, or a material that mimics the pad of a gecko’s foot as past bot builders have done, but electricity. Specifically, electroadhesion.

The robot is an upgrade to an existing insect-inspired machine known as the Harvard Ambulatory MicroRobot, or HAMR. HAMR is a tiny little four-legged thing (a departure from insects, which have six legs), at just 1.5 grams and 1.75 inches long. On the ground, it can skitter rapidly with a gait similar to a trot, its diagonally opposite legs moving in sync.

While hanging upside down, though, this gait won’t cut it. So researchers at Harvard’s Wyss Institute gave it a slower gait called a tripedal crawl, in which three legs remain in contact with the surface, while one leg lifts and moves forward at a time. “The idea is with three legs on the ground, it’s always statically stable,” says Wyss roboticist Neel Doshi, coauthor on a Science Robotics paper describing HAMR’s new power.

About that static: Think of the robot as sticking to the surface like a magnet, only the forces here are electric. In the pad of each foot is a thin layer of copper, to which a wire provides voltage to create a positive charge. Then the researchers ground the surface they want to walk on, creating a negative charge there. The positive and negative charges interact, generating an attractive force that sticks the robot to the surface, allowing it to hang inverted.

To get the robot to walk, the researchers keep voltage flowing to three legs, creating an attractive force, then cut off voltage to one leg, which allows it to detach and move forward. And then the next leg, and the next, one by one, to move the robot forward. It’s much slower than a trot on the ground, but static stability demands a deliberate pace.

But forces get weird when you’re hanging upside down. When the robot pulls a front leg up, for instance, that creates a kind of backwards pitch. So the researchers deployed a strategy called “reach and push”: If the front left leg lifts to move, the back right leg pushes to counteract.

“Without this reach and push, we were able to go for less than five steps,” says Doshi. Some kind of disturbance, perhaps unevenness in the surface or the robot’s tether tugging on it in a weird way, would inevitably throw the robot off its course. “With these two parameters tuned appropriately, we’re able to walk for 80, 90 steps without random perturbations taking it off.”

So why would you need an insect-like robot to walk upside down? The specific application these researchers had in mind is inspecting jet engines, a limited field. But that’s the shortcoming of an electrically powered approach. An engine is a good environment because its metal surface can serve as a ground, but only a handful of other industrial settings are likely to fit the bill.

The beauty of HAMR, however, is its ability to traverse a wide range of environments, by robot standards at least. Even with the addition of the electroadhesive pads, it can still run on the ground. And while there are other electroadhesive robots out there, HAMR is unique in that it’s both very small and very legged. If you want a robot to act like an insect in a certain environment, four legs could be an advantage over, say, tank tracks.

“The ability to ambulate on a number of surfaces greatly extends the utility of HAMR platform,” says Matt Estrada, who studies wasp-inspired robots at Stanford, but who wasn’t involved in this work. “Part of its unique utility comes from the small spaces it can fit into but this inherently carries a penalty—most obstacles appear very big when your robot is small. Being able to ambulate beyond horizontal surfaces is a big step to alleviate this problem.”

The next step is getting HAMR to go inverted without a tether providing power. That’ll of course take the addition of a battery, but Doshi says the pads already create enough adhesion force to support the extra weight.

So perhaps one day you’ll fly in a plane whose engines once crawled with electroadhesive insect-inspired inspectors. Now if the machines could only do something about that food…

GizmoCrazed - October 27, 2017 0
Nissan’s latest electric vehicle concept aims for crossover appeal, with a design that goes well beyond the Nissan Leaf in terms of aggressive styling...

Aquaman Trailer: The Physics of His Leap from the Water