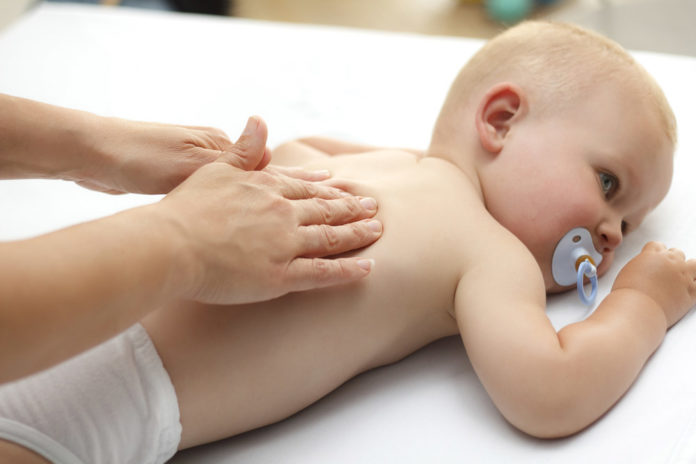 Stroking a baby before a medical procedure really can reduce the infant’s pain. (Credit: Natallia Ramanouskaya/shutterstock)

Protecting an infant from pain may be a matter of instinct. In a new study, researchers show that gently stroking babies during medical procedures, as parents intuitively do, reduces infants’ feelings of pain about as well as applying a topical anesthetic. The discovery suggests touch and tactile stimulation are effective means to mollify pain in newborns and an alternative to using drugs.

“Touch seems to have analgesic potential without the risk of side effects,” Rebeccah Slater, a pediatric neuroscientist at the University of Oxford in the United Kingdom, who led the new research, said in a statement.

Touch has the power to sooth, especially skin-to-skin contact. Gentle and slow stroking of hairy skin activates a class of sensory nerves called C fibers. In adults, stimulating these fibers not only feels good, but also alleviates pain. Slater and her colleagues wondered if the same might be true for infants.

The researchers observed two- to five-day old infants as they were poked and prodded for medical tests. The babies received pinpricks and lances to collect blood from their heels. The team measured the newborns’ brain activity with electroencephalography, a technique that records electrical activity on the surface of the brain, during the procedures.

Right before the tests, researchers brushed the infants at about an inch per second (the optimal speed to activate the C fibers) or a speed about 10 times faster.

Compared to infants that were not touched before receiving pinpricks, brain activity in response to pain decreased 60 percent in the infants stroked at the optimal rate, Slater and colleagues report today in the journal Current Biology. Stroking babies at the faster rate did not have this effect. The team saw a similar outcome when lancing the babies’ heels to collect blood.

“Parents intuitively stroke their babies at this optimal velocity,” Slater said. “If we can better understand the neurobiological underpinnings of [touch] techniques like infant massage, we can improve the advice we give to parents on how to comfort their babies.”

Slater and colleagues also watched the babies’ faces before the heel lancing procedure. They found all the babies grimaced when lanced, but babies that were not touched grimaced for almost 50 percent longer than babies that received caresses.

The findings suggest tactile stimulation can reduce pain in infants and could facilitate pain management care for newborns.

GizmoCrazed - March 20, 2019 0
Humanity just can’t make up its mind about cannabis. For thousands of years, humans have used the stuff as medicine or to travel on...

How Technology Will Change the Consumer-Business Relationship