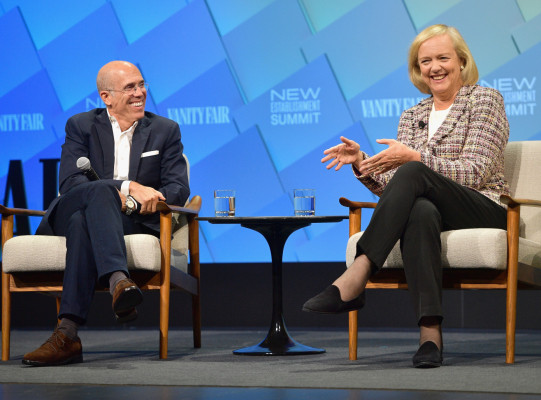 Video won’t start rolling on Meg Whitman and Jeffrey Katzenberg’s new bite-sized streaming service with the billion-dollar backing until the end of 2019, but talent keeps signing up to come along for their ride into the future of serialization.

The latest marquee director to sign on the dotted line with Quibi is Catherine Hardwicke, who will be helming a story around the creation of an artificial intelligence with the working title “How They Made Her,” according to an announcement from Katzenberg onstage at the Variety Innovate summit.

Hardwicke, who directed “Thirteen,” “Lords of Dogtown” and, most famously, “Twilight,” is joining Antoine Fuqua, Guillermo del Toro, Sam Raimi and Lena Waithe in an attempt to answer the question of whether Whitman and Katzenberg’s gamble on premium (up to $6 million per episode) short-form storytelling is a quixotic quest or a quintessential viewing experience for a new generation of media consumers.

Katzenberg also revealed in a LinkedIn post that Quibi would be working on a basketball-related series with Steph Curry’s production company. He wrote:

I announced a new docu-series by Whistle called “Benedict Men” coming exclusively to Quibi. “Benedict Men” will be executive produced by Stephen Curry’s Unanimous Media and will give viewers an inside look at one of the most unique high school basketball teams in America at St. Benedict’s Prep in Newark, New Jersey.

St. Benedict’s Prep is an all-boys secondary school founded on the core belief ‘What Hurts My Brother Hurts Me,’ and aims to foster a legacy of strong character, community, leadership, and faith. As one of the top athletic high schools with a storied basketball program and the highest graduation rate in New Jersey, the series will follow the brotherhood of young men who seek to balance life in complicated surroundings.

In some ways, the big adventure backed by Katzenberg, the former chairman of Walt Disney Studios and founder of WndrCo, and every major Hollywood studio — including Disney, 21st Century Fox, Entertainment One, NBCUniversal, Sony Pictures Entertainment and Alibaba Goldman Sachs — is the latest in an everything old is new again refrain.

Again and again, Whitman and Katzenberg returned to an analogy from the early days of the cable revolution. “We’re not short form, we’re Quibi,” said Whitman, echoing the tagline that HBO made famous in its early advertising blitzes. That Whitman and Katzenberg’s project to take what HBO did for premium television and apply that to mobile media is ambitious. Now industry-watchers will have to wait until 2019 at the earliest to see if it’s also successful.

In the interview onstage at a Variety event on artificial intelligence in media, Katzenberg cited Dan Brown’s “The Da Vinci Code” as something of an inspiration — noting that the book had more than 100 chapters for its 500 pages of text. But Katzenberg could have gone back even further to the days of Dickens and his serialized entertainments.

And right now for the entertainment business it really is the best of times and the worst of times. Traditional Hollywood studios are seeing new players like Netflix, Amazon, Apple and others all trying to drink their milkshake. And, for the most part, these studios and their new telecom owners are woefully ill-equipped to fight these big technology platforms at their own game.

Taking the long view of entertainment history, Katzenberg is hoping to win networks with not just a new skin for the old ceremony of watching entertainment but with a throwback to old style deal-making. The term serialization here takes on greater meaning.

Quibi is offering its production partners a sweetheart deal. After seven years the production company behind the Quibi shows will own their intellectual property, and after two years those producers will be able to repackage the Quibi content back into long-form series and pitch them for distribution to other platforms. Not only that, but Quibi is fronting the money for over 100 percent of the production.

Katzenberg said that it “will create the most powerful syndicated marketplace” Hollywood has seen in decades. It’s a sort of anti-Netflix model where Katzenberg and Whitman view Quibi as a platform where creators and talent will want to come. “We are betting on the success of the platform — and by the way, it worked brilliantly in the ’60s and ’70s and ’80s.” Katzenberg said. “Hundreds of TV shows were tremendous successes and [like the networks then] we don’t want to compete with our suppliers.”

In addition to the business model innovations (or throwbacks, depending on how one looks at it), Quibi is being built from the ground up with a technology stack that will leverage new technologies like 5G broadband, and big data and analytics, according to Whitman.

Indeed, launching the first platform built without an existing stable of content means that Quibi is preparing 5,000 unique pieces of content to go up when it pulls the curtains back on its service in late 2019 or early 2020, Whitman said.

And the company is looking to big telecommunications companies like Verizon (my corporate overlord’s corporate overlord) and AT&T as partners to help it get to market. Since those networks need something to do with all the 5G capacity they’re building out, high-quality streaming content that’s replete with meta-tags to monitor and manage how an audience is spending their time is a compelling proposition.

“We want to work to have video that looks good on mobile [and] ramp up content in terms of quantity and quality,” Whitman said. That quality extends to things like the user interface, search features and analytics.

“We have to have a different search and find metaphor,” Whitman said. “It takes eight minutes to find what you’re looking for on Netflix… We will be able to instrument this with data on what people are watching and using that in our recommendation engine.”

Questions remain about the service’s viability. Like what role will the telcos actually play in distribution and development? Can Quibi avoid the Hulu problem where the various investors are able to overcome their own entrenched interests to work for the viability of the platform? And do consumers even want a premium experience on mobile given the new kinds of stars that are made through the immediacy and accessibility that technology platforms like YouTube, Instagram and Snap offer?

“Where the fish are today is a phenomenal environment,” Katzenberg said of the current short-form content market. “But it is an ocean. We need to find a place where there are these premium services.”