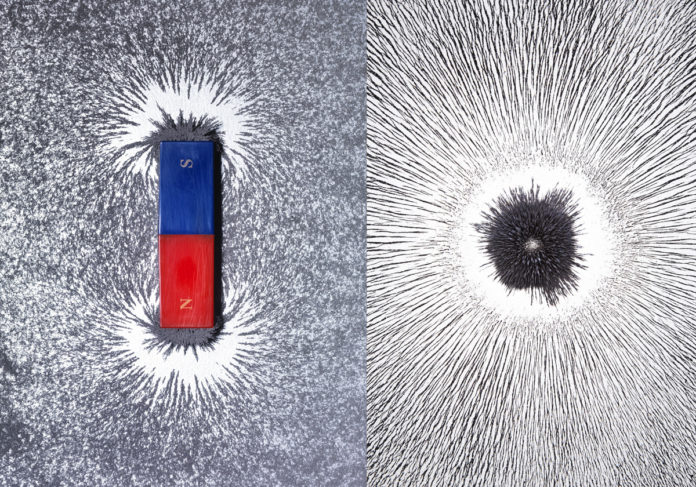 Fast-moving monopoles likewise pump out this light, and so do the comparatively massive, slowpoke monopoles — but for a different reason. These monopoles, borne of the early Grand Unified era of the Big Bang when three of the fundamental forces were joined as one, would possess a vestige of the extreme energy density where the differences between Standard Model particles and forces disappear. “The Grand Unified monopole contains in its tiny heart a little bit of the Big Bang, when all the forces were equal,” says Pinfold. When a proton in ice is exposed to this core of a monopole, where elementary particles’ differences disappear, the proton decays, with its constituent quarks transforming into other particle types including positrons, which can generate detectable Cherenkov light.

As of 2015, when they issued their most recent major report on the topic, researchers hadn’t found any monopoles with IceCube, based on two years’ worth of data. But again, patiently waiting could yet pay off.

If magnetic monopoles ever do show up in Earth’s vicinity, or the detritus of particle collisions, we will know it. And should someone, somewhere, indeed manage to unambiguously nab one of the little rascals, then the real fun begins. Wrangling monopoles could be easy, bending the particles to our will just by applying common electromagnetic fields. Monopoles might flow as magnetic, instead of electric currents, paving the way for “magnetronic” technologies involving “magnetricity,” perhaps in ultra-compact data storage or totally reimagined computer architectures.

As for science experiments, working with a new particle could finally deliver on those Grand Unified Theories and even theories of everything. Getting to that new realm of physics would likely require the brute thrill of smashing monopoles’ heads together. “If we can find them,” Rajantie says, “ultimately what we particle physicists would like to do is have a collider where we collide monopoles with other things and see what comes out.” Who knows, maybe the LHC could give way to an LMC — a Large Monopole Collider.

And finally, Pinfold and those like him who have wondered why magnets cannot splice into solitary north or south poles would have an answer.

“The magnetic monopole runs through the development of modern theories of the universe like a golden thread,” says Pinfold. “If we do see something, it will be a very big deal.”