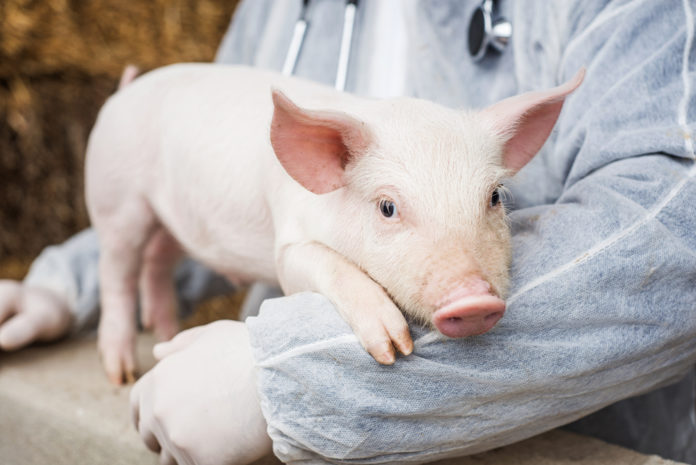 Scientists say they have successfully kept a baboon alive with a pig’s heart for six months. (Credit: Dusan Petkovik/Shutterstock)

Because demand for organs outpaces supply and probably always will, researchers have looked to xenotransplantation — placing animal organs into human bodies — as an alternative. However, getting to the point where xenotransplantation is safe enough for trials in humans has been a challenge because so many complications can occur. Now, a breakthrough by a group of researchers brings us one step closer to a day when organ shortages are a thing of the past.

A research team led by Bruno Reichart at the University of Munich in Germany has developed a technique allowing baboons to survive significantly longer than ever before with transplanted pig hearts. Figuring out how to safely xenotransplant hearts is an important area of study because of skyrocketing rates of heart problems, the researchers said.

“Heart failure in the United States is expected to reach more than eight million by 2030, and many of these people will die while waiting for a donor organ,” wrote Christoph Knosalla of the German Heart Center in a commentary published alongside the team’s research paper in Nature this week.

Despite 25 years of extensive study, the longest a baboon had survived after receiving a pig heart was 57 days. However, the researchers demonstrated it’s possible for a baboon to survive six months by modifying the typical heart transplantation protocol and using gene editing technology.

Researchers refined the transplantation protocol over the course of three trials involving 16 baboons. Baboons received hearts from pigs that were genetically edited to reduce interspecies immune reactions and to prevent excessive blood clotting after surgery.

In the first trial, they learned that using an ice-cold storage solution, which is the typical method of organ storage prior to transplant procedures, can cause tissue damage once blood is recirculated through the heart. To prevent organ failure, they intermittently pumped an oxygenated, blood-based solution containing nutrients and hormones kept at 46 degrees Fahrenheit through the heart.

In the second trial, they aimed to solve the problem of heart overgrowth common in pig-to-baboon transplants. Although pig hearts are very similar to human and primate hearts, they are much bigger and are prone to complications arising from interspecies hormonal and blood pressure differences. Transplanted hearts that continue to grow to a size bigger than what the recipient’s body can support may damage nearby organs and cause death.

To prevent this from happening, researchers gave the baboons medication to reduce their blood pressure to levels found in pigs. Additionally, they gave the primates temsirolimus — a drug that prevents heart overgrowth. Finally, they modified the typical course of cortisone treatment to combat immunosuppression in transplant patients. Because cortisone can cause heart overgrowth, they tapered the treatments much earlier than usual.

Although much more study is needed before researchers can begin xenotransplantation trials in humans, Reichart is optimistic it’s on the horizon.

“I think the technical expectations are solved, but we must produce more consistent results,” Reichart said. “We need additional experiments and achievements. On top of our funding by the German Research Foundation, we would need at least one private investor. Taken together, three years would be enough.”

In the short term, the researchers said the techniques used in the study could improve human-to-human transplant procedures. Additionally, the discovery that pumping oxygenated blood and nutrients through stored hearts could increase the availability of donor hearts by preserving those that aren’t able to withstand a lack of normal blood supply because of age or an underlying condition.

GizmoCrazed - September 6, 2016
0
NASA has awarded a contract to Alphaport, Inc., of Cleveland, for safety and mission assurance support services at its Kennedy Space Center in Florida,...

Nanotechnology in Hydrophobic coatings protects your car both inside and out

Vegetarian Diets Use Half As Much Water

Why do the little things in life never last as long...