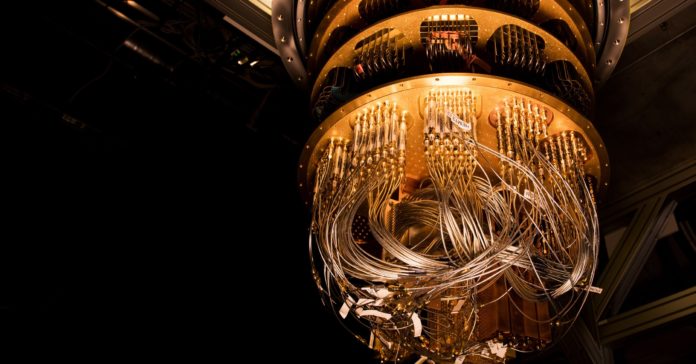 Since 2016, IBM has offered online access to a quantum computer. Anyone can log in and execute commands on a 5-qubit or 14-qubit machine located in Yorktown Heights, New York, from the comfort of their own home. This month, I finally tried it—nervously. I did not know what I was doing and worried I might break the hardware. “You won’t mess anything up,” IBM physicist James Wootton assured me via Skype.

I chose the 5-qubit machine. The online interface resembles a musical score consisting of five horizontal lines, one line corresponding to each quantum bit, or qubit. Qubits, the basic building block of a quantum computer, are pieces of hardware that represent numbers, just like the transistors in your computer—except they obey the bizarre laws of quantum mechanics. Designs vary, but IBM’s qubits consist of tiny circuits made of superconducting wire, kept in a refrigerator very close to absolute zero. The circuits can only hold information at low temperatures.

The potential of quantum computing lies in the weird behavior of these tiny circuits. If a transistor was a Lego, a qubit would be a blob of slime: the two components follow completely different rules, and can be used to build entirely different structures. For example, the circuits can be programmed into a delicate quantum state known as a superposition, where they are equal to neither 1 nor 0, but some combination of the two. Qubits offer a fluidity inaccessible to ordinary computers, which box the world in binary. Researchers are excited about this new capability—but don’t quite know how to take advantage of it yet.

As the conductor of my quantum orchestra, I decided what each little superconducting circuit did by dragging brightly colored icons representing commands onto its corresponding line at random. I clicked “Run.” The computer in New York obeyed, applying a cacophony of microwave pulses to the qubits to change their values. After about a minute, IBM sent me an automated email with my computation results. I examined the final value. Four qubits equaled 0, while a fifth one hovered in a superposition state that was 98 percent equal to 0, and 2 percent equal to 1.

“Of course, running something comprehensible requires you to read the user guide,” Wootton had told me.

It’ll take more than that. But the app, dubbed “The IBM Q Experience,” has already executed more than seven million quantum programs, and they aren’t just random gobbledygook like mine. Legit researchers, many unaffiliated with IBM, have published more than 120 academic papers using it.

The app is part of a larger effort to boost literacy in quantum computing. Other companies have also been releasing open-source software packages to reach out to the masses—or more probably, nerds with niche interests. They hope that a diverse pool of users can guide them toward more creative uses for the machines. “Anyone who is an enthusiast can play with these tools,” says physicist Nathan Killoran of Xanadu, a quantum computing startup based in Toronto. This November, Xanadu released an open source library called PennyLane that is compatible with IBM’s hardware. “The more people get into it, the quicker ideas can develop,” says Killoran. “And I think the best way to do that is to crowdsource the ideas.”

There’s a learning curve, for sure. The packages, predominantly written in Python, strive to make the software as user-friendly as possible with detailed tutorials and interactive apps. But to really exploit the computer’s quantum-ness, you have to develop an intuition about how qubits flow in and out of superposition and interact with each other via bizarre properties known as entanglement. “We try to ease the transition as much as possible,” says Killoran. “But at some stage, people do have to learn a little bit about the quantum side of things.” Users need some specialized technical knowledge, much like the twentieth-century operators of vacuum tube computers did.

Still, by letting everybody in, researchers are hoping that somebody will finally crack the mystery of quantum computing. Because despite the hype—it’ll break modern cryptography! It’ll design super-efficient batteries! It’ll reinvent the fertilizer business!—quantum computing’s advantages over conventional computing are still purely theoretical. The industry’s reach goals require powerful hardware made of millions of error-free qubits that will require a few decades to develop. So far the biggest device, announced Tuesday by Maryland-based startup IonQ, purportedly contains 160 error-prone qubits.

But researchers think these angsty teenage devices still have potential. Google, for example, has a 72-qubit quantum computer that it plans to make available to outside researchers. One of its projects is to promote the use of its computer in drug discovery and materials design, says Google chemist Jarrod McClean. To that end, the company released a software package this year called OpenFermion. Experts think that quantum computers should be able to simulate chemistry more accurately than conventional computers, since electrons, atoms, and molecules obey the same quantum laws of superposition as qubits.

Companies also want artificial intelligence experts to start using their computers. Quantum computing researchers suspect, though they don’t know for sure, that their new devices could speed up machine learning algorithms or improve their accuracy. Because quantum computers obey different mathematical rules, they should be able to identify different patterns in data sets, says physicist Maria Schuld of Xanadu. Last month Xanadu released PennyLane, a software package meant to make it easier to run machine learning algorithms on a quantum computer.

Software packages like Xanadu’s and Google’s are compatible with multiple quantum computing architectures. That’s because it’s still unclear which company’s hardware will reign supreme, says Google physicist Dave Bacon. Google and IBM both use qubits made of superconducting circuits; IonQ’s computer is made of single ions placed on a chip; Xanadu is trying to make qubits out of individual photons of light. Quantum software developers have had to remain open-minded about rival companies’ hardware.

To encourage people to use the code, IBM and Xanadu also run contests for the best projects that use their tools. What are they looking for? They’re not picky: Xanadu’s contest is offering $1000 for “[a]lmost anything,” they wrote in a publicity post. They do highlight one particular area of need: communications projects that explain what quantum computing is.

GizmoCrazed - April 30, 2019 0
SpaceX has received Federal Communications Commission approval to halve the orbital altitude of more than 1,500 planned broadband satellites in order to lower the...

The Robots That Teach Each Other

Here’s How You Can Turn Used Plastic Bottles Into Plastic Wire...