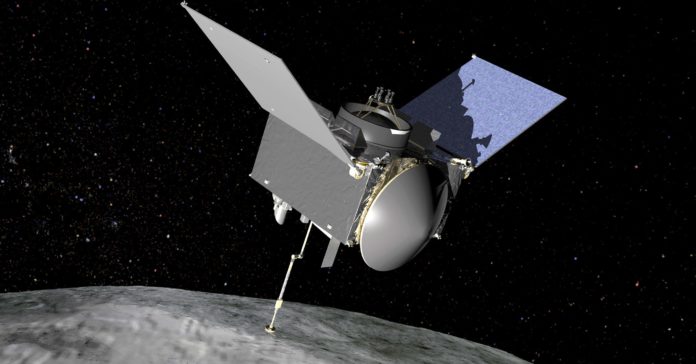 Two years and two months after it launched from Cape Canaveral Air Force Station, NASA’s $800-million mission to the asteroid belt between Mars and Jupiter will reach a pivotal moment Monday, when the agency’s OSIRIS-REx spacecraft is slated to rendezvous with its scientific target: a dark, round, carbon-rich asteroid named Bennu.

At fewer than 500 meters in diameter, Bennu is a small solar-system body with big scientific potential: Astronomers suspect the asteroid’s rocky composition has remained more or less unchanged since it formed some 4.5 billion years ago. Collecting and analyzing a sample of the asteroid could tell scientists a lot about the origins of our solar system, its planets, and the source of organic molecules that may have given rise to life on Earth.

But before anyone can sift through a sample from Bennu, NASA must first collect and retrieve it. Doing so will require several major steps, the first of which is slated to kick off Monday, at around 9:00 am PT, when OSIRIS-REx (short for Origins, Spectral Interpretation, Resource Identification, Security-Regolith Explorer) will arrive at Bennu and begin its months-long process of surveying the asteroid’s surface. You can watch the arrival on NASA TV (above), where the agency will be broadcasting live from mission control between 11:45 am and 12:15 pm ET. NASA will also air an arrival preview program beginning at 11:15 am ET.

After arriving at Bennu, OSIRIS-REx will spend several weeks maneuvering around the asteroid, collecting data on its mass, topography, and composition. The spacecraft will begin its survey at a remove of roughly 12 miles, and culminate in a series of low-pass flyovers some 800 feet above the asteroid’s surface before entering the asteroid’s orbit on New Years’ Eve. If NASA is successful, Bennu will become the smallest object the agency has ever orbited.

The goal at that point will be to identify a safe and scientifically promising sample site. Notice we said “sample” site—not “landing” site. OSIRIS-REx will never actually touch down on the asteroid’s surface. Instead, in a series of maneuvers currently slated for mid-2020, the spacecraft will swoop toward the surface, hovering just close enough to collect a sample of Bennu’s surface with its 10-foot-long robotic arm. OSIRIS-REx’s mission planners aim to obtain a sample of at least 2 ounces, though the spacecraft is designed to accommodate as many as 4.4 pounds of space dust. Either way, it’ll be the largest such sample NASA has collected since the Apollo missions in the 1970s.

Assuming all has gone well up to that point, OSIRIS-REx will depart Bennu in the spring of 2021 to begin its two-and-a-half-year journey back to Earth. But we’re getting ahead of ourselves: Before OSIRIS-REx sets out on the return leg of its trip, it’ll first have to dance with Bennu for a couple of years. That dance begins today.

GizmoCrazed - December 29, 2017 0
This year, for the first time in my life, I’ll be hosting my family for the holidays. And to their deep disgruntlement, we’ll be...

More Than 6 Million Firefox 4 Downloads Made In First 24...