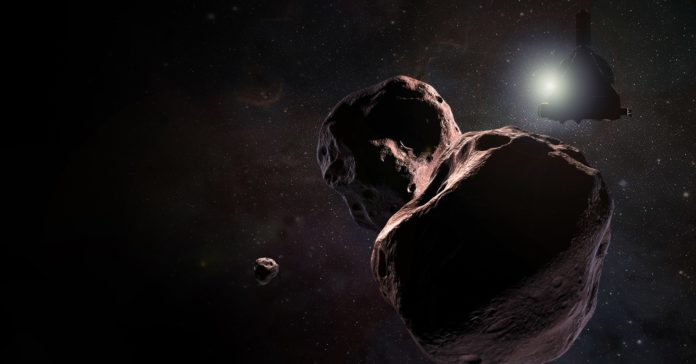 Way, way out at the cold, dark edges of the solar system—past the rocky inner planets, beyond the gas giants, a billion miles more remote than Pluto—drifts a tiny frozen world so mysterious, scientists still aren’t entirely sure if it’s one world or two.

Astronomers call it Ultima Thule, an old cartography term meaning “beyond the known world.” Its name is a reference to its location in the Kuiper Belt, the unexplored “third zone” of our solar system populated by millions of small, icy bodies.

Numerous though they are, no Kuiper Belt object has ever been seen up close. NASA’s two Voyager probes—which traversed the third zone decades ago—might have spied a glimpse of one had they been equipped with the right instruments, except that the Kuiper Belt hadn’t even been detected yet. On New Years Eve, for the first time, NASA will get a chance at some facetime with one of these enigmatic space rocks.

At 9:33 pm PST, 33 minutes past midnight on the East Coast, the agency’s New Horizons probe will make a close pass of Ultima Thule, making it the most distant object ever to be visited by a spacecraft.

New Horizons has traveled for 13 years and across 4 billion miles to reach this point, and the probe looks to be in fine shape: Mission planners confirmed earlier this month that it will pass within 2,200 miles of Ultima Thule after determining that large objects, like moons, and smaller ones, like dust, were unlikely to pose a threat to the spacecraft as it blazed past in excess of 31,000 miles per hour. (“When you’re traveling that fast, hitting something even the size of a grain of rice could destroy the spacecraft,” says Hal Weaver, the mission’s project scientist.)

New Horizons’ trajectory will carry it three times closer to Ultima Thule than it did Pluto, which it shot past in the summer of 2015. The photos New Horizons beamed back then were the most detailed ever captured not just of the former planet, but the outer solar system. Because of its proximity, the images the probe collects of Ultima Thule will be more detailed still, and from a billion miles deeper in space. “Pluto blew our doors off,” Stern says, “but now we’re heading for something much more wild and woolly.”

This overhead view of Manhattan compares the image resolution New Horizons achieved at Pluto to what mission scientists expect to achieve at Ultima Thule.
NASA/JHUAPL/SwRI

Stern and his team discovered the object in 2014 using the Hubble Space Telescope, while searching the sky for places New Horizons could visit after its brief encounter with Pluto. In those first images, Ultima was just a glob of pixels that shifted every few minutes against a backdrop of unmoving stars.

In more recent images, captured by New Horizons’ Long Range Reconnaissance Imager, the object still appears as little more than a speck in a sea of much brighter specks. “When you search for it, it looks like stars puked all over the imagery,” says planetary scientist Amanda Zangari, who spent most of December collecting Ultima Thule’s position and brightness measurements. “To even see the darn thing, you need to stack multiple images, account for the distortion between them, and subtract the stars.” At 1/100th the diameter of Pluto, and 1/10,000th its brightness, Ultima Thule makes for a more elusive quarry than the erstwhile planet.

Through their observations, the team has determined that Thule (whose official designation is 2014 MU69) is either two separate objects orbiting one another at close range, or a pair of bodies that gravitated toward each other til they merged, forming the two lobes of something astronomers call a contact binary. Either way, the data suggests Ultima is no more than 20 miles in diameter, dark as reddish dirt, and well within range of New Horizons’ fuel supply.

It is also, in all likelihood, very, very old. Which is precisely why astronomers are so excited to study it up close.

Kuiper Belt objects like Ultima Thule are thought to be remnants of the solar system’s formation—the cosmic refuse that remained after the planets came into being some 4.6 billion years ago. That makes them an enticing destination for astronomers: Many of those objects aren’t just ancient, they’re also, astronomers think, perfectly preserved by temperatures approaching absolute zero. (So far removed is Ultima Thule from the sun’s warming rays, that our parent star would appear to an observer on its surface about the size that Jupiter does from here on Earth). NASA’s plan to visit one, map its features, study its makeup, detect its atmosphere (if one exists), and search it for satellites and rings is more than a flyby mission. It’s an archaeological expedition of cosmic scale and consequence.

New Horizons will investigate Ultima with the same suite of instruments it used to study the Pluto system back in 2015. A trio of optical devices will capture images of the object in color and black-and-white, map its composition and topography, and search for gasses emanating from its surface. Two spectrometers will also search for charged particles in Ultima Thule’s environs; a radio-science instrument will measure its surface temperature; and a dust counter will detect flecks of interplanetary debris. Fully loaded, the piano-sized probe weighs a hair over 1,000 pounds and requires less power than a pair of 100-watt light bulbs to operate its equipment.

This infographic depicts New Horizon’s activities before, during, and after the flyby, and which of its instruments will be active.
NASA / JHU-APL / SWRI

After its New Years Eve flyby, New Horizons will continue on its path out of the Kuiper Belt. But the third zone is vast. Even traveling at nearly nine miles per second, it’ll take the spacecraft a decade to traverse it and enter interstellar space. Stern and his colleagues will use that time to search for yet another target—one even further from the sun than Ultima Thule, and shrouded, perhaps, in still more mystery. It’s a tantalizing prospect for the New Horizons team. “To visit a place you know nothing about,” Weaver says. “That’s exploration at its finest.”

“The Machine” From HP Seeks To Reinvent Computers