A tale of two asteroids: Ryugu (left) and Bennu (right), shown side by side roughly to scale. Ryugu is just under 1 kilometer wide; Bennu is about 500 meters. Soon we’ll be getting to know a lot more miniature worlds like these. (Credit: JAXA, left, NASA-GSFC/University of Arizona, right)

Many years ago, this magazine was owned by the Walt Disney Corporation, and I would sometimes get one of the company’s songs stuck in my head: “It’s a Small World,” the relentless musical accompaniment to the ride of the same name at Disney World in Florida. That song has popped up in my brain again recently, but in a very different and more majestic context. We are entering a new stage in the exploration of the solar system, one that inverts the theme of much that came before. Big is out and small is in.

The hot destinations in space right now are comets and asteroids–including asteroid Bennu, now coming into view of the ambitious OSIRIS-REx probe. The most innovative robotic explorers are the size of a briefcase. And in NASA’s latest pivot, the long-term plan to send humans back to the Moon and on to Mars is set to begin on a decidedly modest scale, with a set of low-budget, privately built lunar explorers. Cue the mental music: “It’s a Small Solar System (After All).”

To be fair, planetary scientists have been working hard to explore the small bodies of the solar system at least since Halley’s Comet passed close to the Sun three decades ago. But effort really kicked into high gear in 2014, when the European Space Agency’s (ESA) Rosetta probe arrived at Comet 67P/Churyumov–Gerasimenko and sent back dazzling images and data from the rubber-duck-shaped comet. Rosetta also deployed a small lander, Philae, that didn’t work quite as planned but that greatly added to the drama of the mission.

Previous spacecraft had revealed comets only as fuzzy, cryptic objects. Rosetta turned Comet 67P into a world of its own.

Not to be outdone, the Japanese space agency (JAXA) sent its Hayabusa2 probe to the asteroid Ryugu with four landers in tow. I covered the early results and implications of that mission in an earlier blog post. Ryugu is shaped like a top, strewn with rubble. Early views of Bennu show an intriguingly similar shape; apparently this is a common result of a rapid rotation, low gravity, and a weak internal structure. OSIRIS-REx will officially arrive at Bennu on December 3. We will get to know this 500-meter-wide asteroid a whole lot better in the weeks to come.

The current doubling up on small asteroids offers just a hint of what is coming soon. JAXA plans to follow up with the DESTINY+ mission to Phaethon, a bizarre “rock comet” that appears to be rocky but sheds dust into a cometlike tail. Some of those dust bits hit Earth every year as the Geminid meteors.

NASA has three very different asteroid missions in the works. Lucy will visit seven different Trojan asteroids, primitive bodies that share an orbit with Jupiter but travel ahead of or behind the giant planet in its course around the Sun. Psyche will explore an object of the same name–a bizarre metallic asteroid that may be the remnant core of an ancient, shattered protoplanet. DART will fly an impactor into a small near-Earth asteroid to test technologies for deflecting a body on a collision course. ESA may send a follow-up mission, Hera, to explore the aftermath of the impact.

That list doesn’t even include possible missions by the Indian and Chinese space agencies. Nor does it reflect the real explosion that is likely to follow a few years after–a consequence of the other small trend in space exploration. 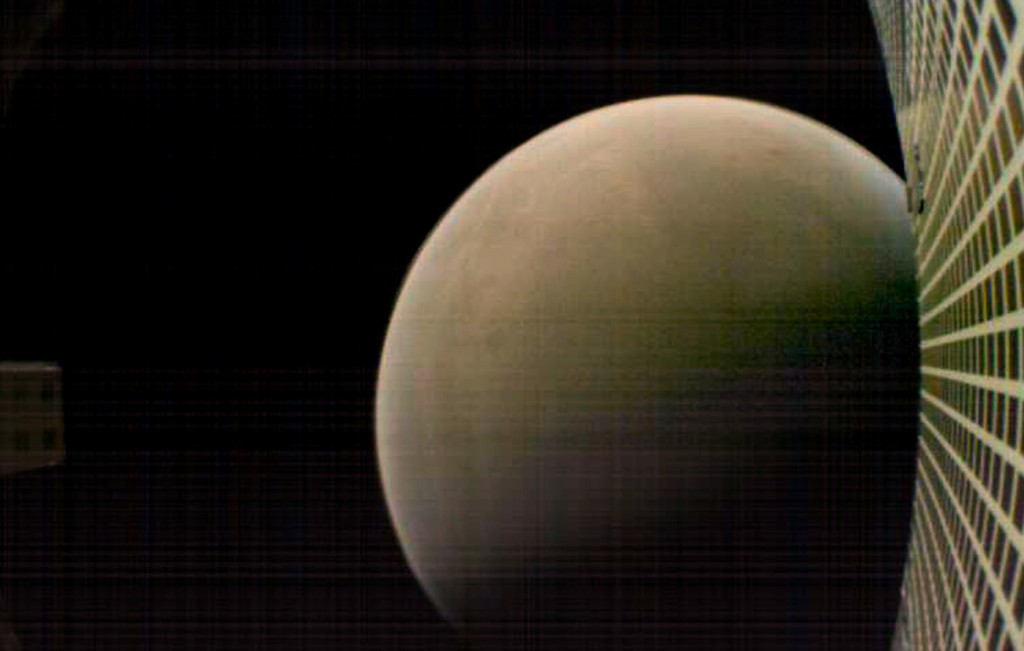 MarCO-B (Wall-E) took this stirring shot of Mars just after closest approach, when it was 7,600 kilometers from the planet. The grid at right is probe’s communication antenna. (Credit: NASA/JPL-Caltech)

Attack of the Cubes

When NASA’s InSight lander touched down on Mars last week, an even more significant event was taking place high overhead. I don’t mean to downplay the importance of the lander; it is an exceedingly clever mission that will examine the geophysical origin of Mars by studying the planet’s seismology and the flow of primordial heat from its interior. But in many ways InSight follows a now-familiar approach, built on the same basic architecture as earlier Mars landers.

What was not familiar was InSight’s companions, two tiny attendant probes officially known as MarCO-A and MarCO-B but more affectionately nicknamed Eva and Wall-E. They were build using an off-the-shelf, modular design known as a Cubesat. Nearly 1,000 Cubesats have been launched around the Earth to carry out focused experiments at low cost. Eva and Wall-E were the first Cubesats adapted for deep-space exploration. You can bet they won’t be the last.

The MarCO project was primarily a technology experiment to prove that Cubesats could be powerful enough and robust enough to be useful tens of millions of kilometers from Earth. They succeeded beautifully, helping to relay data from InSight during and immediately after its Mars landing. Eva and Wall-E also carried small, commercial onboard cameras that took unique snapshots of Mars as they flew by. (They do not have rocket engines of their own, and were never designed for landing.) The MarCO project had a budget of just $18 million. 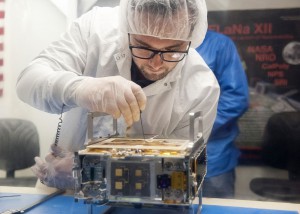 NASA plans a larger test of Cubesats when it makes the first test flight of the Space Launch System rocket, currently planned for June, 2020. You could not ask for a more pointed contrast: the enormous, late, over-budget SLS rocket unleashing a fleet of 13 nimble, fast, cheap space explorers.

Most of these Cubesats will fly to the Moon. They will dovetail nicely with NASA’s just-announced program of hiring private companies to deliver science experiments to the Moon. But one of the Cubesats, NEA Scout, will follow MarCO into deep space, this time using a small solar sail to navigate to a near-Earth asteroid (hence “NEA”).

Asteroids and Cubesats are natural companions. Landing on a planet requires a massive, complex set of mechanisms for decelerating and touching down softly. Because of their feeble gravity, small asteroids like Bennu and Ryugu are much simpler. All you really need to do is fly alongside them. You can touch down (more like “brush by”) and then take off again with hardly any energy at all. Why, even a Cubesat could do it. Small bodies and small spacecraft go together naturally.

The other synergy between asteroids and Cubesats is volume–or rather, abundance. There more than one million asteroids the size of Bennu or larger. It would be scientifically fascinating to survey a large number of them up close, but it would be madness to attempt that with a series of $800 million missions like InSight. On the other hand, it’s easy to imagine sending out dozens, even hundreds, of budget Cubesats to swarm around Earth’s orbit and out into the asteroid belt like a hive of bees checking out the flowers in their neighborhood.

Space-resource enthusiasts like Philip Metzger have already sketched out concepts along those lines. Last year, a Finnish group showed how a fleet of 50 nanospacecraft could survey 300 asteroids in about 3 years, for much less than the cost of a single Mars lander. Asteroids are appealing commercial targets because their resources are right there for the taking–easy on, easy off. Asteroids and comets are also appealing scientific targets because they are surviving remnants from the early days of the solar system. Piece by piece, chapter by chapter, they contain the story of our origin.

We will understand the full sweep of that story only when we put the small parts together. And…there goes that song in my head again.