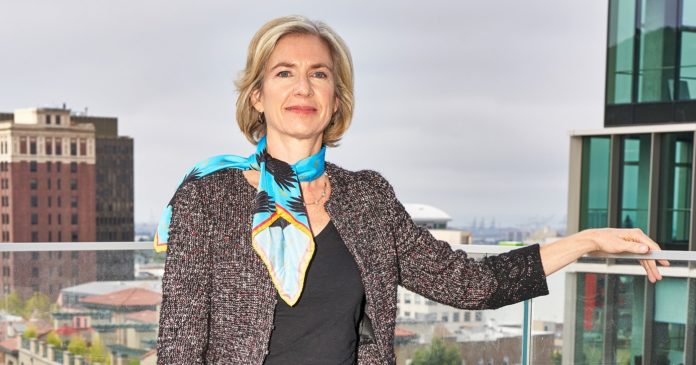 Delaney Van Riper was exhausted. It was the summer of 2017 and she’d spent the previous day touring UC Santa Cruz’s cliffside campus, getting her student paperwork in order, and meeting some of her 4,000 fellow incoming Slugs. Now, dressed head-to-toe in sweats, she was ready to nap in the backseat for the ride to her family’s home three hours away in Sacramento. But first, she had to stop at a glass and granite building in San Francisco’s Mission Bay, roll up her sleeve, and give some scientists she’d just met a few tubes of blood from the crook of her arm.

While Van Riper spent the next year navigating new roommates and freshman poetry classes, researchers at the Gladstone Institutes were busy reprogramming her blood cells into stem cells and then neurons, growing them in incubators by the million, and sending in Crispr systems to try to cut out a troublesome mutation lurking on the short arm of her longest chromosome.

Van Riper, now 19 and a sophomore literature major, was born with a rare genetic disease called Charcot-Marie-Tooth, or CMT, which is slowly eroding her nerve cells’ ability to ping messages back and forth between her brain and her muscles. Doing things with her hands and feet, like walking and holding a pencil, has been growing progressively harder. But last year she became one of a handful of patients whose cells are undergoing experimental Crispr procedures at the Gladstone that may one day be used to rid them of their genetically-determined disabilities.

In September, UC Berkeley biochemist and Crispr pioneer Jennifer Doudna announced she was opening up a lab across the Bay to establish the epicenter of a whole new field of medicine: genome surgery. As an ever-increasing crop of Crispr drug companies collect capital and race toward clinical trials, Doudna saw an opportunity for someone had to take an expanded, more inclusive view. She found a home for it at the Gladstone, a nonprofit biomedical research center with hundreds of scientists and an affiliation with UC San Francisco and its clinical programs. What she envisions is the development of procedures closer to how surgeons slice out malignant tumor tissues with scalpels today. Except tomorrow’s genome surgeons will use Crispr’s molecular scissor function to remove or replace faulty genes—curing diseases at their genetic source code.

“We’re focused on what’s going to be best for patients in the long run, not simply what product can we quickly bring to market,” says Doudna. Though also the co-founder of a number of Crispr-based medical ventures, she worries that pressures for them to quickly turn a profit will leave behind many rare genetic diseases, each caused by a constellation of unique mutations that all require custom-built tools to fix them. And then there’s the question of the affordability of the treatments that do make it to market. Lowering the price tag for patients and making Crispr a sustainable technology is something more readily sorted out in a nonprofit setting, says Doudna. “We need to step back and figure out how to ensure in the future that this technology is not something only available to the 0.1 percent.”

Cost isn’t the only challenge. There’s also the problem of getting Crispr into the right cells, and into enough of those cells to make a difference. You can teach cells to build Crispr systems themselves, with instructions ferried in by innocuous viruses, but that approach makes it harder to control Crispr’s cutting action. You can coax Crispr into the cell directly by coating the protein complex itself in fat particles, but it’s not very efficient and it’s hard to direct. How will physicians deliver gene editors to tissues deep inside the human body, like the heart, or the brain?

Then there are even more fundamental unknowns associated with developing an entirely new medical modality. What’s the right dose? What’s the right way to calculate risks and benefits for patients? What data do you have to collect to know it’s safe and effective? Doudna and her collaborators at the Gladstone hope to answer these big questions over the next five to ten years. Their efforts are perhaps the most concentrated push in a national effort to create the tools and rules necessary for doctors to widely adopt genome editing as part of standard care for the 25 million Americans estimated to be living with one of 6,000 diseases caused by a glitch in their DNA.

In January, the National Institutes of Health committed $190 million over the next six years to speed Crispr into the clinic. So far, it has awarded grants to a consortium of 17 academic research institutions, including the Gladstone, and one biotechnology company to help them assemble and make public a Crispr toolkit. Among other things, it will contain better delivery techniques as well as safer, more precise genome editors, along with cell-tracking technologies to check on the results after surgery. Its components are intended, in part, to help the Food and Drug Administration chart a smooth regulatory path for Crispr, so that it gets treated like the hybrid technology it is—part device (molecular scalpel), part drug (bacterial protein).

“Before this gets too far out in front of us, we’re trying to help set some standards around genome editing,” says Todd McDevitt, a senior investigator at the Gladstone who is assessing the safety of Crispr in human cells and tissues. Unlike other kinds of drugs that you can test in model organisms, it’s not possible to edit human genomes inside a mouse or a rat. Before doctors can start shooting Crispr into patients, scientists like McDevitt have to engineer lifelike human microtissues in which to test it first.

Inside McDevitt’s lab, one of his postdocs pulls out a plate where a few flesh-colored dots the size of a felt-tip pen float in a bath of hot-pink media. She slips it under an inverted fluorescence microscope. Immediately, two dark blobs fill the monitor nearby. A shock of green light shivers across them. A few seconds later it happens again. Each organoid is about a year-old, comprised of nearly 100,000 beating human heart cells. Encoded in their DNA is a green fluorescent protein that only lights up in the presence of calcium. Every green flash on the screen represents a microscopic heart ball contraction, and serves as a visual cue to any improvements (or damage) caused by Crispr.

Besides heart organoids, McDevitt’s lab is growing sheets of retinas and brain balls grown from cells donated by patients like Van Riper. Besides CMT, the Gladstone is also focusing its initial efforts on two other genetic disorders—a heart condition called cardiomyopathy and BEST disease, which causes progressive blindness. Over the next three years, as other researchers in the building design new and better Crispr systems, they’ll send them to McDevitt. Then, his team will try them out on their 3D organoids, each one carrying the mutational signature of the person whose body it came from. They’ll measure both the intended and the unintended consequences. The goal is to one day launch a clinical trial where patients like Van Riper receive Crispr genome surgery using constructs that have already shown success in their own cells.

“We’re trying to perfect a craft,” says Bruce Conklin, a physician and senior investigator at the Gladstone. “But the idea is to test lots of hypotheses with one patient so that the next person is much faster.”

Doudna credits Conklin, a long-time collaborator, with coining the term “genome surgery.” Together they envision a future where a patient with CMT comes into a hospital, gets his or her genome sequenced, and the doctor says, “Okay, based on your mutations you’re a candidate for Crispr A and Crispr B,” which have all been FDA-approved for that disease, along with Crispr C, D, E, F, and G. Together that suite of genome editors would cover every one of the thousand different mutations that all cause CMT. “In a system like that, we might just give the Crispr systems away for free,” says Conklin. “And then it’s just a procedure like an organ transplant. Nobody’s getting paid for an organ.”

But before that can happen, Doudna and Conklin will have to raise a significant amount of money to fund expensive clinical trials. And patients will have to volunteer to see if the Crispr that cures their cells in a dish and in ball-form can do the same thing inside their bodies. For Van Riper, that could potentially happen by the time she finishes college. She says she’s a little bit scared for when that day comes, if it ever does. “But somebody has to do it, right?” she says. “I wouldn’t participate if I wasn’t willing to see it all the way through to the end.”

Apple TV gets Dolby Atmos and streamlined sign-ons for channels and...

Logitech’s MX Ergo made me a trackball convert

This Is How A Smoke Detector Works [VIDEO]