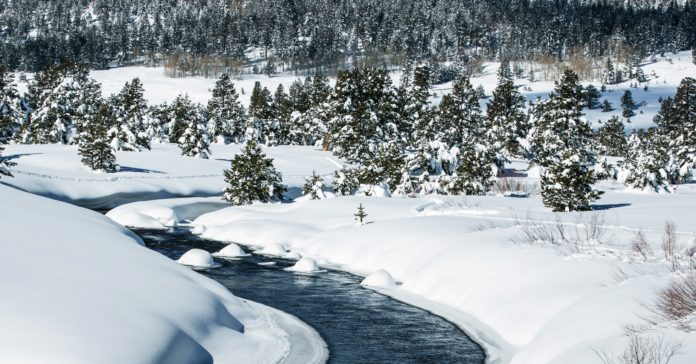 The mountains of the High Sierra and the Rockies are, in effect, shrinking, according to a new analysis of the nation’s snowpack over the past 36 years. These places are experiencing a shorter winter with less snow, just like regions closer to sea level.

That’s not good news for ski resorts and snowmobilers, as well as rural homeowners worried about wildfires that erupt in the summer and fall, experts say. In fact, it’s not so good for anyone living in Los Angeles, Phoenix or Denver, either. High mountain snowpack supplies drinking water throughout vast areas of Northern California and the Mountain West.

Some parts of the western United States have seen a 41 percent decline in the annual mass of snow since 1982. The affected region is about the size of South Carolina, according to a research team led by Xubin Zeng, professor of hydrology and atmospheric sciences at the University of Arizona. “For the future, that percentage will keep increasing,” says Zeng, who presented his findings at the annual meeting of the American Geophysical Union in Washington.

At the same time, the length of the snow season shrank by 34 days for the snowiest regions. Zeng used data collected by a network of backyard weather collectors who report snowfall every day to the National Weather Service across the United States, as well as an automated system of recording devices in the high mountains. These machines use 10-foot-wide rubber bladders filled with an anti-freeze solution that weigh how much snow lies on top of them.

Zeng and his colleagues then divided up the continental US into 2.5-mile squares to get a finer-resolution picture of how much snow was on the ground and for how long. Previous snowpack estimates used much larger 40-mile squares. A paper based on the new data is being published today in the Journal of Geophysical Letters.

The western snowpack is vital to maintaining drinking water for tens of millions of people from Denver to San Diego, as well as supporting a healthy forest ecosystem. Amato Evan, an atmospheric scientist at the Scripps Institution of Oceanography, used the snowpack dataset to look at the arrival and duration of winters in the Sierras and Rockies.

“The summer is coming earlier, and fall is coming later, so the snowpack is being squeezed in on both sides,” Evan says. “The mountains are shrinking, they are getting smaller in terms of snowpack. This is the first time someone has shown this result in observations.”

Even though snowfall can vary from year to year, the researchers say that looking over a long period of time gives them a more accurate measurement of where things are headed in the future. The declining western snowpack and shorter snow season is already fueling wildfires like the Camp Fire that destroyed the town of Paradise, California. That relationship seems obvious, but it was only just confirmed by satellite images, according to Donal O’Leary, a graduate student in geography at the University of Maryland.

“There are more wildfires during years of early snowmelt,” says O’Leary, who is also presenting his findings at the AGU meeting. “We are 95 percent confident in this relationship.”

All three researchers said that climate change, which is bringing warmer temperatures and greater rainfall to some areas, is to blame. “Our winters are getting sick and we know the reason why,” Evan said. “It’s global warming and rising temperatures. It’s the only logical explanation for what’s happening.” Things are likely going to get worse. A separate study published last month in the same journal predicts that California’s 10 major river watersheds could see an average of a nearly 80 percent drop in snowpack meltwater by 2100.