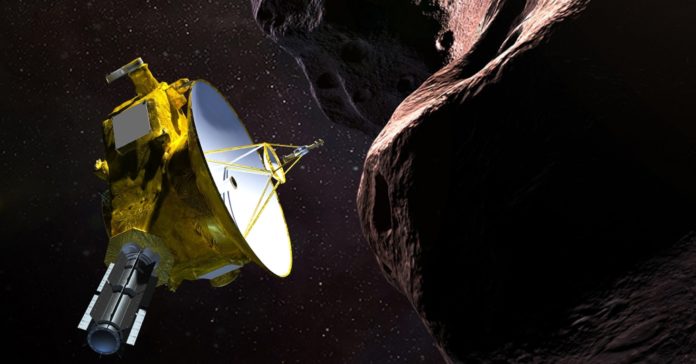 For the past 13 years, NASA’s New Horizons spacecraft has been bolting away from the sun at speeds in excess of 31,000 miles per hour, charting a course for the fringes of our solar system. In 2015, it made a close pass of Pluto, returning the highest resolution images of the erstwhile planet the world has ever seen. On New Year’s Eve, at 9:33 pm PT, it will make history again, when it soars past Ultima Thule—a small, cold, and mysterious world, the investigation of which could yield crucial clues about the formation of our planetary system some 4.5 billion years ago.

When it does, Ultima Thule (official designation: 2014 MU69) will become the most distant—and, astronomers suspect, the most primitive—celestial body humans have ever investigated up close. But nobody, not even New Horizons’ mission scientists, will be able to monitor the event in real time. When the spacecraft zips past Ultima, it will be more than 4 billion miles from Earth. The signals it beams back will take more than six hours to reach the Johns Hopkins University Applied Physics Laboratory in Laurel, Maryland, base of operations for the New Horizons mission.

But that doesn’t mean you can’t follow along. Here’s where to tune in, and what to expect from the mission in the first few hours and days of the new year.

New Horizons is scheduled to zip past Ultima Thule at around 9:33 pm PT / 12:33 am ET. That means the party in Maryland will feature two countdown clocks: One to ring in the new year, and a second, timed to hit zero 33 minutes later, to mark the historic flyby. NASA TV coverage will continue until around 10:00 pm PT / 1:00 am ET, but it will take 6 hours and 7 minutes for the signal to travel from the Kuiper Belt to Earth, so news of a successful flyby won’t reach us until later New Year’s Day.

When to Expect Images

The downlink data rate between New Horizons and Earth is just 500 bits per second. That means that, in addition to the long signal transmission time, photos and other observational data will require additional time to actually download. It also means that low-resolution images should arrive relatively quickly, with larger images taking slightly longer. As the mission’s principle investigator Alan Stern puts it: “In the days following the flyby, Ultima Thule’s going to become a real thing, then a real thing with a shape, then a real thing with geology.” Here’s when to expect what:

January 1, 7:00 am PT / 10:00 am ET: By this time, New Horizons’ mission scientists will expect to have heard from the probe about its health and whether the mission was successful. NASA TV may broadcast an update on the status of both.

January 1, 8:30 am PT / 11:30 am ET: The New Horizons science team will hold a press conference to reveal a low-resolution image of Ultima Thule on the order of a few dozen pixels.

January 2, 11:00 am PT / 2:00 pm ET: The team will convene to unveil a 10,000-pixel image of Ultima Thule. Team members anticipate the image will give them the clearest sense yet of the true shape of the object (or objects), which has puzzled them for years on account of its small size.

January 3, 11:00 am PT/ 2:00 pm ET: The New Horizons team will hold yet another press conference to release a 40,000-pixel image of the probe’s target. At this resolution, team members hope to resolve some of Ultima Thule’s larger-scale geological features.

February 2019: We’ll have to wait another month to receive megapixel-class images. Ultima Thule is a small target. To photograph it at high resolution, NASA’s probe will take hundreds of photos in rapid succession during its flyby. In many of those images, Ultima will appear partially out of frame, or be totally absent.

Rather than waste time downloading useless photos, mission scientists will sift through engineering data to determine which of the hundreds of images New Horizons captured on its close approach depict Ultima Thule in its entirety. That work will begin mid-January. (On January 4th, the sun will pass between New Horizons and Earth, severing communications until January 9th.) Once complete, the New Horizons team will know which images to retrieve from the craft’s recorder, which they should receive in February.

February 2019-September 2020: It will take an additional 20 months for the various data types aboard New Horizons to trickle back to Earth. “We’ll be getting new information coming back to earth about composition, about atmosphere, about satellites, about geology, about topography, about color, about rings, about moons, about every aspect of it,” Stern says. “That spacecraft is going to be pregnant with data, and hundreds of observations. We’re going to send it down, over and over, until they’re all on the ground.”