How Supercomputers Can Help Fix Our Wildfire Problem 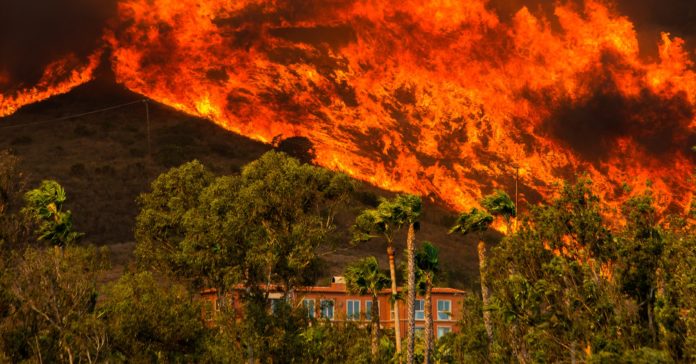 Fire is chaos. Fire doesn’t care what it destroys or who it kills—it spreads without mercy, leaving total destruction in its wake, as California’s Camp and Woolsey fires proved so dramatically this month.

But fire is to a large degree predictable. It follows certain rules and prefers certain fuels and follows certain wind patterns. That means its moves with a complexity that scientists can pick apart little by little, thanks to lasers, fancy sensors, and some of the most powerful computers on the planet. We can’t end wildfires altogether, but by better understanding their dynamics, ideally we can stop a disaster like the destruction of Paradise from happening again.

You could argue that a wildfire is the most complicated natural disaster, because it’s both a product of atmospheric conditions—themselves extremely complex—and a manipulator of atmospheric conditions. So for instance, California’s recent fires were driven by hot, dry winds coming from the east. These winds dried out vegetation that was already dry due to lack of rainfall, fueling conflagrations that burn more intensely and move faster.

But wildfires also create their own weather patterns. Blazes produce hot air, which rises. “You can imagine that if something moves from the surface up, there must be some kind of horizontal movement of air filling the gap” near ground level, says Adam Kochanski, an atmospheric scientist at the University of Utah. Thus the fire sucks in surface winds.

Researchers are using supercomputers and lookout stations like this to model the dynamics of wildfires in real time.

Wildfires don’t yet have the equivalent of a grand unified model to explain their behavior. The contributing factors are just so different, and work on such different scales—air dynamics for one, the aridity of local vegetation for another.

“That’s what’s really difficult from a modeling standpoint,” says Kochanski. You can’t hope to model a 50-square-mile wildfire with millimeter-scale resolution. So researchers like Kochanski simplify things. “We don’t really go into looking at how every single flame burns every single tree and how it progresses. No, we assume fuel is relatively uniform.”

Still, advances in computing are allowing researchers to crunch ever more data. At Los Alamos National Laboratory, atmospheric scientist Alexandra Jonko is using a supercomputer and a system called FIRETEC to model fires in extreme detail. It models, among other things, air density and temperature, as well as the properties of the grass or leaves in a particular area.

Jonko runs a bunch of simulations with different wind speeds, typically on the scale of 40 acres. “It’ll probably take me about four hours to simulate between 10 and 20 minutes of a fire spreading,” she says.

FIRETEC produces valuable physics-based data on fire dynamics to inform how fire managers do prescribed burns. This is pivotal for controlling vegetation that turns into fuel for fires. Wildfire agencies know generally the ideal conditions—low winds, for instance—but this type of modeling could help give even more granular insight.

To figure out where to do these burns, researchers are experimenting with lidar, the same kind of laser-spewing technology that helps self-driving cars find their way. This comes in the form of airborne lidar, which lets researchers visualize trees in 3D, supplemented with ground-based lidar, which details the vegetation underneath the trees.

That information is essential. “If we don’t know what the fuels are, then it’s a pretty big guess whether or not you’ve got dangerous fuels at a site,” says the University of Nevada, Reno’s Jonathan Greenberg.

The visualizations that come from lidar blasts are as stunning as they are useful. With this kind of data in hand, managers can more strategically deploy prescribed burns. California in particular has a serious problem with fire resources—in just the last year, the state has seen seven of its 20 most destructive fires ever. Money, then, goes to constantly fighting the infernos, leaving fewer resources for proactive measures like prescribed burns.

Another way to go about modeling fires is with reinforcement learning. You might have heard of researchers using this to get robots to learn—instead of explicitly showing a robot how to do something like putting a square peg in a square hole, you make it figure it out on its own with random movements. Essentially, you give it a digital reward when it gets closer to the correct manipulation, and a demerit when it screws up.

A model showing wind. The faster the wind, the longer and redder the arrows.

Turns out you can do the same thing with virtual fire. “It’s kind of like Pavlov’s dog,” says computer scientist Mark Crowley of the University of Waterloo. “You give it a biscuit and it will do that trick again.”

Crowley begins with satellite thermal images that show how a wildfire has burned over an area. Think of this as the simulated fire’s “goal,” like a robot’s goal is to get the peg in the hole. This approach is still in its early days, and Crowley is busy helping his artificial flames learn the art of being fire. If it accurately mimics how a real fire ended up traveling, the algorithm gets a digital reward—if not, it gets a demerit. “Then over time you update this function so it learns how to travel properly,” Crowley adds. In a sense, he can create a digital fire infused with artificial intelligence.

Out in the field, researchers are using a supercomputer at UC San Diego to confront the immediate threat of wildfires, with a program called ALERTWildfire. On mountaintops across California, lookout stations are loaded with sensors like high-def cameras and wind and moisture detectors. If the camera catches a fire breaking out, the system can pipe that atmospheric data to the supercomputer, which does real-time modeling of the blaze for fire agencies.

A terrestrial laser scanner image of a forest after a fire.

“They can see where the fire is going, what it’s going to look like in the near term and long term, and then continue to receive live updates,” says Skyler Ditchfield, co-founder and CEO of GeoLinks, a telecom that’s partnered with the project.

Why a supercomputer? “The magic word here is fast,” says Ilkay Altintas, chief data science officer at the San Diego Supercomputer Center. Wind-driven fires move quickly, and the bigger a fire gets, the more data it produces. “The computational complexity can depend on how big the fire is, how complicated the topography is, how the weather is behaving.”

As the detection network grows—85 cameras are deployed right now, but the researchers hope to expand to over 1,000 across California—so too does the torrent of data. Also, at the moment, human eyes have to watch the camera feeds to detect fires, though the idea is to get AI to do that in the future.

Tech won’t solve all our wildfire problems—we need to band together to reinforce our cities, for instance. But with ever more data and computing power, and ever better models, we can get better at confronting the wildfire menace. Fire is chaos, but it’s not impossible to understand.