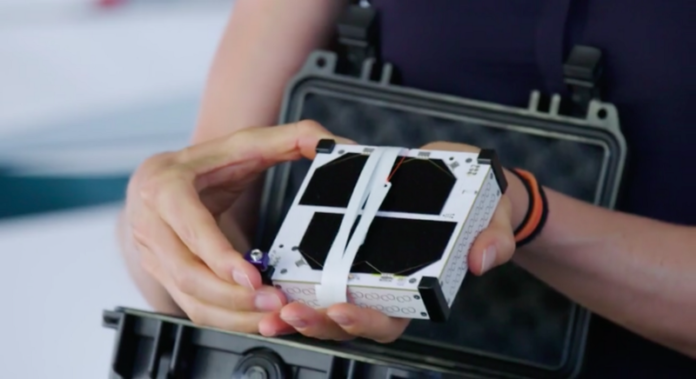 Back in March came the surprising news that a satellite communications company still more or less in stealth mode had launched several tiny craft into orbit — against the explicit instructions of the FCC. The company, Swarm Technologies, now faces a $900,000 penalty from the agency, as well as extra oversight of its continuing operations.

Swarm’s SpaceBEEs are the beginning of a planned constellation of small satellites with which the company intends to provide low-cost global connectivity.

Unfortunately, the units are so small — about a quarter the size of a standard cubesat, which is already quite tiny — that the FCC felt they would be too difficult to track, and did not approve the launch.

SpaceBEEs are small, as you can see. Credit: Swarm Technologies

Swarm, perhaps thinking it better to ask forgiveness than file the paperwork for permission, launched anyway in January aboard India’s PSLV-C40, which carried more than a dozen other passengers to space as well. (I asked Swarm and the launch provider, Spaceflight, at the time for comment but never heard back.)

The FCC obviously didn’t like this, and began an investigation shortly afterwards. According to an FCC press release:

The investigation found that Swarm had launched the four BEEs using an unaffiliated launch company in India and had unlawfully transmitted signals between earth stations in Georgia and the satellites for over a week. In addition, during the course of its investigation, the FCC discovered that Swarm had also performed unauthorized weather balloon-to-ground station tests and other unauthorized equipment tests prior to the small satellites launch. All these activities require FCC authorization and the company had not received such authorization before the activities occurred.

Not good! As penance, Swarm Technologies will have to pay the aforementioned $900,000, and now has to submit pre-launch reports to the FCC within five days of signing an agreement to launch, and at least 45 days before takeoff.

The company hasn’t been sitting on its hands this whole time. The unauthorized launch was a mistake to be sure, but it has continued its pursuit of a global constellation and launched three more SpaceBEEs into orbit just a few weeks ago aboard a SpaceX Falcon 9.

Swarm has worked to put the concerns about tracking to bed; in fact, the company claims its devices are more trackable than ordinary cubesats, with a larger radar cross section and extra reflectivity thanks to a Van Atta array (ask them). SpaceBEE-1 is about to pass over Italy as I write this — you can check its location live here.