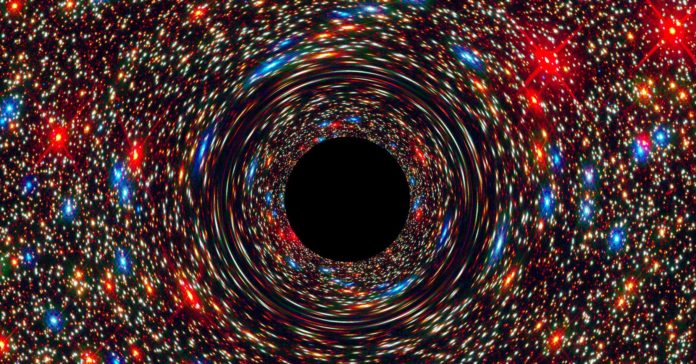 Physicists are remarkably frank: they don’t know what dark matter is made of.

“The gut feeling is that 80 percent of it is one thing, and 20 percent of it is something else,” says physicist Gray Rybka of the University of Washington. Why does he think this? It’s not because of science. “It’s a folk wisdom,” he says.

Peering through telescopes, researchers have found a deluge of evidence for dark matter. Galaxies, they’ve observed, rotate far faster than their visible mass allows. The established equations of gravity dictate that those galaxies should fall apart, like pieces of cake batter flinging off a spinning hand mixer. The prevailing thought is that some invisible material—dark matter—must be holding those galaxies together. Observations suggest that dark matter consists of diffuse material “sort of like a cotton ball,” says Maruyama, who co-leads a dark matter research collaboration called COSINE-100.

Here on Earth, though, clues are scant. Given the speed that galaxies rotate, dark matter should make up 85 percent of the matter in the universe, including on our provincial little home planet. But only one experiment, a detector in Italy named DAMA, has ever registered compelling evidence of the stuff on Earth. “There have been hints in other experiments, but DAMA is the only one with robust signals,” says Maruyama, who is unaffiliated with the experiment. For two decades, DAMA has consistently measured a varying signal that peaks in June and dips in December. The signal suggests that dark matter hits Earth at different rates corresponding to its location in its orbit, which matches theoretical predictions.

But the search has yielded few other promising signals. This year, several detectors reported null findings. XENON1T, a collaboration whose detector is located in the same Italian lab as DAMA, announced they hadn’t found anything this May. Panda-X, a China-based experiment, published in July that they also hadn’t found anything. Even DAMA’s results have been called into question: In December, Maruyama’s team published that their detector, a South-Korea based DAMA replica made of some 200 pounds of sodium iodide crystal, failed to reproduce its Italian predecessor’s results.

These experiments are all designed to search for a specific dark matter candidate, a theorized class of particles known as Weakly Interacting Massive Particles, or WIMPs, that should be about a million times heavier than an electron. WIMPs have dominated dark matter research for years, and Miguel Zumalacárregui is tired of them. About a decade ago, when Zumalacárregui was still a PhD student, WIMP researchers were already promising an imminent discovery. “They’re just coming back empty-handed,” says Zumalacárregui, now an astrophysicist at the University of California, Berkeley.

He’s not the only one with WIMP fatigue. “In some ways, I grew tired of WIMPs long ago,” says Rybka. Rybka is co-leading an experiment that is pursuing another dark matter candidate: a dainty particle called an axion, roughly a billion times lighter than an electron and much lighter than the WIMP. In April, the Axion Dark Matter Experiment collaboration announced that they’d finally tweaked their detector to be sensitive enough to detect axions.

The detector acts sort of like an AM radio, says Rybka. A strong magnet inside the machine would convert incoming axions into radio waves, which the detector would then pick up. “Given that we don’t know the exact mass of the axion, we don’t know which frequency to tune to,” says Rybka. “So we slowly turn the knob while listening, and mostly we hear noise. But someday, hopefully, we’ll tune to the right frequency, and we’ll hear that pure tone.”

He is betting on axions because they would also resolve a piece of another long-standing puzzle in physics: exactly how quarks bind together to form atomic nuclei. “It seems too good to just be a coincidence, that this theory from nuclear physics happens to make the right amount of dark matter,” says Rybka.

As Rybka’s team sifts through earthly data for signs of axions, astrophysicists look to the skies for leads. In a paper published in October, Zumalacárregui and a colleague ruled out an old idea that dark matter was mostly made of black holes. They reached this conclusion by looking through two decades of supernovae observations. When a supernova passes behind a black hole, the black hole’s gravity bends the supernova’s light to make it appear brighter. The brighter the light, the more massive the black hole. So by tabulating the brightness of hundreds of supernovae, they calculated that black holes that are at least one-hundredth the size of the sun can account for up to 40 percent of dark matter, and no more.

“We’re at a point where our best theories seem to be breaking,” says astrophysicist Jamie Farnes of Oxford University. “We clearly need some kind of new idea. There’s something key we’re missing about how the universe is working.”

Farnes is trying to fill that void. In a paper published in December, he proposed that dark matter could be a weird fluid that moves toward you if you try to push it away. He created a simplistic simulation of the universe containing this fluid and found that it could potentially also explain why the universe is expanding, another long-standing mystery in physics. He is careful to point out that his ideas are speculative, and it is still unclear whether they are consistent with prior telescope observations and dark matter experiments.

WIMPs could still be dark matter as well, despite enthusiasm for new approaches. Maruyama’s Korean experiment has ruled out “the canonical, vanilla WIMP that most people talk about,” she says, but lesser-known WIMP cousins are still on the table.

It’s important to remember, as physicists clutch onto their favorite theories—regardless of how refreshing they are—that they need corroborating data. “The universe doesn’t care what is beautiful or elegant,” says Farnes. Nor does it care about what’s trendy. Guys, the universe might be really uncool.