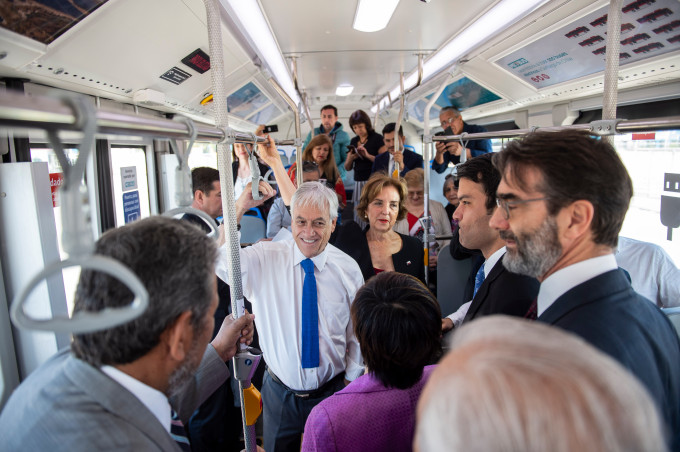 Over the past few years, Chinese automaker giant BYD has been on a partnership spree with cities across China to electrify their public transportation systems, and now it’s extending its footprint across the globe. On Thursday, BYD announced that it has shipped 100 electric buses to Santiago, the capital city of Chile.

The step marks the Chinese firm’s further inroads into the Latin American country where a green car revolution is underway to battle smog. BYD’s first batch of vehicles arrived in Santiago last November, and the Warren Buffett-backed carmaker remains the only electric public bus provider in the country.

Chile is on the map of China’s grand Belt and Road Initiative, aiming to turbocharge the world’s less-developed regions with infrastructure development and investments. “With the help of ‘One Belt One Road,’ BYD has successfully entered Chile, Colombia, Ecuador, Brazil, Uruguay and other Latin American countries. As the region accelerates its electric revolution, BYD may be able to win more opportunities,” said BYD in a statement.

The 100 buses embarked on a 45-day sea voyage from BYD’s factory in eastern China to land on the roads of Santiago. They sport the Chilean national colors of red and white on the exterior and provide USB charging ports inside to serve a generation who live on their electronic devices.

The fleet arrived through a partnership between BYD and Enel, a European utility juggernaut that claims to make up 40 percent of Chile’s energy sales in 2017. Enel has purchased the fleet from BYD and leased them to local transportation operator Metbus while the Chilean government set the rules and standards for the buses, a BYD spokesperson told TechCrunch.

Local passengers graded BYD’s electric vehicles at 6.3 out of 7, well above the 4.6 average of the Santiago public transportation system, according to a survey jointly produced by Chile’s Ministry of Energy, as well as Ministry of Transport and Telecommunications. Respondents cited qualities such as low noise level, air conditioning and USB charging that the buses deliver.

Santiago currently has 7,000 public buses running on the road, among which 400 get replaced every year. A lot of the new ones will be diesel-free as the Chilean government said it aims to increase the total number of electric vehicles by tenfold by 2022.