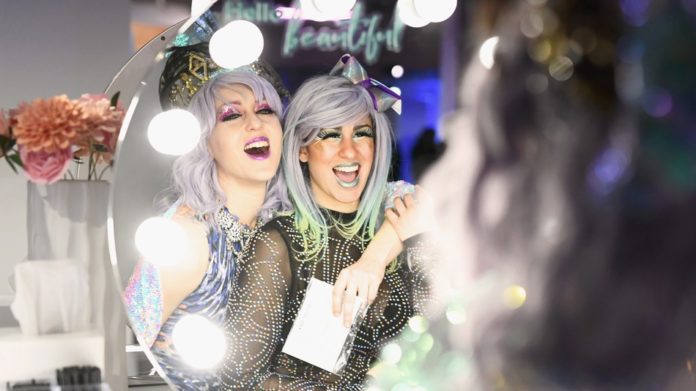 I got so up close and personal with a fake rock wall at Refinery29’s experiential pop-up, 29Rooms, that fuzzy little pieces of moss kept falling off of my dress long after my visit. The appearance of each new green fuzz reminded me of the cool mist and warm light I’d felt as they’d stuck to my body in the first place — while I was blindfolded and wearing headphones.

My encounter with the wet moss was one of a handful of “phone-free” experiences at the event, which is in its fourth year. We’ve come to a point when those who visit exhibits built for Instagram — they’re a dime a dozen these days — are demanding something more.

“We’re responding to our audience’s desire to get really hands on,” Piera Gelardi, Refinery29’s executive creative director and co-founder said. Past visitors have asked for more than just Instagram backdrops. They want interactivity, she said. They want connection.

“It’s important to me that people actually participate,” she added as she led a gaggle of media on a tour of the downtown Los Angeles exhibit. “You need to take part to get what these places are about. You need to dance, you need to create art. You need to participate to get the full experience.”

Under the theme “Expand Your Reality,” the creators took pains to imbue the pop-up, which opened Wednesday and runs through Sunday, with installations that promoted social justice issues, encouraged communication and interaction with fellow guests, and, at times, even requested that visitors put their phones away. 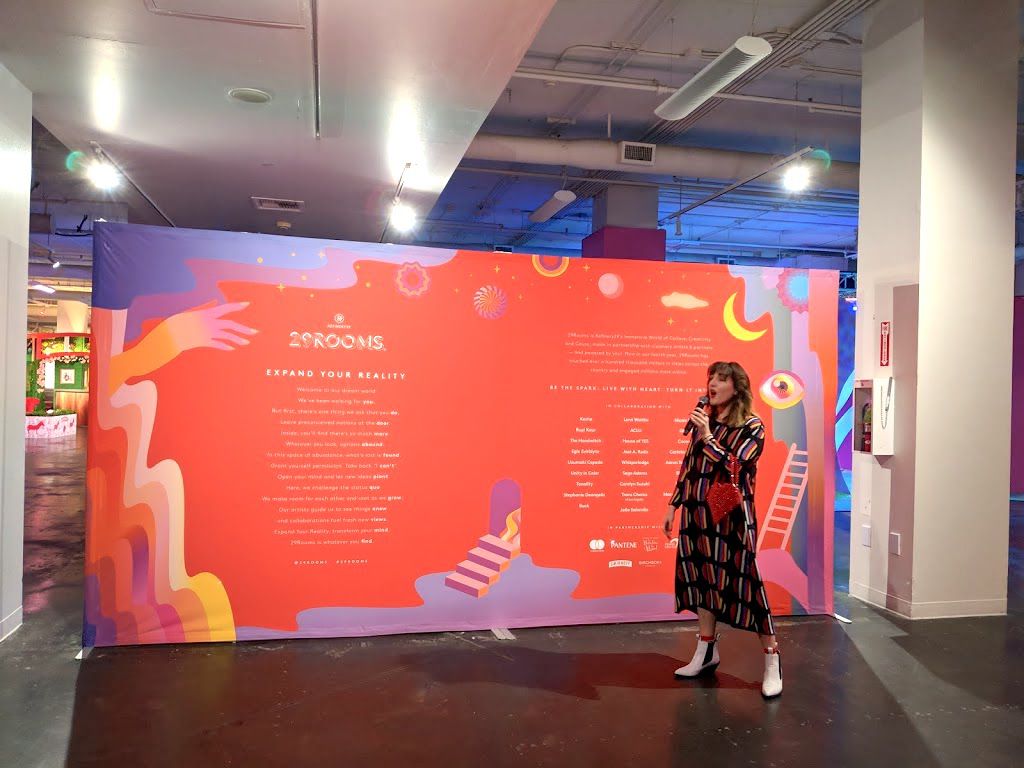 Piera Gelardi, Refinery29’s executive creative director and co-founder, welcomes us to 29Rooms with a poem.

I expected the woke-ification of 29Rooms to look a lot like a pig in lipstick. I doubted whether “phone-free experience” signs and nonprofit-led installations were capable of transforming a place born from the empty attitude of “doin’ it for the gram” into one with any sort of meaning.

29Rooms is certainly still an Instagram museum at heart — everything, everywhere, looks primed for a photo. Instagram museums are spaces specifically created to provide Instagram-worthy photo stagings for visitors. They are born with selfie-taking in mind — not as an unintended consequence, as has been the case with works in traditional museums, like Yayoi Kusama’s much-photographed surreal spaces.

But 29Rooms’ collaborations with artists and minority groups, the presentation of useful information, and forced moments of phoneless sensory exploration, actually stirred, at times, genuine emotion and surprise in me.

The phone-free experiences may have been few and far between, but they were actually effective, sometimes impactful, and, at the very least, fun.

People have recently been slamming the Instagram museum phenomenon — from the Museum of Ice Cream to Color Factory — as the real world manifestation of social media narcissism. Critics have used these “museums” to decry the emptiness of an existence lived for the sake of capturing photos. The New Yorker, the New York Times, Wired, Vox, and, yes, Mashable, have all taken swings at “experiential pop-ups” created for the sake of getting a photo and promoting brands, calling them shallow, irresponsible, and, frankly, depressing.

Refinery29 apparently got the message. It oriented some of this year’s installations toward “pro-social causes.” And created multiple rooms with instructions to put your phone away — a tall order in a space crafted for capturing photos.

“We want to help people tap into different passions, and create a space where they can access things they might not have been otherwise exposed to,” Gelardi said. “There’s a loneliness, a void of meaning, when we do everything with our phones.”

Of the 29 stations, we counted four that were designed to be “phone-free.” A few more were meant to be “experiential,” “interactive,” or “meditative,” meaning that 29Rooms wanted to emphasize the activity, not the photography. But, let’s be honest, you’ll still see visitors snapping photos for the gram in these spaces. 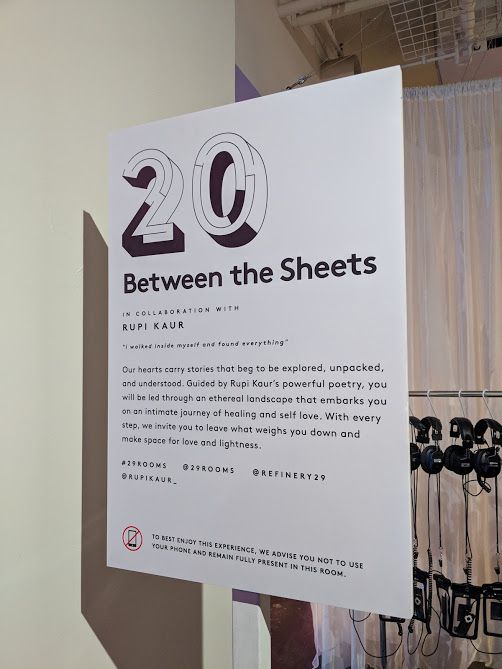 A small note at the bottom of this experience asks visitors to leave their phones in their purses.

The best of the phone-free interactions was the room made in collaboration with a New York City ASMR spaced called Whisperlodge.

In Whisperlodge’s installation, visitors put on noise-canceling headphones and get blindfolded. They are then guided into a room where a poetic, whispered recording instructs them to feel their way across, encountering different sounds and smells.

Since you’re blindfolded, there is actually no way to photograph anything. There’s no record of your experience, no way to garner likes on what just happened. And moving from a damp, moss-covered rock wall, to a flower-filled vertical meadow, with no assurance that you wouldn’t get lost in space on the way, required a leap of faith, and delivered, for me, a personal sense of wonder. 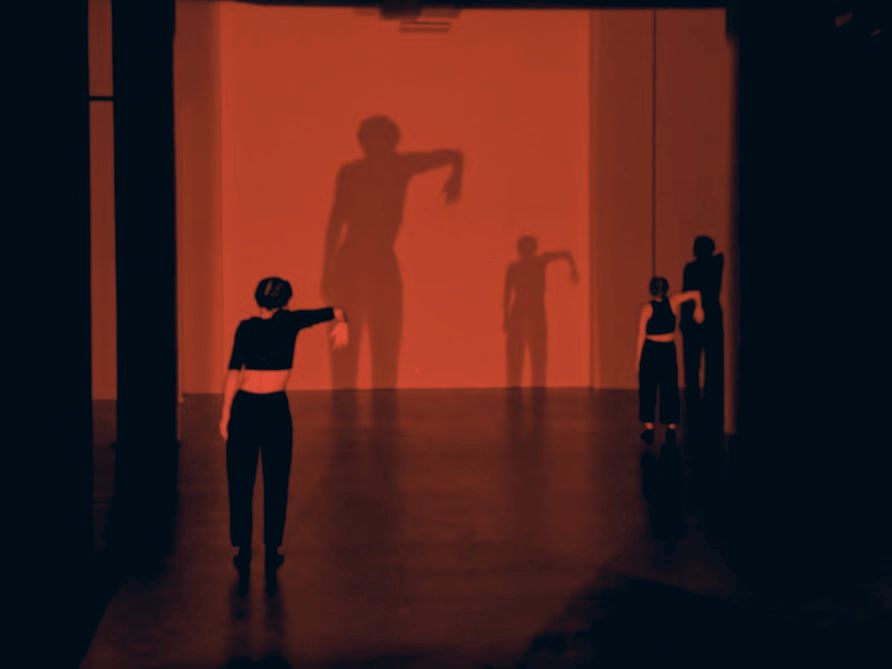 Dancers play with shadow as noises from a nearby sound bath echo in a cavernous room.

The other phone-free installations included a “disco” by the Brooklyn club House of Yes (although one can argue you could still whip out your phone while dancing among the confetti), a walking tour through a desert narrated by poet and Instagram celebrity Rupi Kaur, and a pared-down version of the popular New York Times challenge, 36 Questions That Lead to Love. There’s not much to photograph in the “questions” room, and the commitment to answer 29 intimate questions for a stranger is not something you’d even necessarily want to do. As we went through the tour, I heard a fellow attendee say of the questions room, “that sounds like my worst nightmare.”

The disco and the poetry room, however, are still high on the aesthetically pleasing scale. And the consent and confidence-promoting signs of the disco in particular look like they’re just waiting to be posted online. 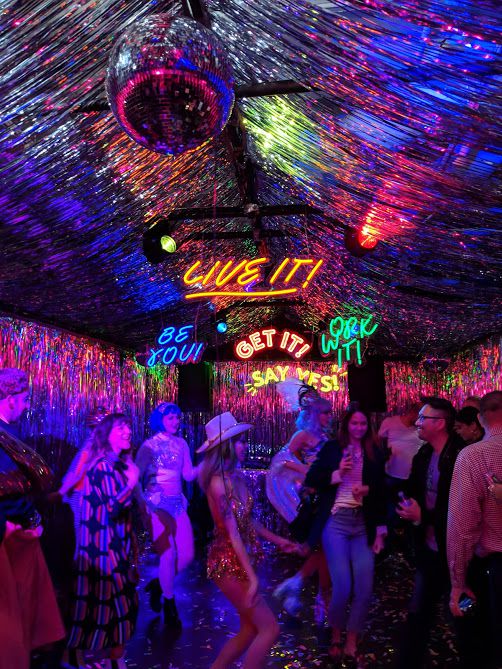 The House of Yes disco’s no phones policy was not strict, per se.

I enjoyed participating in both of these rooms; dancing was fun, and the poem’s author had a soothing voice to listen to as you walked along a pretty space. But, even if these rooms were ostensibly phone-free, the design made me wonder how committed 29Rooms was to that decision.

But in some of the other rooms with less explicit phone policies, the sensations, interactions, and actual meat of the content brought more to the pop-up than I was expecting. In a palm reading room, you sit across from someone, likely a stranger, separated by a solid wall. There is a small hole through which you can slip your palm, and your “partner” traces your hand lines, and tells you about your fate and personality, thanks to a “palmistry” guide on the wall. 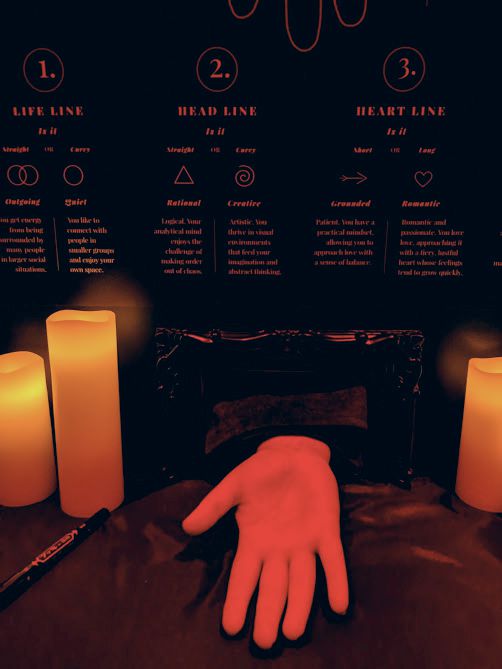 This was silly, but it was actually entertaining and something I hadn’t experienced before. The feeling of having someone I couldn’t see touching and running her finger over my palm was definitely … strange. In a good way.

The social justice activations also went far beyond lip service. The Los Angeles Trans Chorus performs, and clad in rainbow robes, seeing transgender people of all ages, races, and gender identities singing together moved me in a way I wasn’t expecting. 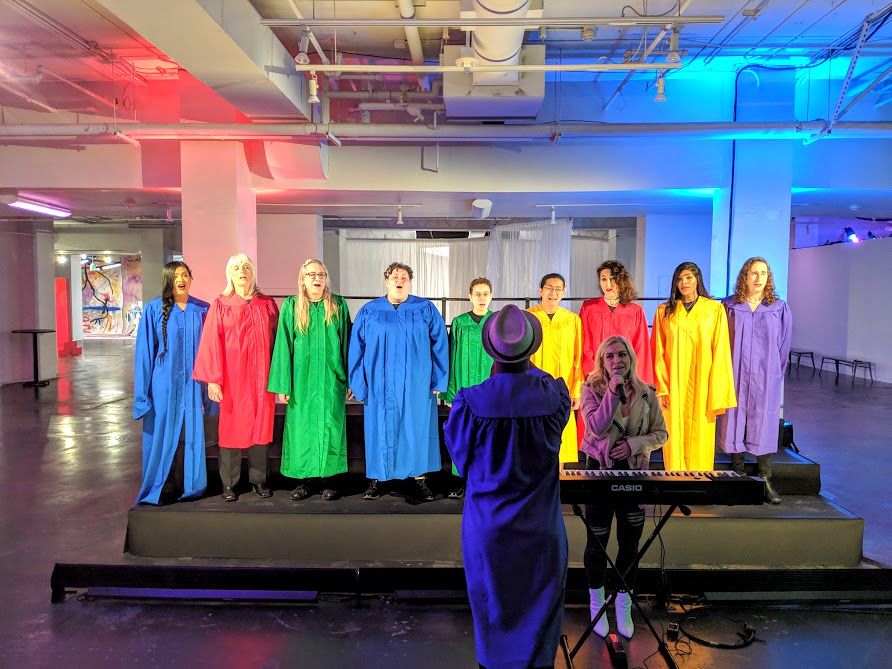 The Trans Chorus of Los Angeles performs at 29Rooms regularly.

29Rooms also features a game show–inspired exhibit about civil rights sponsored by the ACLU and a phone booth sponsored by Planned Parenthood where attendees can learn about Plan B. Most notably, a dark room plays a new video from Master of None‘s Lena Waithe on all four walls; Whitney Houston sings the National Anthem while you’re surrounded by images of the LA Riots, segregation, and police brutality, as well as President Obama, Magic Johnson, and James Baldwin. Part of the ticket sales for 29Rooms goes to supporting the ACLU. (Tickets cost $39.99 or $69.99 depending on entry time; parking’s an additional $20.)

To be sure, 29Rooms had plenty of aesthetically pleasing spaces that existed for their own sake, with little to no “higher purpose.” Even in a space with the purpose of “meditation,” I heard one glitter-clad attendee enthusiastically say while snapping photos “Oh my god, the lighting in here is incredible. It’s like a filter.” 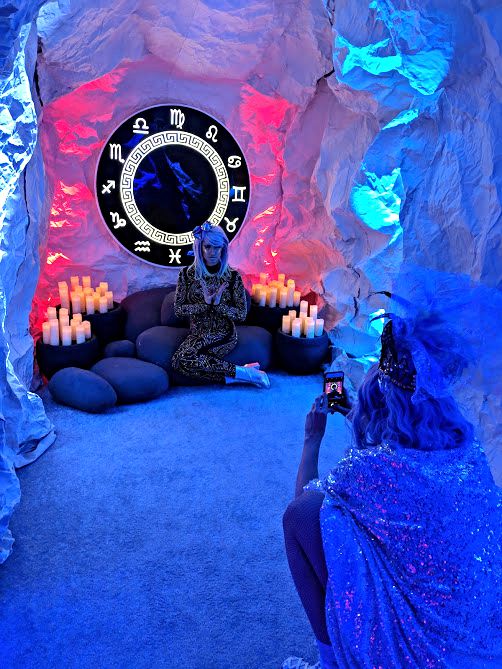 Performers take a selfie in a meditation room.

But maybe … that’s ok. Maybe an Instagram museum that manages to integrate novel feelings and valuable information within the draw of the selfie-scene is a success. We can criticize these phone-free and social-justice oriented installations as a way of justifying something inherently rotten. Or view the integration of minority culture and causes into a for-profit venture as a form of appropriation.

Or we can view these efforts as earnest, and, as progress. If Instagram museums show that we’re careening towards the end of civilization, perhaps suffusing generational vapidity with the techniques of mindfulness and messages of social justice is keeping us from falling off of the edge. 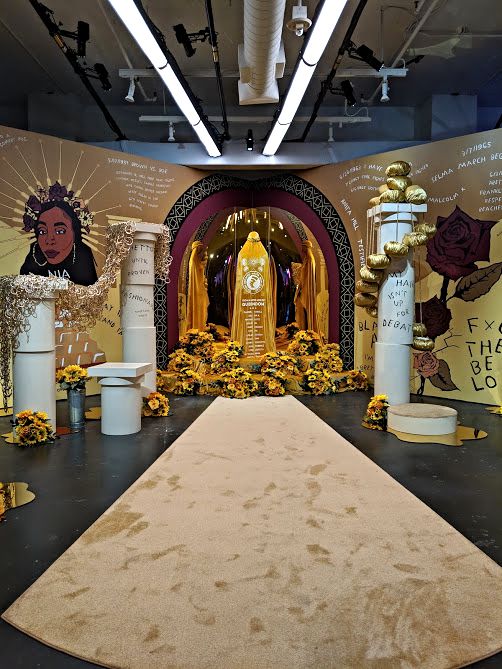 One of the 29 rooms: this one, devoted to black female excellence.

And maybe, some more political and emotional vegetables along with our social media cotton candy is just what we’re craving, these days. 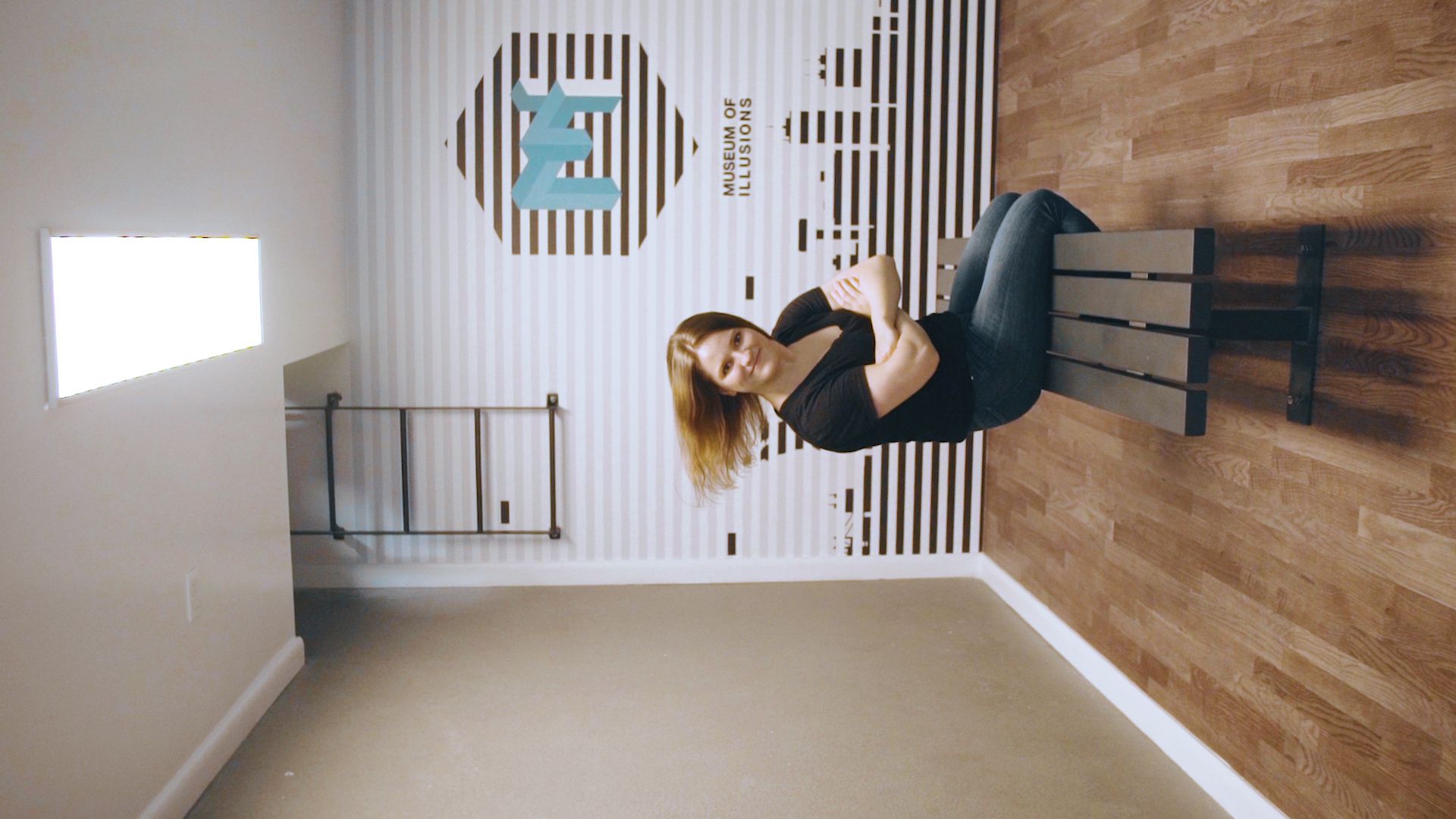 Why Blissfully decided to go all in on serverless

GizmoCrazed - October 2, 2018 0
Serverless has become a big buzzword of late, and with good reason. It has the potential to completely alter how developers write code. They...

Scientists Say They're Close to Making A Spicy Tomato