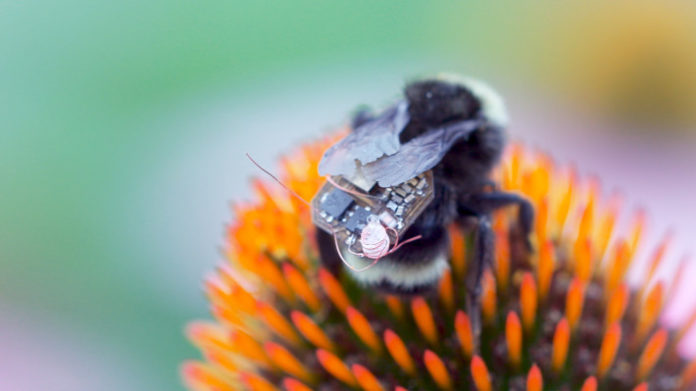 There’s lots of research going into tiny drones, but one of the many hard parts is keeping them in the air for any real amount of time. Why not hitch a ride on something that already flies all day? That’s the idea behind this project that equips bumblebees with sensor-filled backpacks that charge wirelessly and collect data on the fields they visit.

A hive full of these cyber-bees could help monitor the health of a field by checking temperature and humidity, as well as watching for signs of rot or distress in the crops. A lot of this is done manually now, and of course drones are being set to work doing it, but if the bees are already there, why not get them to help out?

The “Living IoT” backpack, a tiny wafer loaded with electronics and a small battery, was designed by University of Washington engineers led by Shyam Gollakotta. He’s quick to note that although the research does to a certain extent take advantage of these clumsy, fuzzy creatures, they were careful to “follow best methods for care and handling.”

Part of that is minimizing the mass of the pack; other experiments have put RFID antennas and such on the backs of bees and other insects, but this is much more sophisticated.

The chip has sensors and an integrated battery that lets it run for seven hours straight, yet weighs just 102 milligrams. A full-grown bumblebee, for comparison, could weigh anywhere from two to six times that.

They’re strong fliers, if not graceful ones, and can carry three-quarters of their body weight in pollen and nectar when returning to the hive. So the backpack, while far from unnoticeable, is still well within their capabilities; the team checked with biologists in the know first, of course.

“We showed for the first time that it’s possible to actually do all this computation and sensing using insects in lieu of drones,” explained Gollakotta in a UW news release. “We decided to use bumblebees because they’re large enough to carry a tiny battery that can power our system, and they return to a hive every night where we could wirelessly recharge the batteries.”

The backpacks can track location passively by monitoring the varying strengths of signals from nearby antennas, up to a range of about 80 meters. The data they collect is transferred while they’re in the hive via an energy-efficient backscatter method that Gollakotta has used in other projects.

The applications are many and various, though obviously limited to what can be observed while the bees go about their normal business. It could even help keep the bees themselves healthy.

“It would be interesting to see if the bees prefer one region of the farm and visit other areas less often,” said co-author Sawyer Fuller. “Alternatively, if you want to know what’s happening in a particular area, you could also program the backpack to say: ‘Hey bees, if you visit this location, take a temperature reading.’ ”

It is of course just in prototype form right now, but one can easily imagine the tech being deployed by farmers in the near future, or perhaps in a more sinister way by three-letter agencies wanting to put a bee on the wall near important conversations. The team plans to present their work (PDF) at the ACM MobiCom conference next year.

GizmoCrazed - November 1, 2010 0
Today we have compiled some amazing pictures from world of wildlife photography, captured with the help of an iPhone. From close-ups of creepy-crawlies, to frogs...

A Clever New Strategy for Treating Cancer, Thanks to Darwin