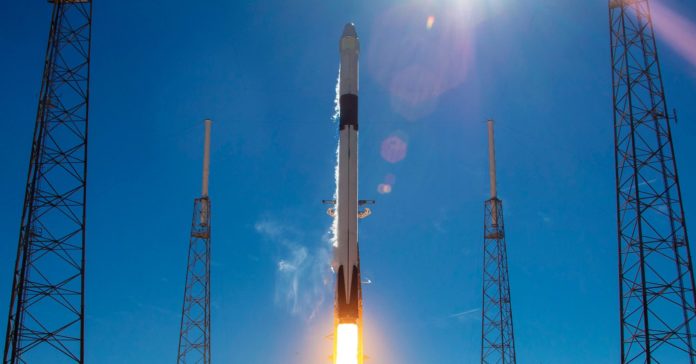 Port Canaveral, east of Orlando, was a hub of activity this past week as SpaceX officials attempted to rescue a wayward booster that had fallen into the ocean just off Florida’s space coast. A crowd of onlookers showed up day after day to glean insights into the secretive company’s recovery efforts. Some people even booked helicopter tours in hopes of catching a glimpse of the booster.

The booster in question, dubbed B1050 by SpaceX, made its one and only flight on December 5, a mission to deposit a Dragon cargo capsule into space. It was then supposed to return to land in what would have been the company’s fourth land landing this year. After completing its primary mission objective, the booster conducted a series of planned aerial maneuvers required to return to solid ground.

At first its descent appeared to be on track; it wasn’t until its landing burn was about to begin that it became visibly obvious that something wasn’t quite right about its trajectory. Instead of sticking the landing, B1050 went for an unscheduled swim in the Atlantic Ocean. The booster’s nautical visit was a relief to many, as a land touchdown would likely have been accompanied by an explosion. SpaceX later said that one of its grid fins, which help stabilize the vehicle as it plummets through the atmosphere, was at fault.

The once-shiny black-and-white booster, now scorched from its trip through the atmosphere, floated for two days like a giant buoy on top of the water before crews finally ventured out to retrieve it. With its landing legs splayed out, B1050 bobbed like a piece of driftwood while two SpaceX recovery ships kept it company.

On Dec. 7, the booster was towed into port and docked next to one of the company’s drone ships, named Of Course I Still Love You. SpaceX’s recovery crew still had to hoist the booster onto the deck and remove its deployed landing legs. (A much more difficult task when the booster is floating in the ocean versus standing on the deck of a ship). It took another four days for crews to remove the landing legs and the grid fins to properly assess the damage sustained by the booster.

For the most part, B1050 looked in pretty good shape considering the many days it had floated in corrosive, salty seawater. The interstage—a black portion that connects the rocket’s two stages—was badly damaged, but overall the booster looked to be in decent shape. After losing its legs, B1050 sat like a lonely piece of scrap metal on a dock for several days before finally being hauled into one of the company’s facilities, presumably to be dismantled.

SpaceX has yet to disclose the official reason why B1050’s landing went awry. Windy conditions on the day of the launch could have complicated the landing, but soon after B1050 plopped into the ocean, CEO Elon Musk tweeted about the faulty grid fin and reported that the booster was still transmitting data. Earlier in the year, a previous Falcon 9 booster had intentionally landed in the water but had to be scrapped, so the fact that this one still functioned was a promising sign. Always the optimist, Musk, even tweeted that the company might reuse the booster on an internal mission (hello Starlink). That no longer looks at all likely.

This mishap marks the first time that the Falcon has failed to stick a landing on solid ground since SpaceX began recovering boosters. Although the company’s philosophy has always been that a fully (and rapidly) reusable rocket is the key to dramatically reducing the cost of spaceflight, not all of its flights fit that model.

A booster needs to have enough fuel remaining post-launch to direct itself back to a landing site, and some missions are too heavy for that to work. Giant communications satellites, for example, demand too much fuel during their ascent to allow for a landing burn. This week, SpaceX is slated to attempt one such launch, its final Falcon flight of the year, which will carry a GPS satellite into orbit for the US Air Force. It is SpaceX’s first national security launch and the first of multiple satellites the Air Force plans to send up on a SpaceX ride.

The mission will be significant as it marks the first for SpaceX as a military contractor under the Evolved Expendable Launch Vehicle program. The company scored this contract, valued at $82.7 million, in 2016. It’s a first step in winning the Air Force over to the reusable rocket model—assuming the company gets its booster landing game back on track.